The Pentagon Memorial park consists of 184 memorial units, each of which are dedicated to an individual victim of the September 11th attacks, by its unique placement within the collective field.
(124)

On September 11, 2001, terrorists crashed Flight 77 into the Pentagon, killing the 59 passengers on board the aircraft and 125 military and civilian personnel who were working inside the Pentagon. Shortly after the attack, the United States Congress authorized the Secretary of Defense to create a permanent memorial on the grounds of the Pentagon.

1/27/16 - **WEATHER UPDATE** The Pentagon Memorial is now open to the public, but only the pathways between the memorial benches have been cleared. Please take caution while visiting the Memorial.

1/26/16 - **WEATHER UPDATE** The Pentagon Memorial is expected to reopen to the public later this afternoon (Tuesday 1/26), though snow and ice are still being cleared from the sidewalks. Check back for an update later today.

**WEATHER UPDATE** Due to impending blizzard, the Pentagon Memorial will close to the public beginning Friday afternoon, January 22 through Monday, January 25 (dependent upon cleanup/safety conditions). Check back for more details.

There are some big updates to our website (www.pentagonmemorial.org) along with a brand new mobile site option, thanks to Esri! Check it out for information about the future 9/11 Pentagon Memorial Visitor Education Center

UPDATE: Effective Saturday, March 14, 2015 the Pentagon Memorial will REOPEN to the public. Thank you for your patience and understanding while the Memorial underwent necessary maintenance.

UPDATE: Due to necessary maintenance, the Pentagon Memorial is still CLOSED (as of Thursday, March 12). Please check back for updates.
Thank you for your patience and understanding.

NOTICE: The Pentagon Memorial is currently CLOSED due to weather related safety concerns. Please check back for updates.
Thank you!

Yesterday, the Escort to Arlington made a stop at the Pentagon to place wreaths in memory of those whose lives were lost on 9/11. Photo by HCTC Students

Wreaths Across America - Official Page and a record number of volunteers including 9/11 families, survivors, first responders, DoD leadership, Gold Star Mothers and members from each branch of the military placed 184 wreaths along the fence at the Pentagon Memorial today in memory of all those lost on September 11, 2001. We are forever grateful to Wreaths Across America for continuing to include the Pentagon Memorial in this special and meaningful tradition.

Wishing everyone happy and safe holidays.

To watch the re-broadcast of the entire ceremony, please go to:

Watch the dedication ceremony live at 10am EST at 911memorial.org.

Today, we dedicate the National September 11 Memorial Museum. With its opening, we take a major step forward in fulfilling a solemn commitment to ensure that an important part of American history is never forgotten.

We invite you to join us at 10:00 a.m. [EST] for the Dedication Ceremony by watching it live on our website at http://www.911memorial.org. #911Museum #Honor911 #HistoryRemembered

Spring is near! Thanks to one of our docents for sharing this photo today.

Anyone planning to visit the Pentagon Memorial this spring? We encourage you to share your thoughts and experiences here on our page, Twitter @Sept11PMFund and via our Audio Tour 202-741-1004 (message option at the end). 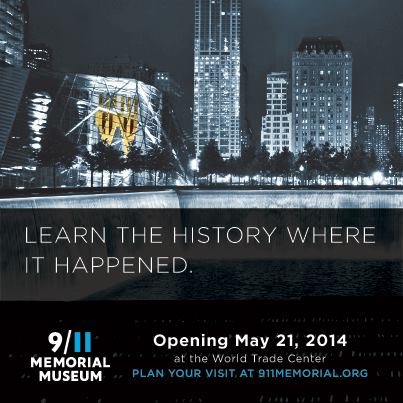 We are proud to announce that the National September 11 Memorial Museum will open to the public on May 21, 2014. For more information visit: http://911memorial.io/ONA3lS #911Museum #Honor911 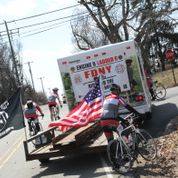 This entire experience has been unbelievable

The FDNY Trident Ride firefighters laid a wreath at the Pentagon Memorial today after stopping in DC along their 18-day cycling route from NYC to The National Navy UDT SEAL Museum in Florida to escort a 14-foot piece of steel from the World Trade Center.

Thank you all for your efforts and for taking the time to remember and honor the 184 lives lost at the Pentagon on 9/11.

We wish you safe travels to Florida!

The Pentagon Memorial's Audio Tour can also be experienced through our website!

Listen to the Audio Tour below, complemented with photos.
(http://pentagonmemorial.org/explore/biographies/audio-tour)

Another photo shared by one of our docents. Even in the snow, the water beneath each memorial unit continues flowing.

One of our docents braved the cold this past weekend and shared this beautiful photo of the Memorial in the snow...so we are sharing with all of you!

"It's time to give future generations a place to learn what happened here."

Vimeo is the home for high-quality videos and the people who love them.

We love to hear about personal experiences at the Memorial. Please share yours with us here!

Today at the Pentagon Memorial.

Anyone get to enjoy seeing the Memorial in the snow? Always a beautiful sight. 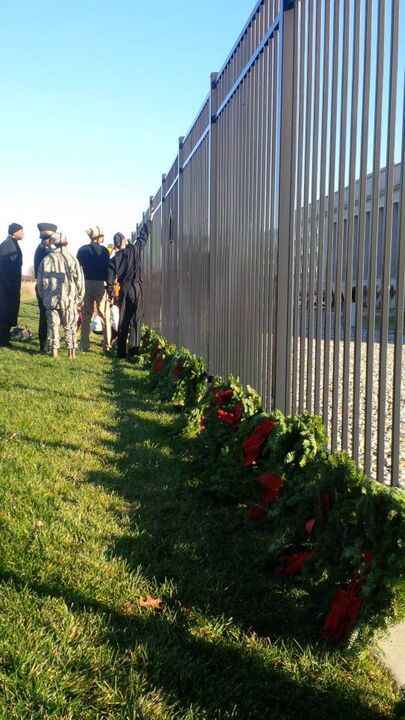 Thank you to all of those who volunteered with Wreaths Across America at the Pentagon Memorial in December - 184 wreaths were hung along the fence in honor of each victim from September 11, 2001.

Can you help share our page to reach 2,000 before the year is up? Stay tuned for more updates about the 9/11 Pentagon Visitor Education Center on our Facebook and Twitter pages.

Happy and safe holidays to all!

Wreaths Across America - Official Page We are always grateful for your support in helping to honor those lost at the Pentagon on September 11, 2001. We are looking forward to hanging another 184 wreaths at the Memorial this weekend.

(photo courtesy of one of the Pentagon Memorial's wonderful Docents)

Receiving a medal after crossing the finish line of a race (or a finisher coin, like at the Army Ten Miler) is a reminder and mark of many hard miles run for each participant. Someone left their coin on Major Milam's memorial unit this past Sunday after the race. It was a very touching sight to see.

Thank you to all those who ran to remember.

The Army Ten Miler had thousands of runners passing by the Pentagon Memorial post-race. Thank you to all who visited - we hope you had a great race! It was certainly a beautiful day for a run.

The National 9/11 Pentagon Memorial is open to the public during the government shutdown - 24 hours a day, 7 days a week.

UPDATE: The National 9/11 Pentagon Memorial is OPEN to the public and will remain open. Thank you for your questions and for visiting the memorial.

For answers to frequently asked questions, please visit: http://www.pentagonmemorial.org/plan/faq The above address is the physical location of the Pentagon Memorial. To contact the Pentagon Memorial Fund directly, we may be reached at: P.O. Box 3879 Gaithersburg, MD 20885

Be the first to know and let us send you an email when National 9/11 Pentagon Memorial posts news and promotions. Your email address will not be used for any other purpose, and you can unsubscribe at any time.

Get Involved -- 100 Opportunities to Organize a 9/11 Flag of Honor Across America Memorial on September 11, 2021 -- the 20th Anniversary of September 11, 2001. Apply Today @
https://www.youtube.com/watch?v=GEanGqcyW4Q&t=44s
On 9/11/2001 the Kingdom of Saudi Arabia committed an act of war against the United States. Rather than respond as we did following a less ambitious decapitation strike at Pearl Harbor, our leaders and the media have actually conspired with the Kingdom to whitewash their responsibility for 9/11. Whether they are traitors or useful idiots is for the people and history to judge. Saudi Arabia is the primary financier of the effort to subvert the nation through their Islamist ideology. It is estimated that at least 80% of US mosques were established with and still receiver significant funding from Saudi agents. Saudi Arabia is also conducting psychological operations through schools ranging from middle school to prestigious universities which demonize western democracies, blaming them for the ills of the Islamic world and advancing Islamic arguments and rituals. Saudi Arabia has hired armies of attorneys and lobbyists that shamefully fight the legitimate claims of the 9/11 families. They have dragged us into a genocidal war in Yemen and are attempting to spark one with Iran. They are also arming to the teeth and even getting nuclear technological assistance that could potentially result in the development of a nuclear weapon in the hands of a nation that committed 9/11. We must stop them.
Please hang a red bandana at the memorial and take a photo! We Will Never Forget!
I'd like to share a song and video that I made about 9/11. Sincerely Joseph Dauria
Please.....Can someone put one or more red bandanas at the Pentagon Memorial to honor the people who were lost. Red Bandana Day is 9-11 and we hang red bandanas in honor to all lost in D.C., NY and Pennsylvania. Please join our group on Facebook RED BANDANA DAY!
I was one mouse-click away from taking Flight 77 on that day. Instead I chose to fly to LA through Dallas, where I was grounded for 3 days, as all flights were cancelled. I will always keep everyone who died on 9/11 in my thoughts and my prayers.