The Legal Aid Society of Birmingham is a nonprofit 501(c)(3) organization founded in 1952 by the Birmingham Bar Association to provide legal help for indigent persons in the Birmingham area. Initially a referral agency housed within the Bar Association offices, it has grown over the years to a staff of 25, 20 of whom are licensed attorneys, and maintains three offices in Jefferson County.

The Legal Aid Society of Birmingham is a nonprofit 501(c)(3) organization founded in 1952 by the Birmingham Bar Association to provide legal help for indigent persons in the Birmingham area. Initially a referral agency housed within the Bar Association offices, it has grown over the years to a staff of 25, 20 of whom are licensed attorneys, and maintains three offices in Jefferson County.

Happy Holidays from the Legal Aid Society of Birmingham. Just a few photos from our holiday party 2021!

was a success! Thank you for your generosity. Thank you for believing in our mission... to provide quality legal representation to children and indigent adults. www.legalaidbirmingham.com

One week to Unleash Generosity

April is National Child Abuse Prevention month. If you see something, say something.

This is great news. So many runaways fall victim to human trafficking.

FRESNO, Calif. (KMPH) — Greyhound bus is teaming up with the National Runaway Safeline to safely bring runaways back home. As part of the Home Free Program, free rides home are being offered to runaways between the ages of 12 and 21. Each year, the program helps provide around 400 kids and tee...

was a success! Thank you for your generosity. Thank you for believing in our mission... to provide quality legal representation to children and indigent adults. www.legalaidbirmingham.com

Check out our new video that was added to the new website 😀
https://www.legalaidbirmingham.com

The Legal Aid Society of Birmingham is a non-profit organization that provides court-appointed legal aid in Birmingham, Alabama. Visit our donate page to give to the cause!

made easy on our new website: www.legalaidbirmingham.com. Be intentional with your giving 💜

Be intentional with your . www.legalaidbirmingham.com

Martha Jane Patton was raised in Decatur, Alabama. As a teenager, she was a member of the United Christian Youth Movement and was involved in protests promoting racial and socioeconomic justice, such as the first protest against George Wallace in his home state. She was proud to say that she once spent a night in jail for “parading without a permit.”

Martha Jane attended Birmingham Southern College on a scholarship she won from the National Council of Teachers of English and graduated in 1968 with an undergraduate degree in English. She first spent time working as an assistant in a law office in downtown Birmingham, then went on to work with the Selma Inter-Religious Project in Tuscaloosa, a nonprofit which served the interests of the rural poor people in the southwest section of the Alabama Black Belt. There she served as an administrator and organizer from 1971-74.

Following her time with the Selma Project and before heading to law school, Martha Jane worked as a grant writer in a study of juvenile justice systems in 10 different Alabama counties then for a short time as an ombudsman in a girl’s state detention facility in Chalkville, Alabama. It was during this time that she developed an interest in juvenile justice, which would later become her focus during her time with Legal Aid.

Inspired by the attorneys working on the Selma Project, as well as the women’s movement for equality at the time, Martha Jane applied for law school. She received her Juris Doctor from Cumberland School of Law and was admitted to the Alabama Bar in 1978. She practiced as an attorney for 18 years before taking on the director role at Legal Aid Society. During that time, she often represented juveniles as well as employees in employment discrimination cases.

Martha Jane became Executive Director of the Legal Aid Society of Birmingham in 1998 and served tirelessly and devotedly in that role until her retirement 18 years later in 2016. There, she helped ensure legal representation for juveniles and indigent adults. Even after her retirement, she remained very active in Birmingham and in the legal community.

Martha Jane was an active long-time member and leader at her church, St. Andrew’s Episcopal Church in Birmingham’s Southside, where she served as her church’s liaison with the citizen’s policy project and non-profit, Alabama Arise. She was a member of the Episcopal Diocese of Alabama’s Commission on Truth, Justice and Racial Reconciliation and a supporter of Project Hope, a nonprofit working to abolish the death penalty in the state of Alabama.

In addition to issues surrounding racial and economic justice, Martha Jane was a champion of women’s rights. She helped form an Alabama chapter of the Women’s Political Caucus, worked with the Foundation for Women’s Health, and was appointed by the governor to a task force on infant mortality in Alabama. She was also a board member of the National Conference of Women’s Bar Associations and was an inspiration to young women interested in activism and a career in law.

Having witnessed the “white flight” that lead to urban decline in Birmingham after the 1950’s, Martha Jane was very committed to “being here and being a part of change in Birmingham.” She and her husband, Lynn, were committed to raising their children in a diverse environment and as integrated members of their community, so they remained in the city and sent their two sons to Ramsay High School, where Martha Jane was very involved with the PTA. She was also a founding member and the first president of Friends of Avondale Park, formed in 1989, which is a nonprofit organization dedicated to the restoration, maintenance, and full utilization of Avondale Park.

Martha Jane was first diagnosed with breast cancer in 2003. After a long and courageously fought battle, she succumbed to her cancer in the summer of 2020. During her battle, she always maintained her positivity, generosity, and joy for life. She will be sorely missed by her family, friends, neighbors, colleagues, and all those whose lives she touched. Her indelible impact on the Birmingham community will be felt for many, many years to come, and she will be remembered by all for her vivacious spirit, easy laugh, fierce commitment to justice, and tremendous capacity for love.

A few of us, at last night’s holiday gathering.

A special shout out to all attorneys who serve as guardians ad litem in abuse and neglect cases in the Jefferson County Family Court, especially those in the Legal Aid Family, for your tireless dedication to protecting children. Mayor Randall Woodfin announced today that the city will be blue for the Month of April in honor of National Child Abuse Prevention Month. In a single year, 13 children lost their lives in the State of Alabama due to child abuse. Thirteen pinwheels were planted at City Hall today in their honor. There's no excuse for child abuse!

Serving the community with a smile...

Serving the community with a smile...

Legal Aid honors outgoing Board Member Barry Ragsdale with a Flame of Justice for his outstanding service.

Celebrate with us after work at the best new venue in town, The Haven! Drinks, Food, live music and a room full of lawyers.. what more could you want? Tickets $50, student discount available but ID required.

It's official: Jequette Edmonson will be the new Executive Director of Legal Aid! Jequette has experience in all the courts where we work, and is a wonderful communicator (since her prior career was in journalism/PR). Thanks to our Trustees on the Search Committee for their hard work, and to Clarus Consulting for their able assistance in this process.

Chalk up a win for our very own Legal Aid lawyers, who represented the children in this case.

Georgia court strikes a blow for those too poor to post a bond. 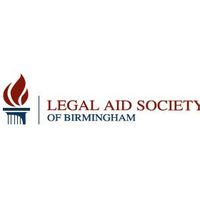 Executive Director Martha Jane Patton is retiring later this spring. For a downloadable job description and information on how to apply, see our website: www.legalaidbirmingham.com

The president is adopting Justice Department recommendations that also include banning solitary for prisoners who have committed low-level infractions.

We need to talk about an injustice

If you live in Birmingham and missed last night's speech at Highlands United Methodist Church by Bryan Stevenson, check out his TED Talk, the best one EVER: http://go.ted.com/CxqH

In an engaging and personal talk -- with cameo appearances from his grandmother and Rosa Parks -- human rights lawyer Bryan Stevenson shares some hard truths about America's justice system, starting with a massive imbalance along racial lines: a third of the country's black male population has been…

"We've chosen the response of the deprivation of liberty for a historically aggrieved group, whose liberty in the United States was never firmly established to begin with."

In this animated interview, the sociologist Bruce Western explains the current inevitability of prison for certain demographics of young black men and how it's…

The 20 lawyers who work full-time for Legal Aid have no other professional obligations except that of representing our indigent clients, and we derive no income other than our salaries from Legal Aid. Individual contributions, while they do not provide a significant amount of funding, do allow for staff training, technology needs, and other expenses required for practicing law.

Be the first to know and let us send you an email when Legal Aid Society of Birmingham posts news and promotions. Your email address will not be used for any other purpose, and you can unsubscribe at any time.

Send a message to Legal Aid Society of Birmingham:

Other Public & Government Services in Birmingham (show all)