Serving to Heal...Honored to Serve!

Don’t be a bystander, take action, and speak up when you see someone in need of assistance.

This morning, 13 Regional Health Command-Atlantic teams began competing in the 2022 RHC-A Best Leader Competition, April 25-28, 2022, on US Army Fort Benning, Georgia, to be named RHC-A’s best leaders. To win, Soldiers must demonstrate military bearing, communication skills, knowledge of various military subjects and the ability to perform a variety of Soldier/Warrior skills at a level above their peers. Winners will represent RHC-A in June at the Army Medicine BLC.

Winners will be announced April 29 at 9 a.m. during a ceremony livestream here. Follow us daily for competition updates and to find out RHC-A’s best leaders.

Congratulations to SSG Ryan Lavergne, Martin Army Community Hospital, on his graduation today from US Army Airborne School, Fort Benning! Continue to set the bar high and lead the way! The A Team is Ready Now!

| 22 APR 2022 | Regional Health Command-Atlantic CSMs getting after PRT at the Tactical Athlete Performance Center (TAP-C) at US Army Fort Benning. The A Team is Ready Now!

Teams from around the region will be competing in the 2022 Regional Health Command-Atlantic Best Leader Competition at Fort Benning, Georgia. Winners will compete in the Army Medicine best leader competition in June. Make sure you follow us for event coverage.

Happy Friday! It was great to see you, Sir.

LTG Dingle and CSM Hough visiting some of the teammates on the A-Team at Troop Command-FBCH.

Congratulations to the Troop Command-FBCH Non Commissioned Officers on their reenlistment at the National Historical Publications and Records Commission. Your continued commitment, sacrifice, and service to RHC-A, MEDCOM, and the U.S. Army is immensely appreciated!!

Congratulations to one of our stellar Eagle medics, SSG Poulard on his recent accomplishment of becoming a Drill Sergeant!
Face of the Army Hooah!

Kudos and Soar above the rest! 🦅

#GoldStarspouses whose service member died while on active-duty status receive either the Gold Star Lapel Button or the Lapel Button for Next of Kin of Deceased Soldier. When you see someone wearing these symbols of honor, please respect that they have lost a loved one who selflessly served our nation.

On 5 April, we remember and honor surviving spouses of fallen service members.

“Gold Star spouses are, and will always be, a treasured part of the Army Family. Gold Star
Spouses’ Day is one opportunity to recognize their sacrifice and resiliency.“ LTG Douglas Gabram, Commanding General, Army Installation Management Command

Battle Field Circulation to Winn Army Community Hospital and Tuttle Army Health Clinic afforded me the opportunity to witness the reenlistment of MSG Moore making the awesome decision to go indefinite and become part of the Army Career Status Program and to recognize SGT Webb a Medical Logistics NCO for her exemplary performance.

Today, we honor the nation’s Vietnam War Veterans and their families for their service and sacrifices.

“Every service member of the Vietnam generation should know that their sacrifices mattered and that their service made a difference.” — President Joe Biden

"And one of the most painful chapters in our history was Vietnam -- most particularly, how we treated our troops who served there. You were often blamed for a war you didn’t start, when you should have been commended for serving your country with valor. You were sometimes blamed for misdeeds of a few, when the honorable service of the many should have been praised. You came home and sometimes were denigrated, when you should have been celebrated. It was a national shame, a disgrace that should have never happened. And that's why here today we resolve that it will not happen again." -President Barack Obama

This week I visited McDonald Army Health Center. During my visit, I conducted an LPD discussing Soldier's quality of life, the ACFT, and the way-ahead for Army Medicine. I even had the oppurtunity to observe a reenlistment! Congratulations on your reenlistment CPL Crague!
#ATeam l #ReadyNow l #PeopleFirst

Thank you to Naval Medical Forces Atlantic, Rear Admiral Via and Command Master Chief Pryor for stopping by Regional Health Command-Atlantic today. Discussing readiness around the Atlantic Region for Sailors and Soldiers is what we mean by total force!

Way to lead by example SGT Howe! With your commitment, dedication, and perseverance, you will continue to set the bar and lead the way!

Howe said he plans to earn the Expert Field Medical Badge and complete Air Assault School in the future.

135 years ago today, what we now know as the Army Enlisted Medical Corps was formed. Congratulations on yet another year of significant and valued service - Happy Anniversary! Through their contributions and sacrifices, #AMEDDEnlistedCorps members have carried out the U.S. Army Medical Department's mission since 1887, which is to provide a competent and self-disciplined team of professionals who support the Army through expert clinical, tactical scientific, and administrative operations, enabling high reliability units and Soldiers of character and commitment. #ArmyMedicineIsArmyStrong #ReadyNow #RHCA

They are one of 23 teams competing for the U.S. Army #BestMedic2022 title Jan. 24-28 on Fort Hood, Texas. #BestMedic winners are considered to be the most technically competent, physically and mentally tough medic team in the U.S. Army.

Last Saturday, we had the privilege of remembering our fallen Veterans and honoring those who served as we participated in a wreath-laying ceremony at Arlington National Cemetery.

Thank you Martin Army Community Hospital! This is a tradition that I look forward to every year.

As I reflect, it’s a way for leadership at all levels to give back to the Soldiers and Civilians and show them how much we appreciate the hard work and dedication that they put in every day!

We’re here! If you see me around, don’t be shy! To my junior and senior Soldiers, I’m looking forward to talking about the upcoming transition and training.

We remember the attacks on #PearlHarbor 80 years ago that resulted in the death and injuries of thousands of service members and civilians, the courage of those who defended this nation and the strength this nation showed as it banned together when the United States entered World War II.

Be the first to know and let us send you an email when RHC-Atlantic Command Sergeant Major posts news and promotions. Your email address will not be used for any other purpose, and you can unsubscribe at any time.

In a profession of arms, those who have earned the title Combat Medic are asked to leave their families, engage our nation's enemies, and ensure our warriors make it home. Take a small glimpse as some of the Region's best NCO's and Soldiers battle it out to earn the title of Best Medic.

The Army Nurse Corps celebrates 118 years on February 2. Thanks to our Army nurses past and present for your service, dedication and skill. The Regional Health Command-Atlantic salutes you! @Army Medicine 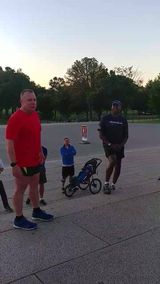 Great time running on the National Mall today with the Soldiers, civilians and families of the Regional Health Command-Atlantic. A few words on the run and the symbolism of running near memorials dedicated to great leaders and great service members and then we were of for a nice run in our Nation's Capital.