Judge Jackson gets emotional as she talks about her first experiences at Harvard and advice she'd give to aspiring students. https://www.c-span.org/video/?51...

"I think this is really indicative of the larger issue of racism that is endemic in policing today," said Erika Jacobsen White, another of Miles' attorneys. "The natural outgrowth of this type of overt and systemic racist mentality in policing is what leads to the kind of police abuses we are seeing across the country."

A group of police officers in Montgomery County, Maryland, are being accused of repeatedly making hateful comments against people of color in a group text message chain -- including that they hoped Black Lives Matter protesters would die.

I’m proud to support my courageous client, Officer Mark Miles, as he takes a stand against racism and bigotry.

Mark Miles, a Black officer with the Maryland-National Capital Park Police, says in a lawsuit that his white supervisor and other officers made hateful comments in a work-related text chain.

First Shift Justice Project is happy to announce that we have expanded our full service practice into Virginia! If you or someone you know is having issues at work related to pregnancy, please reach out here: https://firstshift.org. We help families across the entire Commonwealth!

Honored to join these talented Womxn of the APA tonight!

Accountability is a first step. We must keep fighting for real justice.

Join me for Fund Her's Women’s Equity Salon this Sunday, March 21st at 4pm PT/7pm ET. The event is going to be a panel discussion on the feminization of poverty, equal pay, health inequity, and the disproportionate impact of the pandemic on women.

The conversation will be led by Saru Jayaraman, President of One Fair Wage and Director of UC Berkeley's Food Labor Research Center. The event will feature an incredible panel of women committed to the fight for justice - including Virginia State Senator Jennifer McClellan, who is running for Governor of Virginia. We are also proud to welcome remarks by Congresswoman Barbara Lee!

Honored to be joining the Board of this amazing organization!

Erika Jacobsen White, Esq. updated their information in their About section.

Erika Jacobsen White, Esq. updated their information in their About section. 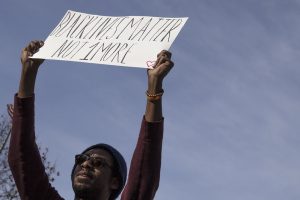 "Under Supreme Court precedent, a victim of police brutality must demonstrate that, at the time of the abuse, the courts had already held that behavior to be unconstitutional. Too often, courts demand an exact match between the facts of the current case and facts of a previous case to show that it was already “clearly established” that the conduct in question was illegal. That can pose an impossible bar for many victims of police brutality. Plus, qualified immunity gives courts an out to avoid deciding whether police abuses were, in fact, unconstitutional—meaning courts are less likely to create that “clearly established law” necessary for future plaintiffs....

The urgent need for this legislation is made clear by a recent Reuters investigation, which found a dramatic spike in successful attempts by police to use the law as a shield from accountability: During a two-year span from 2005-2007, appellate courts ruled in favor of police in qualified immunity cases 44% of the time; just over a decade later (2017-2019), that grew to 57%."

Until there is true accountability in our country, there can be no true healing or reform.

As civil rights lawyers, and as stewards of the justice system, we have a direct obligation to stand against this oppression.

Pregnant employees are not "guinea pigs" to be used for market research. Proud to stand up with to Ms. Johnson against discrimination and retaliation at Natera, Inc. #BumpedOut #MomsToo @CNN @nytimes @CBSSF https://www.cnn.com/2018/12/20/health/planned-parenthood-pregnant-employees-allegations/index.html

Planned Parenthood and other organizations that serve or cater to women are defending themselves against allegations of various forms of discrimination against pregnant employees.

Jacobsen White Law, P.C. is honored to stand up beside Melissa Blain Johnson against the hypocrisy at Natera, Inc., who discriminated against her because of her pregnancy and retaliated against her when she complained. The pervasiveness of pregnancy discrimination is deep, and we must stand up.

No more getting #BumpedOut of the workplace.

Employers that champion women face accusations of discriminating against their pregnant workers, showing how widespread the problem is in American workplaces.

As an employee in California you are entitled to up to two hours PAID time off to vote at the beginning or end of your shift.

You need to give your employer two business days advanced notice.

Does your employer know your rights? Employers must post a notice of employees’ voting rights at least 10 days before a statewide election.

Get registered and find your polling place here: https://www.sos.ca.gov/elections/polling-place/

If you are not currently registered or you registered to vote after October 22, 2018, please see our Conditional Voter Registration page.

Honored to represent Jane Doe in standing up for justice after being sexually assaulted by a massage therapist at the Claremont Hotel & Spa, A Fairmont Hotel. The massage therapist who did this is still employed there. #BelieveWomen

The Claremont Hotel and Spa is facing claims from a guest who says she was sexually assaulted by her massage therapist during an appointment last December at the luxury resort.

I am honored to represent Ms. Johnson together with my colleague Jayme Walker at Gwilliam, Ivary, Chiosso, Cavalli & Brewer in standing up for women's rights. No more getting baby #bumpedout of the workplace.

Pregnancy discrimination is still an issue for women in the workplace, and one former employee claims it even happened to her at a company that's all about helping pregnant women.

Firing Pregnant Women Is Worse For Employers In The Long Run

Discrimination because of your pregnancy or pregnancy related disability is illegal. Know your rights.

“When a man has to leave work due, say, to severe nausea incident to chemotherapy, it is something the employer has to live with: It’s seen as the cost of hiring human beings. If a woman has to leave work, say, due to severe nausea incident to pregnancy, she is seen as demanding special treatment. Men are still the measure of what is seen as the inevitable cost of hiring human beings. Anything related to women alone is seen as somehow extra.” - Joan Williams

Analysis | The industries with the worst sexual harassment problem

Harassment is about power. Many of the same industries plagued by sex harassment are also entrenched in cultures of racism. We need to think about where these forms of social violence intersect and fight harassment in all of its iterations.

Workers in food service and retail are at much higher risk, research says.

On sexual harassment: I don't need a thicker skin, you need a conscience.

It takes courage to stand up.

Michelle Threadgould says that Amber Tamblyn's recent New York Times op-ed is a stark reminder of how many people enable harassers and predators to thrive at women's expense.

Yesterday, thanks to lobbying pressure from the biggest credit reporting agencies, a House subcommittee held a hearing on whether to gut the consumer protections of the Fair Credit Reporting Act (FCRA)—one of the few tools around that offers some...

The Fair Employment and Housing Act protects LGBTQ workers in California, but for employees in states without solid civil rights laws, this could have a devastating impact. #nojusticefromtheDOJ

The unusual brief came in a Long Island case that could prove to be a test of whether federal anti-discrimination laws should cover gay workers.

Beginning January 1st, California now prohibits wage discrimination based on race and ethnicity in addition to gender. Further, you cannot be retaliated against for disclosing your wage to your colleagues.

It will be the most progressive wage equality law in the country.

Do not be silent. Do not cower in fear. Stand up. Stand up with dignity. Stand up. The greatest walls we must destroy are those within ourselves. #IWillStandWithYou #LoveNotHate #BlackLivesMatter

Although most Americans don't have the benefit of paid sick leave, California's Healthy Workplace Family Act went into effect January 1, 2015 and grants all employees who have completed a 90 day probationary period with an employer, and who worked at least 30 days in the last year in California, to accrue paid sick leave. Employers must allow employees to take a minimum of 3 days or 24 hours of leave per year. Sick leave can be used for the employee's own medical condition or to care for a family member. Sick leave can also be used by victims of domestic violence, sexual assault, or stalking - and the law prevents retaliation for taking accrued sick leave. It isn't much, but it's a start.

Hillary Clinton is not alone in attempting to work through illness - millions of Americans do it every day.

Honored to be recognized as a Northern California Rising Star by Super Lawyers for the fifth year in a row!

Why the Orlando Attack Will Not Be an Isolated Crime

This is the worst mass shooting in U.S. history. Discriminatory attitudes toward LGBT people are still common, despite advances in LGBT rights over the past several years.

Be the first to know and let us send you an email when Erika Jacobsen White, Esq. posts news and promotions. Your email address will not be used for any other purpose, and you can unsubscribe at any time.