For two days only, Fairchild Air Force Base will be opening up it's gates to the public for SkyFest 2010. Marvel at demonstrations from the United States Air Force Thunderbirds, and Wings of Blue Parachute Demo Team.
(8)

Admission and parking are FREE.

Thank you very much for your interest in our newly launched Fairchild Air Force Base page! Unfortunately we gave you the wrong link! We're extremely sorry for the inconvenience and sincerely hope that you'll choose to Like this new page. Again sorry for the trouble!

This is the official page for Fairchild Air Force Base, Wash., home of the 92nd and 141st Air Refueling Wings. Visit our official Web page at: www.fairchild.af.mil Contact us at: [email protected] and follow us on twitter: @TeamFairchild

New photos from an awesome turnout of this year's Skyfest! If you missed it today or just want to see THE greatest demo team perform again, it will all happen again on Sunday--don't miss out!

Check out our new photos from Friday's practice show!

NEW!!!!
Maps for traffic, parking, and bus routes during Skyfest!

Check out our newly added attraction at this year's Skyfest!

Smoke-N-Thunder jet car demonstrates the power of turbine engine racing at military airshows on behalf of the USO and the air force reserve. Bill Braack the pilot of the jet car races airplanes to demonstrate the speed of turbine racing. 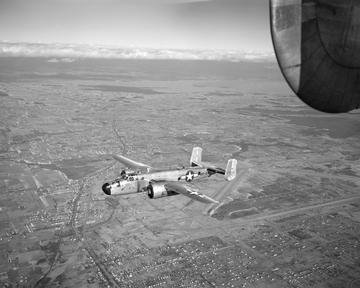 Fairchild's SkyFest is back Summer 2010! In appreciation for the outstanding support that the base has received from its local community, Fairchild will once again host one of the biggest and most talked about events in the Inland Northwest. In 2008 more than 220,000 people attended SkyFest--Fairchild's largest crowd ever. Local community members had the opportunity to tour a wide array of military aircraft and watch aerial demonstrators, representing nearly every branch of the military, soar through the skies. Skyfest 2010 scheduled for 24-25 July. The two-day show is free and open to the public and will feature Air Force aviation at its best with a demonstration by the U.S. Air Force Flight Demonstration Team, the Thunderbirds. The U.S. Air Force Thunderbirds present precision aerial maneuvers to exhibit the capabilities of modern high-performance aircraft and the high degree of professional skill required to operate those aircraft. You won't want to miss this rare opportunity to experience the capabilities of the world-renowned Thunderbirds. The air show is one of the few times that the gates of the base are open to the public, offering a unique opportunity for members of the community to see up close USAF aircraft on display, talk to Air Force personnel and view the artistic and technical abilities of some of the world's best aerobatic and demonstration pilots. More information on the Thunderbirds can be found on their Web site http://thunderbirds.airforce.com/. For more information on Skyfest 2010, contact the 92nd Air Refueling Wing Pubic Affairs Office at (509) 247-5705. While this is an open forum, it's also a family friendly one, so please keep your comments and wall posts clean. In addition to keeping it family friendly, we ask that you follow our posting guidelines here. If you don't comply, your message will be removed: -We do not allow graphic, obscene, explicit or racial comments or submissions nor do we allow comments that are abusive, hateful or intended to defame anyone or any organization. -We do not allow solicitations or advertisements. This includes promotion or endorsement of any financial, commercial or non-governmental agency. Similarly, we do not allow attempts to defame or defraud any financial, commercial or non-governmental agency. -We do not allow comments that suggest or encourage illegal activity. -You participate at your own risk, taking personal responsibility for your comments, your username and any information provided. Also, the appearance of external links on this site does not constitute official endorsement on behalf of Fairchild Air Force Base SkyFest 2010 or U.S. Air Force. If you're looking for the official source of information about SkyFest 2010 please visit our homepage at http://www.fairchild.af.mil/news/skyfest2010/index.asp

Be the first to know and let us send you an email when Fairchild Air Force Base Skyfest 2010 posts news and promotions. Your email address will not be used for any other purpose, and you can unsubscribe at any time.

Other Government Organizations in Spokane