Amphibious Construction Battalion TWO (PHIBCB TWO) traces its roots to the pontoon operation battalions of World War II that participated in every major amphibious assault, beginning with the invasion of Sicily. By the use of pontoon causeways, barge-mounted cranes and pontoon ferries, these battalions gave the amphibious forces the ability to quickly off-load the large quantities of troops and ca

Amphibious Construction Battalion TWO (PHIBCB TWO) traces its roots to the pontoon operation battalions of World War II that participated in every major amphibious assault, beginning with the invasion of Sicily. By the use of pontoon causeways, barge-mounted cranes and pontoon ferries, these battalions gave the amphibious forces the ability to quickly off-load the large quantities of troops and ca

EN2 (SCW) Li re-enlisted into the United States Navy today by LT (SCW/SW) Wiezorek. Thank you for all of your hard work and sacrifice! 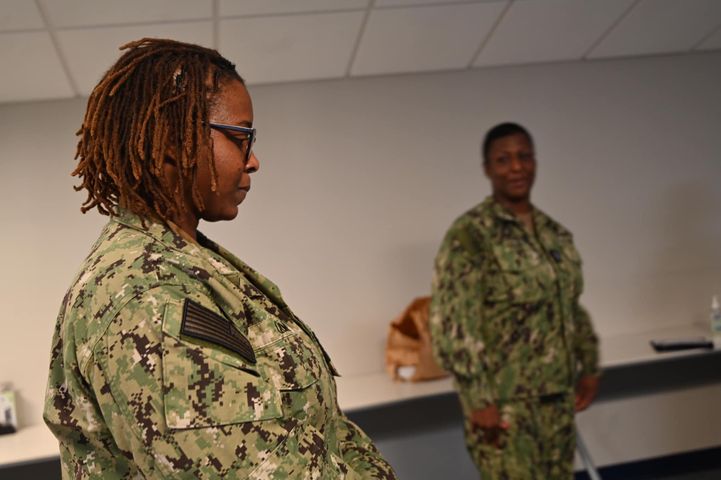 Congratulations to ITC (SCW/IW/AW) Quinn for re enlisting into the United States Navy 👏🏽 Along with a Letter of Appreciation for her beautiful wife Valentina. Thank you both for all you guys do! Presented by CWO3 Odom

A big round of applause for The PHIB’s latest awardees!

ACB2 is on a roll with the awards! Great sailors getting Great Recognition. Outstanding work everyone 🤩 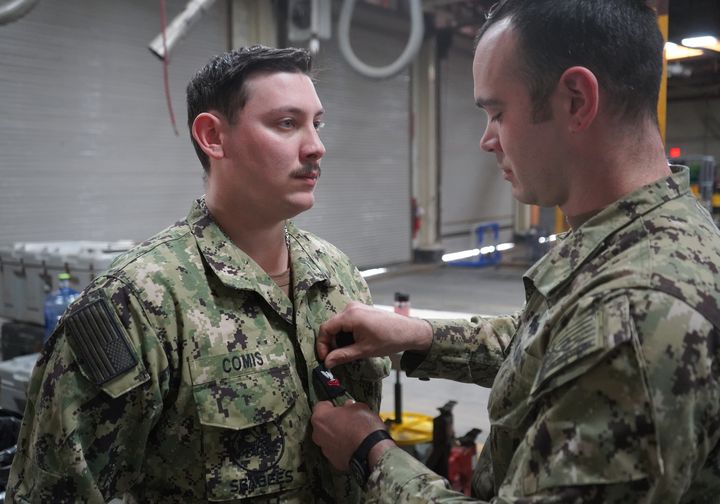 Watch Out Everyone!! Headquarters called out Bravo to an Ultimate Football Match!! Who Is Next? 🏈🏅 Congratulations to EA2 (SCW) Powell and CE2 (SCW) Tang on choosing to re-enlist into the Navy today! They are both extremely hard workers of Charlie Co. and invaluable to ACB2. BRAVO ZULU!

Congratulations to BM1 Jones for getting pinned Craftmaster! 👏🏽

Last Friday was a little chilly but we had a phenomenal Captain’s Cup! All companies were full of spirits and highly competitive! Congratulations to Bravo 2 for coming out on top! We ended the fun with a Pie Smashing. Thank you to everyone who participated and enjoy a glimpse from that day 💪🏽

Chilly Command Quarters this morning but nevertheless plenty of superstars getting great recognition! 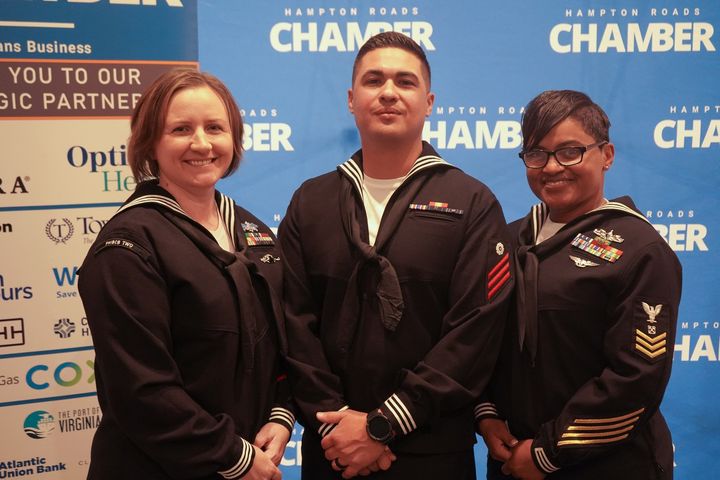 It was a pleasure seeing BM1 Lee, BU3 Klepac, and ENFN Hugo at the Marriott due to their honorable nomination as Military Citizens of the Year! Thanks Hampton Roads Chamber for hosting our outstanding sailors. We appreciate your kind words Mayor Shannon Glover.

MWR $5 ALL YOU CAN EAT Bake Off was so delicious. Stay tuned because this Thursday the votes will be tallied up and the winners will have all the bragging rights!

Together we wished BMC Baldwin a farewell and following seas as he exited the Phib to continue on in his career.

**ATTENTION EVERYONE** HAPPY VETERANS DAY!! Please submit any photos you have from your service at ACB2 during any years between 1943 to current to be added to the official digital cruise book for DECOM before next Friday 18NOV22. Thank you all for your service.

Today, we bid farewell and following seas to HM2 Kemper!

Alpha Co. Supporting LOADEX evolution to get a great amount of CESE onto LCU and a LSSV over to the rails. 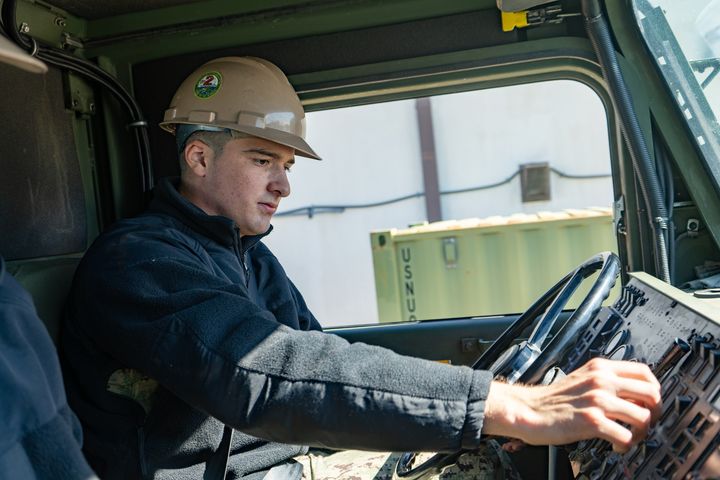 Lets go Alpha Company! Seabees putting in the work getting vehicles exact weights and making preparations for logistics coming up.

Today We Present to You THREE New Chiefs to the Phib!!!! What an achievement from these great sailors. Congratulations to EOC Mueller, ITC Quinn, and UTC Braxton. ⚓️🐐🐐🐐

On watch 24/7 for 247 Years! ACB2 celebrates the Birthday of the Navy today with a cake sharing ceremony. Slices cut by ET1 Slavik and HM3 Wright.

Special thank you to our Armory for educating sailors how to properly handle weapons and all the assistance on range as we qualified many on the M4 rifle!

Give it up for RS1 Thomas. ACB2's 2021 Sailor of the Year, everyones favorite barber, and the The First Class Petty Officer Associations President. He dedicated some more years to continue to support us all with his active duty service! 📜🖊

Today marks the start of our weapons offload, as we prepare for decommissioning!

Bravo Zulu to PS2 Hammond on your decision to stay Navy!

Please join us in congratulating our newest Chief selects!

Another day at work! ⚓️

Bravo Company conducts LOLO (Load On Load Off) operations with many new faces.

Sailors come from all over the world but we all have one thing in common and friday EO2 Burkett renewed his oath to defend the constitution. Congratulations on your reenlistment brother! 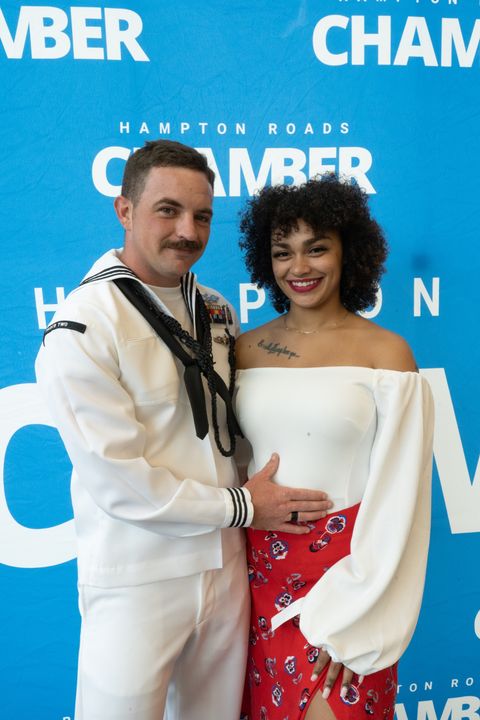 Only 25% of Adults in America are eligible to join the armed forces, of those less than 1% serve a single contract. Today several of these sailors were recognized for their significant contributions to the command. Please take a moment to congratulate them on a job well done!

Bravo Zulu to our honorees!

Our Gatorbee’s spent the day at the range, working on their M9/M4 qualifications!

Disaster Relieve Team (DRT) ONE worked with BMU2 and ACU2 on a LOADEX. Increasing their training and efficiency for mission readiness.

Congratulations to all the awardees from today’s Command Quarters!

Please join us in congratulating our Gatorbee’s selected for advancement!

Alfa’s Crane Crew working with Bravo Company to load RRDF Side Connectors onto a Combination Module for upcoming operations this summer!

Be the first to know and let us send you an email when Amphibious Construction Battalion TWO posts news and promotions. Your email address will not be used for any other purpose, and you can unsubscribe at any time. 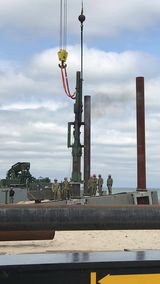 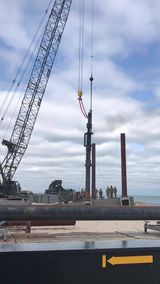 This is Our Story

Amphibious Construction Battalion TWO (PHIBCB TWO) traces its roots to the pontoon operation battalions of World War II that participated in every major amphibious assault, beginning with the invasion of Sicily. By the use of p0ntoon causeways, barge-mounted cranes and pontoon ferries, these battalions gave the amphibious forces the ability to quickly off-load the large quantities of troops and cargo needed to assure victory. Since its commissioning as the 105th Naval Construction Battalion (NCB) on July 14, 1943, under the operational control of Commander, Amphibious Training Command, U.S. Atlantic Fleet, the command has continually participated in major amphibious operations and exercises. In 1950, the 105h NCB became a component command of the recently established Naval Beach Group TWO and was re-designated to Amphibious Construction Battalion TWO. Between December 1972 and 1975, PHIBCB TWO was a component of Naval Inshore Warfare Command following the decommissioning of Naval Beach Group TWO. However, PHIBCB TWO once again became a component of Naval Beach Group TWO when it was re-commissioned in 1975. PHIBCB TWO has distinguished itself in a myriad of operations since War World II, including the 1958 crisis in Lebanon, the Multi-National Peace keeping Force in Lebanon from August 1982, to February 1984, the October 1983 rescue of American citizens in Grenada, Operation SHARP EDGE in Liberia in 1991, Operations DESERT SHIELD and DESERT STORM in 1992, Operation UPHOLD DEMOCRACY in Haiti in 1994, disaster recovery efforts for TWA Flight 800 and Egypt Air Flight 990, Hrricane Katrina, Operation IRAQI FREEDOM and Operation UNIFIED RESPONSE, and more recently with Hurricane Irma and Maria relief efforts to devastated areas of Puerto Rico, Virgin Islands and Key West.

Other Military Bases in Virginia Beach

YN1 Rose Conyers.
79-82.......
Where do you sport you [email protected] patch! we used to wear it on our right arm
Looking to get decals for my husband - can anyone direct me to the right site?
While I was checking out ACB2 page looking for old ELCAS (with Jack System) Photos, I think I recognized your CO. Is she the same Heather Walton that was assigned to ACB2 ELCAS 1987 88 89 ????? If she is I am Very Impressed. Congrats I retired as an EO1 2002
Happy Father's Day Seabees!
-SW3 Bryan Wickham (2005-2010)
Are any of the unit Chiefs on here? Can you PM me?
Does ACB-2 have a Challenge coin. Thank you EO1 Retired. ACB-2 was my first Command 1986 -88
So as I was gathering up all of my stuff to finally build my shadow box I realized that of all my coins I do not have one from the phib where I spent 5 years at. I have looked online and can find coins for most every other battalion but nothing for the phib. Are there any out there?
Bm1 Allen was in C co with Big tom went to the med in 1973
Can I post some pictures on this site of when I was stationed at Littlecreek, ACB2 in 1966 & 67?
my name is iBm1 Joseph Allen retired i worked on the water front in 1973 i was a 3rd class Bm working with Big Tom a 1st class Bm we went to the Med that year living in Miami now
x

Other Military Bases in Virginia Beach (show all)