Message for Hunter Biden: There's still time for you to get ahead of what's coming.

Hunter Biden is now on notice: My colleagues on the House Judiciary Committee and I have officially warned him not to delete or destroy any evidence of coordination and collusion in the coverup of his laptop scandal.

Despite the President’s empty promise at his State of the Union address to secure the border, Biden’s crisis will only continue.

From day one, this Administration has demoralized our border patrol, and allowed unprecedented human trafficking and fentanyl supply to enter our country.

I was proud to stand alongside Leader Kevin McCarthy and my colleagues yesterday to make sure we hold this White House accountable.

➡️ TOMORROW - APRIL 5TH ⬅️ I will be hosting a free webinar with Medicare experts to answer your questions about Medicare Parts A, B, C, D and Medicare Advantage.

Just when you think Biden can’t make his border crisis any worse — he makes it worse.

Our Border Patrol friends tell us they’re overwhelmed as never before and the White House wants it that way.

Secret Service is reportedly paying $30,000 a month to rent a Malibu mansion to keep watch on Hunter Biden.

Looks like the cost of protecting Hunter is being shared by Big Tech, the mainstream media … and now the taxpayers as well.

➡️ TOMORROW - APRIL 5TH ⬅️ I will be hosting a free webinar with Medicare experts to answer your questions about Medicare Parts A, B, C, D and Medicare Advantage.

We won’t stop until the American people know the truth about the censorship of the Hunter Biden laptop and the Big Tech/Mainstream Media cover up of Biden Family scandals.

No one is buying that America’s energy crisis is anyone’s fault except Joe Biden.

Hillary’s 2016 campaign was fined by the FCC for lying about the Steele Dossier.

Not sure the mainstream media wanted you to know.

I stand with Justice Clarence Thomas.

➡️ APRIL 5th ⬅️ I will be hosting a free webinar with Medicare experts to answer your questions about Medicare Parts A, B, C, D and Medicare Advantage.

Today is Vietnam Veterans Day. We owe these men and women – more than nine million strong – a debt beyond words and gratitude beyond measure.

Every year on this day, we honor those who answered our country's call and set records for courage and commitment. Thank you, veterans.

Hunter Biden is now on notice: Do not delete or destroy any evidence of your coordination and collusion to prevent accurate reporting of your laptop from being seen by the American people.

Nobody is buying the White House spin that Biden didn’t go off the rails when they let him speak before a live audience.

Biden’s bystander routine looks just as bad overseas as it does at home.

I have now put Mark Zuckerberg and Meta on notice: Don’t delete or destroy any evidence of your coordination and collusion in the Hunter Biden laptop scandal.

Today, I put this White House — including Jen Psaki and Ron Klain — on notice: Don’t delete or destroy any evidence of your coordination and collusion in the Hunter Biden laptop scandal.

Facebook is now on notice; Don’t delete or destroy any evidence of your coordination and collusion in the Hunter Biden laptop scandal.

We are sending our first document preservation notices in getting to the bottom of the Hunter Biden/Big Tech/Mainstream Media scandal and coverup.

We don't have anything close to all the dirty details about the Biden Administration's new and even worse Iran nuclear deal.

You better believe I'll be fighting to stop this in Congress.

On day one, President Biden declared war on American energy independence. The highest-ever gas prices that have followed is the direct result.

I’m proud to join my friend Rep. Schweikert in this urgent letter to the White House.

I’m calling for a Congressional investigation into how big tech, mainstream media, and the Democrat industrial complex colluded to suppress the Hunter Biden scandals — and during the last days of the 2020 election.

Interested in learning more about the legislative process, media communications, and how Congress works?

My office is looking for spring and summer interns to work in my D.C. and Southern California offices. For more information, visit the link below:

For months, the Biden Administration has been crafting another nuclear deal with Iran.

But we’re not meeting with the Mullahs face to face. The broker for the two sides has been — and I’m not making this up — Russia.

On March 10 at 1 PM PT, I will be hosting a free webinar with Internal Revenue Service experts so we can answer your questions about the tax filing process and upcoming deadlines.

Just one week away - make sure to sign up here!

HAPPENING NOW: I will be hosting a free webinar with IRS experts to answer your questions about the tax filing process and upcoming deadlines.

Fact: Gas prices have risen month over month throughout the entire Biden presidency.

MARCH 10th I will be hosting a free webinar with IRS experts to answer your questions about the tax filing process and upcoming deadlines.

Enough shielding of criminal illegals from the law. Gavin Newsom needs to answer for this.

David Mora killed his three daughters and a chaperone for his visitation, before turning the gun on himself, authorities say.

On March 10 at 1 PM PT, I will be hosting a free webinar with Internal Revenue Service experts so we can answer your questions about the tax filing process and upcoming deadlines.

Just one week away - make sure to sign up here!

You better believe I’m concerned President Biden isn’t up to this.

Putin will use force if he doesn’t get what he wants by diplomacy: Issa

Because of President Biden’s unsteady leadership, America is being tested in every corner of the world.

It’s a test we are currently failing.


California Republican urges Biden to be ‘independent’ in making foreign policy decisions on ‘The Evening Edit.’

IN 15 MINUTES: I will be hosting a free webinar with U.S. Dept. of Education experts so we can answer your questions about the FAFSA application, and the student benefits the program offers.

Be the first to know and let us send you an email when Congressman Darrell Issa posts news and promotions. Your email address will not be used for any other purpose, and you can unsubscribe at any time.

The People’s House must be squarely on the side of the Parents of America. 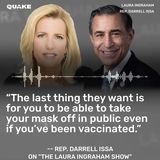 Darrell Issa on Mask Mandates for the Vaccinated

Darrell Issa on the Deadly Car Crash at the Border

Darrell Issa Supporting the Continuation of the Mexico City Policy.

I Support the National Right to Work Act

Every day, our military is ready to fight for us. Now we have to fight for them. The Biden military vaccine mandate will devastate our fighting force and could throw tens of thousands of soldiers, sailors, airmen and Marines out of the service. Mr. President: End your mandate.
The Biden vaccine mandate is set to destroy the careers of 50,000 active-duty military. It’s time to fight for those who always fight for us. We can stop this. https://www.foxnews.com/opinion/biden-vaccine-mandate-decimate-military-rep-darrell-issa
For months, my staff and I worked to help an American citizen escape Afghanistan after the Biden Administration abandoned him there. Last night, Prince Wafa and I both joined Kennedy. https://video.foxbusiness.com/v/6285877193001
Bob Dole will always be remembered as one of the most capable and consequential members in the history of the U.S. Senate. But much more than that he was an American original: A boy of the heartlands and man of the Kansan Plains, he went to war, went to Washington and, by his valor and values, left his mark on the world as a member of our greatest generation. A combat veteran and wounded warrior, he knew the hard way and a hard life, but his heart and mind and spirit were generous, thoughtful and razor-sharp. He was the first presidential candidate I supported as a delegate, and while others achieved a better campaign result, I never supported a better man. His life was ultimately a life of civic service: To his country, to his community, to his fellow veterans and his fellow Americans.
Unconstitutional mask, vaccine, and testing mandates for Americans. Absolutely nothing for illegal migrants pouring across our southern border. Biden’s America.
Turkey ⬆️ 23% Pumpkin pie ⬆️ 17% Potatoes ⬆️ 13% Carrots ⬆️ 47% But don’t worry, the White House claims you saved 16 cents on the 4th of July.
“Government’s first duty is to protect the people, not run their lives” - Pres Ronald Reagan
Every day, the voices of parents are being silenced, and they are either ignored or prevented from stating their legitimate concerns about their own children. That ends now. issa.house.gov/media/press-re…
Honored to make the case in the Senate today for my legislation — that already overwhelmingly passed the House — to authorize the transfer of land acquired by the Pala Band to benefit the tribe, its members, and the surrounding community. We will preserve this acreage forever.
I was proud to join Maria Elvira Salazar and my House and Senate colleagues today to stand with the people of Cuba in their continuing fight for the freedoms we Americans enjoy every day. 🇨🇺 🇺🇸 #CubaLibre
Interns make up a vital part of so many Congressional offices, and we’ve been so fortunate to have truly outstanding men and women work alongside our staff – and many have become permanent members of our team. Experiencing the policy process in person and learning how our government works are unique opportunities for any Capitol Hill intern. I encourage individuals who are interested in a spring internship in my office to visit my website below. https://issa.house.gov/services/internships
Financial privacy is a fundamental freedom held by every American. But the Biden Administration is trying to take away your rights and let the IRS spy on your bank account. That’s why I convened this meeting with community bank owners, CPAs, local businesses leaders and local credit unions to discuss this invasion of privacy and how we are going to fight back and stop it.