This is the official page for The Army Cyber Directorate at the Pentagon.

As many of you have probably read in the news recently the Army has stood up a Cyber Directorate at the Pentagon. The Cyber Directorate will comprise of not only cyberspace operations, but also electronic warfare and information operations. The directorate is under the direction of BG (P) Patricia Frost.

Please note that after today the HQ, Department of the Army, Electronic Warfare Office page will no longer exist.
Our page will soon evolve into a new page that will represent the Army's Cyber Directorate.

Thank you all for your continued interest in Army electronic warfare and we hope to continue to engage you on our new Army Cyber Directorate page after the launch.

"We have seen the combination of unmanned aerial systems and defensive cyber and advanced electronic warfare capabilities and how they provide Russian forces a new degree of sophistication.”

Secretary of the Army, Eric Fanning Both electronic warfare and cyber operations are a primary focus area for the newly formed Army Rapid Capabilities Office.

"This office will address capability gaps that we're seeing in real time, right now from our commanders in the field."

WASHINGTON -- The Army has created a Rapid Capabilities Office to expedite critical technologies to the field in an effort to counter urgent and emerging threats. The new office will conduct rapid materiel development and delivery efforts to address ...

"The U.S. Army isn't alone in the world in its drive to perfect operations across domains."

WASHINGTON (Army News Service) -- The U.S. Army is considered the world's premier land force, but it has the potential to play a greater role in shaping other domains like sea, air, cyber and space.

From cyberwarfare to drones, the future of conflict is electronic

From cyberwarfare to drones, the future of conflict is electronic

More than 10 years fighting in Iraq and Afghanistan have radically reshaped our armed forces, and technology like drones, sensors and even more advanced fighter jets will make the next 10 years full of even more surprises.

“China is improving information and operational security to protect its own information infrastructure, and is also developing Electronic Warfare (EW) and other information warfare (IW) capabilities, including denial and deception.”

The U.S. and South Korea demonstrated an interoperable spectrum management capability at a distinguished visitors’ day in July.

Making cyber operations and electronic warfare a seamless part of military operation has been a main focus of the Army and other military services for several years.

A pilot program embeds cyber teams into a brigade's companies, conducting defensive and offensive operations while on the move. The military is quietly testing new electronic warfare systems that use artificial intelligence to adapt its tactics to the enemy.

“Our adversaries in conflicts around the world have proven the information environment is here, and it has measurable impact in conflicts."

The military is experimenting with drones, censors and new tactics designed to defeat digital enemies on tomorrow's battlefields. 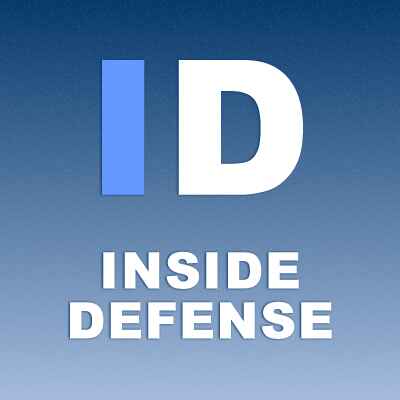 "The Cyber Directorate includes electronic warfare personnel who participate in the staffing, reviewing and identifying capabilities required for both ground and air Multi-Function Electronic Warfare systems."

The Army is reaching out to industry to improve its electronic warfare capabilities, according to a request for information posted Aug. 12 on the Federal Business Opportunities website.

SecArmy lays out priorities at his first town hall

Secretary of the Army Eric Fanning lists electronic warfare a top priority during his first town hall style meeting at the Pentagon.

Reflecting on his most recent trip to the Pacific, which included a stop in Malaysia, Secretary of the Army Eric K. Fanning said he was impressed there by the interaction he saw between U.S. Soldiers and Malaysian forces, who are now participating in...

"For years, it has been clear that certain countries could, and most likely would, develop the technology and expertise to use cyber and electronic warfare against U.S. forces."

The Defense Science Board
Study on autonomy

The Defense Science Board released the results of its summer study on autonomy. The document provides a raft of recommendations for DoD in the way of further adopting autonomy into systems and operations while ensuring sufficient security against adv

A recent training exercise at the Fort Irwin National Training Center allowed Soldiers to gain experience with offensive and defensive cyber operations as well as electronic warfare and information operations.

An expeditionary cyber pilot, known as Cyber Support to Corps and Below, or CSCB, is providing maneuver commanders an improved situational awareness of the information environment and tools to shape that environment, said Lt. Col. Jon Burnett.

The latest exercise focused on integrating cyber and electromagnetic tools and techniques to improve a commander's situational awareness.

The Army is looking at critical technologies in the cyber and electromagnetic activity space, or CEMA.

“At the Army Materiel Command we’re committed to fostering a culture of innovation.”
Gen. Dennis Via
AMC Commander

NDIA is not responsible for screening, policing, editing, or monitoring your or another user's postings and encourages all of its users to use reasonable discretion and caution in evaluating or reviewing any posting. Moreover, and except as provided below with respect to NDIA's right and ability to…

"We need to be aware that we are very likely going to fight an adversary that is converging using [cyber and electromagnetic activity] integration, ISR and fires across full spectrum conflict."

The decision to disband electronic warfare division, which will fold into a newly established cyber directorate at the Pentagon within the Army, reflects a bigger strategy.

This is the future of war

As one Army officer said during a 2015 training exercise, "future fights aren't going to be guns and bullets. They're going to be ones and zeroes."

Let us know what you think!

LTG Edward Cardon, commander of U.S. Army Cyber Command and Second Army and BG Patricia Frost, the chief of the Army's Cyber Directorate at the Pentagon both attended the exercise.

The 1st Armored Brigade Combat Team, 1st Infantry Division is wrapping up a decisive action training rotation at the National Training Center at Fort Irwin, Calif. Army cyber forces were there to support the brigade in the cyberspace domain, bringing...

With a bevy of devices for soldiers to keep track of, CERDEC creates a tool that could eliminate the manual method of making sure certificates are ready to authenticate users.

Are Russia's military advances a problem for Nato? - BBC News

"We have not had to worry about being jammed or being intercepted, that sort of thing."

What does the performance of Russian forces in Ukraine say about the country's potential military capability against the Atlantic Alliance?

“Units continue to struggle with the ability to maintain their network in the box. Sometimes that’s a result of the world-class cyber [opposing forces’] actions; many times

Army joins cyber and EW conversation with an emphasis on innovation

ABERDEEN PROVING GROUND, Md. (Aug. 9, 2016) -- Failure to change in the cyberspace is a decision to fail.That was the message from Maj. Gen. Stephen Fogarty, commanding general, U.S. Army Cyber Center of Excellence, during the opening remarks at the ...

“We are focusing on CEMA [cyber electromagnetic activity], we are integrating S&T within the systems-of-systems. That then allows us to be operationally relevant."

More than 60 school officials and teachers from the New Jersey School Boards Association participated in a professional development day hosted by the U.S. Army at Joint Base Mcguire-Dix-Lakehurst July 15. “We’ve got to change the way we’re thinking….An adversary can see us just as we see them. If you can be seen, you will be attacked.”

WASHINGTON: Marines, turn off your iPhone and dig yourself a foxhole. That’s the Commandant’s message to young Marines, based on embarrassing experiences in recent exercises. As cheap drones and other surveillance technologies spread worldwide, said Gen. Robert Neller, US forces must re-learn how to...

How the US Army Is Getting Ready for the Unthinkable: War with Russia or China

“We’re developing systems to be prepared for the full range of potential conflict.”

Cyber Protection Brigade overcoming obstacles, but has 'a long way to go'

Cyber Protection Brigade overcoming obstacles, but has 'a long way to go'

Military officials outlined some of the challenges involved in building the cyber force and integrating teams with CPB at TechNet Augusta.

"The electronic warfare technology demonstrated by the Russians in Ukraine is the best in the world, far better than ours."

The performance of Russian artillery in Ukraine shows that Moscow has a technological jump on us. 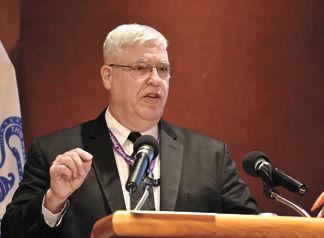 “We all have roles in OPSEC. It doesn’t belong to any one organization or to the Army’s new Cyber Directorate or Army OPSEC. It’s a responsibility we all have to shoulder.”

Operations security is not a lone wolf enterprise.

“We’re learning an awful lot from the environment in Ukraine, both the capabilities we’ve seen the Russians display in Crimea — electronic warfare capability at a tactical level that we absolutely don’t have.”

Here are 4 takeaways from the opening day of TechNet.

"There has to be boots on the ground. So not matter what approach you take to a conflict, at some point you have to have a presence."

NDIA is not responsible for screening, policing, editing, or monitoring your or another user's postings and encourages all of its users to use reasonable discretion and caution in evaluating or reviewing any posting. Moreover, and except as provided below with respect to NDIA's right and ability to…

Be the first to know and let us send you an email when HQ, Department of the Army, Electronic Warfare Office posts news and promotions. Your email address will not be used for any other purpose, and you can unsubscribe at any time. 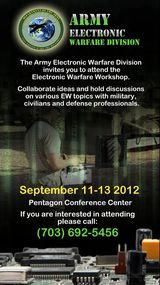 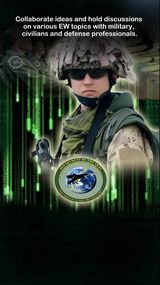 Dear Dept of the Army , Electronic Warefare Office, I respectfully seek advice concerning this matter I face in every residence I move to which has even been noticed by others in 2 other residences. https://www.youtube.com/watch?v=Za-JS2oDmXE In the past I recieved threatening letters from a Youtube user that that stated he was using a Ultrasonic weapons towards my residence. At that time I had documented serious damage to my vehicles , harassment in all areas of my life some which came from a group called Citizens Corps. I have left over 8 schools since 2006 due to harassment and a few jobs and I am considering seeking asylum through another government in the near future if I am unable to prevent the attacks on my life. The sound penetrates everything and causes a vibration sound that makes the ear rings. I takes about 3 to 4 days to recover from the ringing sound then it goes away. Its not tinnititis. My last neighbhor said the sound was so powerful they had to sleep with fan on high during the winter along with ear plugs. I currently have right side hearing loss and at one point had to sleep in a bathtub. My information has been shared with accoustical engineers and one stated its infrasoinic other have said ultrasonic. One thing is for sure I have been systemtically attacked. I apperciate any advice on what equipment that I should use to check the spectrum. If you have any defense contractors that have the qualifications to check for Infrasonic and Ultrasonic waves and can pin point the user of the device it would be apperciate. Vents and fans high along with meters are not capable of producing ultrasound at the current power it is at now. Respectfully Submitted, Robert Rivera