Girl Child Network Zimbabwe is the first organisation in the world to design the Girl Empowerment Model that churned out women leaders. Empowering girls

The theme for International Women' Day 2022, is "Gender equality today for a sustainable tomorrow "

a gender equal world
world free of bias ,stereotypes and discrimination
world where difference is valued and celebrated
we can forge women's equality
we can all THE BIAS

Happy International Women's Day to all the incredible women. We celebrate you

When girls r taking up football as a career , who knows tmw they will b our MIGHTY WARRIORS , support them #

We are very much delighted to see our younger sisters taking up football as a career and with more support , these young girls are destined for greater heights. These girls are dedicated , passionate and determined lot.There is a lot of potential in them and its good to make sure that the girl child continues to get the much needed recognition .Donate towards this cause

Shout out to our girls 'THE FIRE QUEENS'. These girls are doing their level best to be the best football players. They need our support. We encourage them to boldly take up the gauntlet, look ahead and focus on their chosen goal.

On the 19th of December 2020 , we had an early christmas party at Chitsotso village in Rusape .As a way of celebrating one of our benefactors' birthday "Ella Muzvare" she donated pads , perfumes and pants as christmas gifts to the less privledged girls in Chitsotso. In 2021 , we are looking forward to give them food hampers .....May the good Lord keep on blessing our benefactors ,the community at large, girls and young women out there , lastly our followers , members of this group , without your support there wouldn't be Girl Child Network .Stay Blessed.

We may not be able to change the whole world but we can make a difference in OUR world- in the community which we live .

Thank you dear colleagues for liking this page . We appreciate you. God bless you abundantly .

After donations have been made ,the pads are going to be distributed at our Home centres,Chitsotso, Mwemba and Chitungwiza We appeal to well wishers to open up their hearts and support the pad campaign by donating money or pads . Well wishers can get in touch with us on ; [email protected]
whatsapp +263777867777
Bank details are :
ZWL 1037918365
FCA 104700113

Thank you for supporting our girls .Be blessed.

Support a girl in need...

Support a girl and young women in need ...Girl Child Network is running a donation campaign ,'Donate a pad# Make her feel comfortable# .As an organisation ,we are inviting all well wishers to join the campaign by donating money towards purchasing sanitary wear for underprivileged girls and young women. A $ will go along way .Little is much when it comes from the heart . Well wishers can get in touch with us: [email protected]
+263 777 867 777
Girl Child Network Zimbabwe Chapter
Our Bank details
ZWL 1037918365
Nostro 1047500113 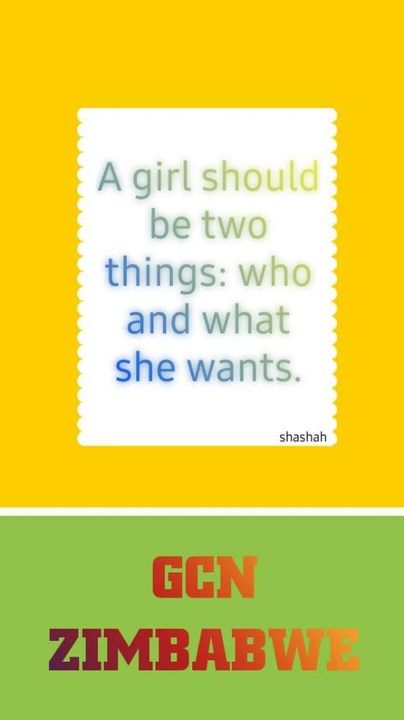 The world needs strong women. Women who will lift and build others, not to criticize or look down upon each other. We must be women of indomitable will. Catch them young and watch them grow, to those who want to join our Girls empowerment club feel free to inbox us.

We cannot all succeed when half of us are held back. We call upon our sisters around the world to be brave, to embrace the strength within themselves and realize their full potential. sky is the limit#

To those who want to join our Girls empowerment club, please feel free to drop your number.

It's not just love I have for this bag , but inspiration that is brought about by the creativity, aesthetics and art that lies in this piece of work. One of our girls(Gamu) made this bag from papers of sweets and chips, if supported she can come up with more beautiful craftworks. Let's support our girl and show some love # the girl child the sky is the limit #

It's so sad to notice that as we are trying to save our lives by staying home and be safe from the Covid 19 pandemic some girls and women are not safe at all. Cases of abuse are trending day by day. Let us stand up for the vulnerable girls and women out there who are being abused and voice for the voiceless. Let us save lives of the girl child and promote women empowerment.

.. .. In Mudzimbasekwa village , Nhakiwa ward 14, Uzumba , UMP there is a girl named *Vimbai* *Mhlanga* aged 12, currently doing grade 7 at Machekera primary school. She stays with her grandmother, her mother has since re-married & her father is late. She was r***d as from the period when she was in grade 2 & this only came to light when she was in grade 6 last year in 2017.After,numerous efforts by teachers at Machekera primary school to establish the status - quo of Vimbai with regards to her health, mental wellness, it was only realized that the girl was being abused by her uncle named Tinei Mhlanga, her biological father's young brother , dating back to the period she was doing grade 2 to the time of reporting. The case was reported to the ZRP then, however the perpetrator was sentenced to 20 years behind bars in October 2017 at Mtawatawa Magistrates court .He is currently serving the sentence.

Vimbai is on TB treatment currently.

The child is no longer going to school because of sickness. She has failed to attend school this term. The girl is bed ridden now.She cannot do anything on her own because of her spine

She went to Mtawatawa district for treatment, but was referred to Nyadire Mission hospital for an x-ray of the vertebrae column & the chest.

However, the Dr said that her backbone needs an *urgent* operation from a specialist at Parirenyatwa Group of Hospital. The Dr insisted that Vimbai has to undergo surgery as a matter of *URGENCY* , for her condition to be corrected.

The school authorities raised $140 for her to visit Mutawatawa & Nyadire hospitals respectively. The school has been in the habit of providing food for her though in-house
donations.

Vimbai is in dire need of assistance in the form of food, medication & accommodation as well. Her grandmother has been ill - treating her of late because of the incarceration of Tinei Mhlanga, her uncle, who happens to be granny's child.

Please assist Vimbai since the Dr said if the operation is delayed, she might be crippled for the rest of her life.

JUST THOUGHT MAYBE SINCE THIS GROUP IS COMPOSED OF PEOPLE OF DIVERSE BACKGROUNDS, CAREERS WE MIGHT PUT A DIFFERENCE IN THIS GIRL'S LIFE ASAP !!

Girl Child Network Zimbabwe officially announces that Powerhouse International Ministries will be in Zimbabwe on their mission but also chosen to visit Girl Child Network Zimbabwe to conduct a Girls and Women Empowerment Workshop.
Powerful mentors and business certified coaches Ms Taiwo Adesina and twin sister Kehinde Adesina and Seyi Adesina will meet some of the most disadvantaged women and girls to empower them with skills for leadership and business and to instil power to transform

The workshop will be held at

Women and girls in surrounding areas are welcome

There are two harmful cultural practices committed against this young woman.First she was forced to marry at age 16. Second she is a widow held as a slave by late husband's family.

This girl was aged 16 when she was married.At age 17 dhe was widowed. At age 18 a traditional chief in Mberengwa Masvingo has charged her with having s*x before one year.Her punishment is worse than the dead man who r***d her as a child. She cant be freed from previous marriage though the man is dead.

Zimbabwe needs a Child Protection system as a matter of urgency. The number of young girls forced to marry and living as s*x slaves is worrying.

And traditional chiefs are in place to arrest and harass girls who are forced to marry. System put ruthless chiefs to enforce child marriages.

(Also, visit our page to find out more about our diamond ring giveaway)

Harare, Zimbabwe(News of the South) – Cases of young school drop-outs girls engaging into prostitution has gone up in Epworth, an increase Springs of life Zimbabwe said might be a reflection of parents’ failure to pay school fees for their children.

Mercy visited us at Girls Empowerment Village.She inspired us. Proud members of a World’s Children’s Prize Child Rights Club in Zimbabwe get ready for important tasks on Global Vote Day in their school. Well done – you are tomorrow’s leaders and changemakers!

Get the whole picture - and other photos from Mduduzi Mathuthu

Be the first to know and let us send you an email when Girl Child Network Zimbabwe Chapter posts news and promotions. Your email address will not be used for any other purpose, and you can unsubscribe at any time.

Other Public & Government Services in Harare

from BERHANE SELASSIE in ZIMBABWE
how are you all ,, can your help me how to report a case of child abuse or women abuse please help they someone in risk now
x

Other Public & Government Services in Harare (show all)