Science and technology department promotes science education, research and science communication for the benefits of the students, academicians and researchers and welfare of the society through various programs and activities.

#Odisha is well known for its rich biodiversity and wide variety of flora & fauna. On #WorldWildlifeDay, let's reiterate commitment to protect them and strengthen the conservation measures so that our wildlife can flourish and continue to be a matter of pride for us.

On #NationalScienceDay, remembering Dr CV Raman’s discovery of #RamanEffect for which he was awarded the Noble Prize. On this day, let’s also pay tribute to all great scientists whose path-breaking achievements have led #India towards progress.

As part of the ongoing #NationalScienceWeekFestival, a drama competition has been organised at Regional Science Centre, Bhubaneswar. The event was inaugurated by the Chief Guest & President of #Odisha Bigyan Academy, Shri Bibhuti Bhusan Mishra, and was attended by other dignitaries.

During the event, three different plays were performed with an aim to spread awareness on #COVID19, the importance of environment preservation, and organ donation, which were highly praised by all.

To provide students a chance to showcase their talents in the ongoing National Science Week Festival, a series of competitions will be conducted for UG, PG/doctoral students on Feb 25. Interested candidates can register themselves at http://cutt.ly/SWF2022.

On International Day of Women & Girls in Science, let’s honour the outstanding young minds who are bringing in a new definition in the field of science & technology in #India. Let’s encourage our future #WomenInScience to achieve excellence & contribute to India's progress.

While we spend a lot of time on the #Internet, our vulnerability to cyber attacks increases. Thus, safeguarding our online presence is a necessity. On #SaferInternetDay, let’s reaffirm commitment to be more responsible and follow safety protocols while using the internet.

Remembering the symbol of peace & non-violence, the Father of the Nation, Mahatma Gandhi on #MartyrsDay. His message of peace and non-violence along with his loyalty and love for the country continues to inspire generations.

Many organisations, individuals across the globe are vulnerable to cyber attacks due to inadequate data security measures. On #DataPrivacyDay, we must work towards sensitising and disseminating best privacy practices & principles.

Wishing all the citizens of our Nation a very Happy 73rd #RepublicDay. As responsible citizens, let’s be an integral part of country's progress and honour this day with the ethos of our Constitution and pledge to stand by them. #HappyRepublicDay

Remembering the greatest patriot #NetajiSubhasChandraBose on his birth anniversary. One of the most formidable leaders of our freedom struggle, his commitment towards the Nation will always be an inspiration for generations to come. #ParakramDivas

On #ArmyDay, salute the bravery, courage & commitment of the #IndianArmy jawans for their sacrifice and selfless service to safeguard our country. It is because of these bravehearts that #India is a much safer place today.

BLUIS is a web and mobile based system to keep track of unauthorised development on Govt lands. It uses space tech and #AI for safeguarding Govt lands and planned development, making #Odisha a pioneer in this field.

This #NewYear, may we all witness progressive changes in our lives by leveraging scientific innovations, their countless applications and be showered with blessings, happiness and good luck. #HappyNewYear2022

May the good times and treasure of the present become the golden memories of tomorrow for you and your family. Wishing each of you lots of love, joy, happiness and prosperity. #MerryChristmas!

With an aim to link the researchers to various resources available across the country, Indian Science Technology and Engineering Facilities Map (ISTEM) has launched the State level workshop, in collaboration with the Dept and Bhubaneswar City Knowledge Innovation Cluster at KIIT - Kalinga Institute of Industrial Technology in #Bhubaneswar.

Homage to the man who knew infinity, Srinivasa Ramanujan on his birth anniversary, celebrated as #NationalMathematicsDay. His work on number theory as well as many other branches of mathematics continues to be a guiding light for many.

‘O-Hub’, the world class start-up hub set up by #Odisha Govt will be the first point to identify best in the industry for co-creation & development of business with their new ideas. It will help start ups to gain access to domestic, global ecosystems & markets. #StartUpOdisha

The inaugurated projects include Biju Patnaik Weightlifting Hall & new sports hostel at #KalingaStadium, swimming pools in Angul & Baripada and indoor stadium in Rourkela. Apart from indoor sports, the multipurpose halls will be used as disaster shelters during crisis.

Registering an all-time record in #Odisha's employment history, State Govt has recruited 6131 school teachers at a time under the #5T framework. During the orientation programme of the teachers, CM Naveen Patnaik addressed the new appointees at Kalinga Stadium, #Bhubaneswar.

Citing that application of digital #technology in the education system is an urgent need in current situation, CM focused on the need to provide special training to teachers. CM announced that all Government and aided high schools will be transformed in phases.

#VijayDiwas marks the victory of #India over Pakistan during the 1971 War that eventually led to the liberation of #Bangladesh on December 16. On its golden jubilee, salute the invincible courage of our jawans who made supreme sacrifices to lead the Nation towards victory.

Be the first to know and let us send you an email when Science and Technology, Government of Odisha posts news and promotions. Your email address will not be used for any other purpose, and you can unsubscribe at any time.

Send a message to Science and Technology, Government of Odisha: 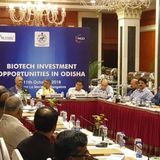 Other Government Organizations in Bhubaneswar