The Royal St. Lucia Police Force Reserves, The Royal St. Lucia Police Force, The St. Lucia Cadet Corp and The St. Lucia Martial Arts fraternity, mourn the passing of ASP Victor Dudley. His contribution to the Police Force and the Cadet Corps and the Martial Arts organization will be greatly missed.. His passion and love for all three organizations was without a doubt genuine. He will be missed immensely by all the lives he touched directly and indirectly. Rest In Paradise ASP Victor Dudley 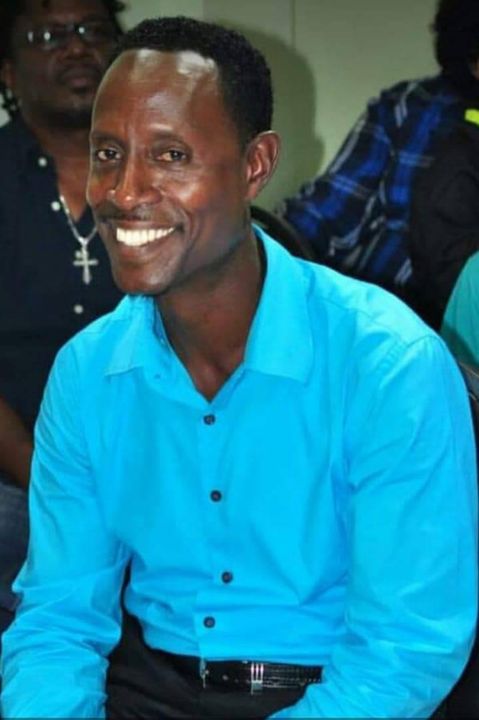 WE ARE WISHING EVERYONE A MERRY CHRISTMAS AND A BRIGHT AND PROSPEROUS NEW YEAR. FROM THE ROYAL SAINT LUCIA POLICE AND ALLIED SERVICES CO-OPERATIVE CREDIT UNION LIMITED. 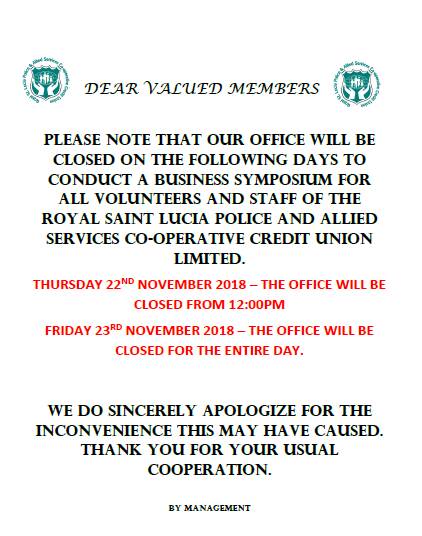 Remembrance Day Parade 2018 at the Derek Walcott Square under the baton of Director of Music Superintendent Timothy Mondesir.......

Barrels, Pkgs must ARRIVE in St.Lucia in the Concession Period as stated above . 100 % WAIVER OF ALL CUSTOMS DUTIES AND TAXES APPLICABLE TO PERSONAL ITEMS - Clothing, Shoes; GROCERIES, TOYS.

PLEASE NOTE : THE CHRISTMAS CONCESSION IS LIMITED TO TWO BARRELS PER HOUSEHOLD ( not per person, for example, two or more persons in a family will not be granted Duty Exemption individually; once the HOUSEHOLD has been Granted DUTY FREE CONCESSION on two barrels, the Concession has been exhausted by the Household). 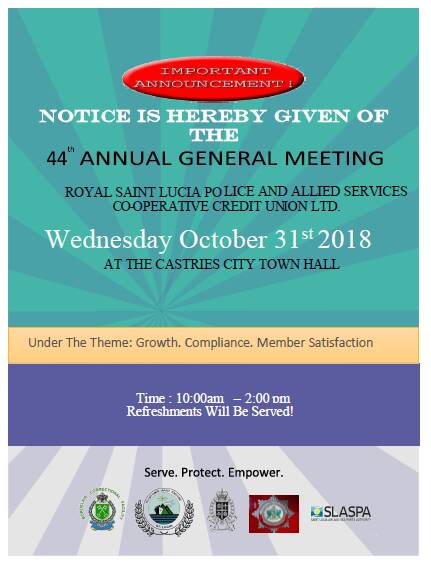 Dear Valued Members. Please take note of this important notice of Our 44th Annual General Meeting, this meeting is scheduled to take place at the Castries City Town Hall on WEDNESDAY OCTOBER 31ST 2018 @ 10AM-2PM. NOW IS THE CHANCE FOR YOUR VOICES TO BE HEARD. EVERY MEMBER HAS THE RIGHT TOO ONE VOTE.

The Immigration Department of Royal Saint Lucia Police Force would like to inform the public of a temporary inability to process local passports today, Tuesday July 10, 2018, due to technical difficulties experienced with the passport system.

The department remains able to process extensions and foreign passports.

The Royal Saint Lucia Police Force wishes to apologise for the inconvenience caused.

Cassandra "Cassie" Justin, representing the Port Police department / SLASPA is new to this competition but not new to the performing arts.

I have been a dancer with The Helen Folk Dance Group, The Christy lights Dance Academy, The miracle Dance Family & The Onyx Dance Crew.

I am also a steel pan player and have been one for 12 years where currently I and a member of The Pantime Steel orchestra and the Pantastic Muzik Steel Orchestra which I am the captain.

My song " A Friend" is up beat but also touches on everyday situations that occurs in our everyday lives when it comes to friendships.

"Fire" is actually a response to the song "No Remorse" by Miss Tick.

Representing the Vulnerable Persons Team in Castries, I am 29 year old Melissa ‘Slayer’ Hippolyte. I have been serving as a police officer from the year of 2007. Within those years, I have worked at the Central Police Station, Police Control Room and the Criminal Investigations Department. From my first year of enlistment into the organization, I have graced the Kaiso Headquarters stage with my talent. I have also represented the police at the annual Inter Commercial Competition where I placed first runner up. After a two year break, I am back to do what I love and battle for the Kaiso Headquarters Crown.

LOOK OUT FOR IT...ITS ON

The finals of the COP T20 Cup took place on Thursday January 25th, 2018 at the Daren Sammy National Stadium. Northern Division and Southern Division were the two teams all ready to capture the title. At the end of the game Southern Division would emerge the winner, capturing the title for a second year in a row.

INVITATION
An invitation from the Royal Saint Lucia Police Force has been extended to all promoters of events to a meeting on Friday January 26, 2018 at 10am in the Conference Room at Police Headquarters - Chesterfield, Bridge Street, Castries.

My guest on the first episode of Police Insight for 2018 will be Senator the Honourable Hermangild Francis , Minister for Home Affairs, Justice and National Security. Join us as we discuss many important issues such as, Mass Crowd Guidelines, IMPACS, and his plans to reduce violent crime in St Lucia. Tune in on MBC television and 91.3 real FM radio on this coming Monday from 8 30pm. 🗣tell a friend to tell a friend. 🔥🔥🔥 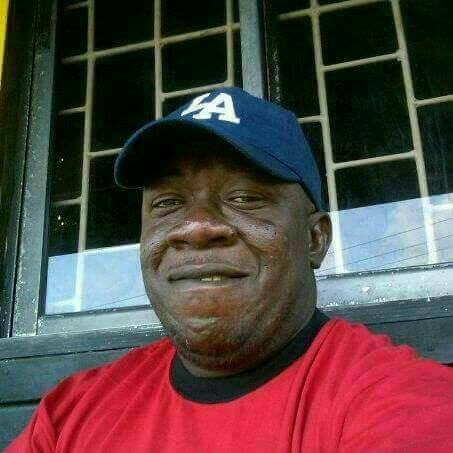 The Commissioner of Police, Executive and other ranks sympathises with the family of ex Corporal 100 Neil Stanislaus. Cpl 100 Stanislas served the organization for many years having worked at many stations and departments. May he rest in peace.

The St. Lucia Fire Service is currently experiencing communication downtime with their emergency lines, island wide. This is due to issues currently being experienced by the service provider and beyond the control of the Fire Department. The Fire department would like to advise the public on alternative numbers which may be used in case of emergencies.

The Royal St. Lucia Police Force wishes to inform the public, that in keeping with the provisions of Section 550-557 of the Criminal Code of St. Lucia 2013, it is not within the purview of the office of the Commissioner of Police to deny or approve any activity, where loud speakers will be operated, past 2:00 a.m.

We recognise that during this season, traditionally, J'ouvert activities are held island wide. Any such requests can be submitted through the office of the Commissioner of Police to Cabinet, the duly authorised body, for consideration for approval.

The Royal St. Lucia Police Force wishes to seek the cooperation of individuals in this regard as we continue to serve the general public.

Come one come all

Police Officers who have registered with Inspt Norbert for the Gar Inc Walk for a cause, are asked to collect their packages from her office at PHQ. 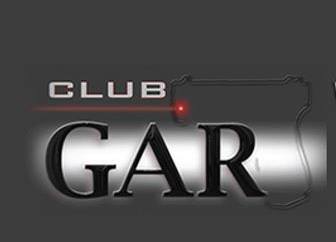 The annual Club Gar Walk 4 A Cause is here again. The walk is slated for May 28th, 2017. All interested Police Officers can register with Inspector Norbert at Police Headquarters/ 456.3724. The first thirty (30) Officers will be free, after which registration is $15.00

Matthew Joseph, a seventy (70) year old resident of Morne Jacques, was found suspended by the neck from a tree, by family members. About 11:00 a.m. that day, he had been reported as missing by relatives. Joseph was conveyed to the St. Jude Hospital, where he was pronounced dead by a medical practitioner.

A post mortem is scheduled for Monday, May 8, 2017.
The circumstances surrounding the death are currently under investigation 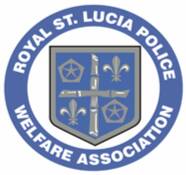 The Police Welfare Association would like to inform all members of a general meeting to be held on Friday, May 5th 2017 at the Finance Administrative Center, Point Seraphine Castries at 10:00 a.m.

At this meeting members shall have discussion on essential matters and shall also be appraised on recent Police Welfare Association activities.

Members in the South are advised that transportation will be leaving the Vieux Fort Police Station at 8:45 a.m.

INVITATION
All is invited

The post mortem examination, conducted by Dr. Stephen King, revealed that Dylan Joseph died as a result of cardiac tamponade secondary to stab wound to the chest.

A post mortem was conducted upon the body of Yves Rene, a thirty nine (39) year old resident of Fond Mange, Marigot, who succumbed to injuries sustained during a shooting incident involving the police, on Sunday, January 8, 2017.

This was the third homicide for the year 2017. 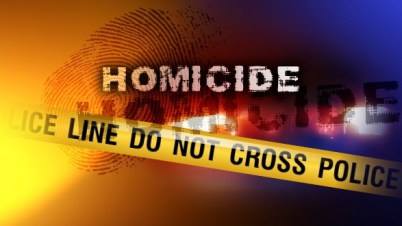 Police are investigating the circumstances surrounding the death of a twenty seven (27) year old resident of Jacmel, namely Uriaus Anthony.

Police received a report reference to a shooting at Bois Patat, about 11:45 a.m. on Monday, January 8, 2017. Uriaus Anthony was found beneath a shed, with multiple apparent gunshot injuries.

He was pronounced dead by a medical practitioner on the scene.

Investigations are continuing into this matter.

This is the eighth homicide for the year 2017.

Be the first to know and let us send you an email when Royal Saint Lucia Police Force Special Reserve posts news and promotions. Your email address will not be used for any other purpose, and you can unsubscribe at any time.

Other Government Organizations in Castries