We welcome your comments on postings at all Coast Guard sites/journals. The U.S.

If you're looking for the official source of information about the United States Coast Guard, please visit our homepage at www.uscg.mil These are sponsored by the U.S. Coast Guard to provide a forum to talk about our work providing maritime safety, security and stewardship for the American people to secure the homeland, save lives and property, protect the environment, and promote economic prosper

If you're looking for the official source of information about the United States Coast Guard, please visit our homepage at www.uscg.mil These are sponsored by the U.S. Coast Guard to provide a forum to talk about our work providing maritime safety, security and stewardship for the American people to secure the homeland, save lives and property, protect the environment, and promote economic prosper

Just wrapped up a busy nautical weekend on Coast Guard Island! Base Alameda was thrilled to welcome back the BSA Sea Scouts for the first time post-COVID. The Old Salts Regatta is an annual nautical competition hosted by Base Alameda dating back over 70 years. It is attend by 150+ Sea Scouts from throughout the Bay Area that cruise in or camp onboard for the weekend. Since 2018, the Sea Scout program is the official youth leadership development program of the Coast Guard Auxiliary. The competition also includes the Captain’s Cup Award. This award is presented by the Commanding Officer of Base Alameda to the Sea Scout Ship exemplifying the highest skill in whaleboat handling throughout the weekend competition. The trophy permanently hangs in the Base Alameda Galley with the plaques updated after every regatta. Congratulations SSS Viking for winning this year’s Captain’s Cup! Thanks to all the volunteers, Recruiting Office SF and MSST SF for all the support to make this year’s regatta a huge success!

Really excited to break ground on this project!!

Ribbon cutting and dedication planned for K9 Veterans Day in March 2023 Following a successful fundraising campaign in March, the Coast Guard Foundation is moving forward with plans to establish a memorial at Coast Guard Base Alameda where Coast Guard service dogs can be honored. 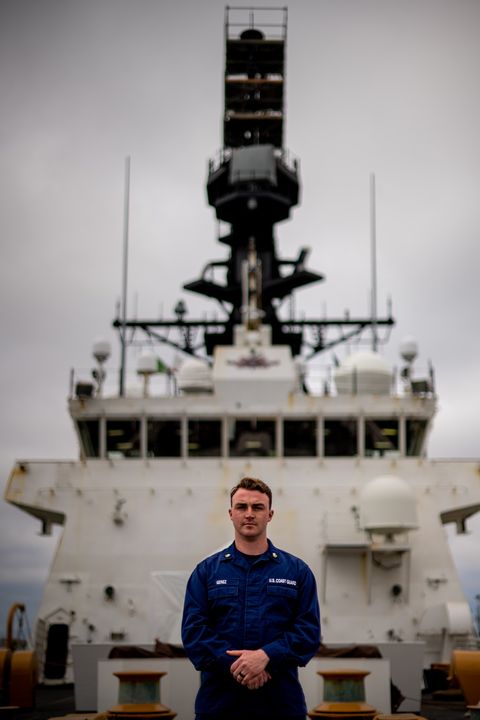 Good luck to Base Alameda’s own ET2 Gerez!! We’re cheering for you!!

Happy St. Patrick’s Day from Base Alameda! We celebrated on the basketball court with a 3x3 Basketball Tournament followed by a BBQ! Congratulations to our winners and thanks to the CG Enlisted Association for making the fun happen!!

Fair winds and following seas to Ms. Carmen Silva, who retired today after 36 years of dedicated service. She is a CG Island legend and has been a ray of sunshine for several generations of Coasties and countless CG Exchange patrons. We miss you already Carmen! Congratulations and enjoy your retirement!!!

Who’s ready for the upcoming Coast Guard Marathon/Half Marathon/5k??? Base Alameda got a sneak peak at the medals this week and they are epic!! Good luck to all runners!! U. S. Coast Guard Base, Elizabeth City, N. C.

Don’t miss our Children’s Holiday Party this Saturday 11am - 3pm!! Happy Halloween from Base Alameda!! Huge thanks to Base Alameda MWR, CGOA, CWOA, CPOA, CGEA, PCPOs, Community Partners, our volunteers and all our MWR patrons for an amazing Harvest Festival!!

Setup is nearing completion for tonight’s Harvest Festival! 5-7 tonight! Hope to see you there!!

Sometimes mission support comes in the form of 300 pumpkins and 200 bales of straw! Preps are underway for our annual Harvest Festival!! Don’t miss our spooktacular event Friday 29 October from 5-7 pm!!!

Base Alameda and our Coast Guard Families in Marina Village Housing are grateful for the incredible support we received from Alameda Municipal Power over the past two days to help us repair the electrical failure caused by our equipment casualty. THANK YOU to your entire team!!

Welcome Home CGC MUNRO!! Big thanks to our wonderful community partners from the Navy League and SeaWest for the welcoming committee and tasty treats!

Our annual Harvest Festival is just around the corner and MWR is looking for volunteers and Trunk or Treat participants! Candy galore, cash prizes for the top three trunks, ghoulish decorations, a FREE pumpkin patch, petting zoo, hay maze, music and MORE!!

Hope to see you there!!

Save the date for our spook-tacular event!!! THANK YOU to the Fall Chief’s Call to Initiation (CCTI) Prospective Chief Petty Officers (PCPO) and all the volunteers who came out yesterday morning to support the CGI Shoreline Cleanup and BBQ! It was great to see so many people out and about helping to make a difference within our CG Community. Our efforts netted nearly 1800 pounds of garbage removed from the shoreline!

Did you know that the Industrial Production Facility (IPF) is part of Base Alameda? Embodying the motto of “360 Degrees of Mission Support” the dedicated members of IPF Alameda utilize many different skills and trades to conduct industrial level work throughout the Coast Guard. Some of the projects IPF Alameda completed over the past year included construction of a concrete pad for our new trash compactor, erecting a much needed maintenance tent to support our Cutter Boat Pooling Program and 100% organic support of CGC STRATTON's recent dockside availability. We even deployed our Repair Team, twice! When Coast Guard units are negatively impacted by hurricanes or other natural disasters, we deploy our team to quickly conduct repairs. This enables the unit to return to a fully mission capable status as quickly as possible and remain Semper Paratus!

We will never forget.

BRAVO ZULU to our amazing MWR Team and all the volunteers who helped us host an awesome CG Day Celebration here at Base Alameda and thanks to everyone who joined us to celebrate the Coast Guard’s 231st Birthday!!

Our famous Coast Guard Day Celebration is back, bigger and better than ever!!! Save the date - this is going to be epic. Tickets on sale now at the MWR Rental Office from 0800-1400 daily or in the Exchange Lobby Area 1100-1300 M-W-F

The U.S. Coast Guard will not collect or retain Personally Identifiable Information unless you voluntarily provide it to us. To view the U.S. Coast Guard’s Privacy Policy, please visit: http://www.uscg.mil/global/disclaim.asp Any links provided to a U.S. Coast Guard presence on other third party sites is for your reference only. The U.S. Coast Guard does not endorse any non-government websites, companies or applications. Editorial content on this site is for informational purposes only and not authority for action. Views and opinions expressed do not necessarily reflect those of the Department of Homeland Security or the Coast Guard. Non-emergency contact information: Commander District Eleven (d) Coast Guard Island Bldg 52 Alameda, CA 94510

Be the first to know and let us send you an email when U.S. Coast Guard Base Alameda posts news and promotions. Your email address will not be used for any other purpose, and you can unsubscribe at any time.

Send a message to U.S. Coast Guard Base Alameda:

Other Public & Government Services in Alameda

We want to wish everyone a belated, safe and happy !

U.S. Coast Guard members from around the Bay Area and U.S. Coast Guard Base Alameda show us that even cleaning up our own backyards can have a big impact in helping our planet.

Due to some weather complications we had to push off our base cleanup, but there is never a bad time to help clean up our environment!

📸 SN Hunter Pesch
Today, The Eleventh Coast Guard District hosted elected officials and members from partner agencies from around the at U.S. Coast Guard Base Alameda for .

The 6535 crew tragically lost their lives in 2012 on a training flight in Mobile Bay, Alabama. Friends of LTJG Thomas Cameron, one of the lost crewmembers, participated in the event in remembrance of their friend and shipmate.

"Thomas was an amazing and unique friend and fellow pilot who did everything in life 110%," said Lt. Cdr. Justin Church. "To know Thomas, was to be inspired on a daily basis by him."

With over 20 intercollegiate and club sports available for cadets to compete in, the Coast Guard Academy's goal to produce leaders both on and off the field is second to none!

Are you interested in learning more about the US Coast Guard Academy?

Gerez and his teammates will be competing against several teams in the event tomorrow. The event is sponsored by the U.S. Coast Guard, and you know who we’ll be rooting for!

Feel free to tune in at: http://twitch.tv/PhillyEsports.

Fingers crossed 🤞...weather for next weekend is looking good for running in Alameda as well as in Elizabeth City 🏃‍♂️ 🏃‍♀️ 👌!!

National Security Cutters are capable of deploying globally where our crews conduct critical Coast Guard’s missions from protecting fisheries, intercepting narcotics at sea, enforcing U.S. laws and treaties and serving as search-and-rescue platforms protecting mariners and commercial fishermen in some of the most unforgiving elements!
To continue ’s support of military heroes during the holiday season, the team from our Martinez Renewable Fuels facility recently sponsored Operation Santa at the U.S. Coast Guard Base Alameda.

In addition to making a $15,000 donation to VietNam Veterans of Diablo Valley which benefits active military and Goldstar families – attendees were treated to gifts, gift cards, a meal, and of course, a visit with Santa Claus.

Other Public & Government Services in Alameda (show all)