USAS affiliates run both local and nationally-coordinated campaigns for economic justice in partnership with worker and community organizations. Since 1997, USAS has won precedent-setting campaigns, educated students about the growing dominance of corporations in the globalized economy, as well as the intersectionality of identity and social justice issues with the labor movement, and has trained tens of thousands of young activists to become skilled organizers, researchers, and campaigners in labor and social justice organizations. USAS seeks to hold accountable multinational companies that exploit the people who work on university campuses, in our communities, and in the overseas factories where collegiate apparel is produced. Students have unique leverage over the colleges and universities that are often the largest employers, the largest landlords, and large institutional investors in our communities and regions. Students also have leverage over the companies that value universities as clients. Over the past 15 years, USAS has won significant campaigns for organizing rights, fair contracts and living wage policies on campuses and in communities all across the US, using student power to support workers struggling to transform minimum wage jobs into living-wage, union jobs, and ensure universities support ethical contractors that set – not undercut – good employment standards in local economies. USAS is committed to building the next generation of progressive leaders who will be at the forefront of labor and social justice struggles. In carrying out this mission, we actively practice the principles of collective liberation to prioritize the development and mentorship of students of color, working class students mixed-race students, women, transgender, q***r and differently-abled students. We strive to build deep relationships with other grassroots movements because we believe the labor movement is part of broader struggle for global justice. Read more about our current national leadership and our mission, vision, and organizing philosophy at http://usas.org/ 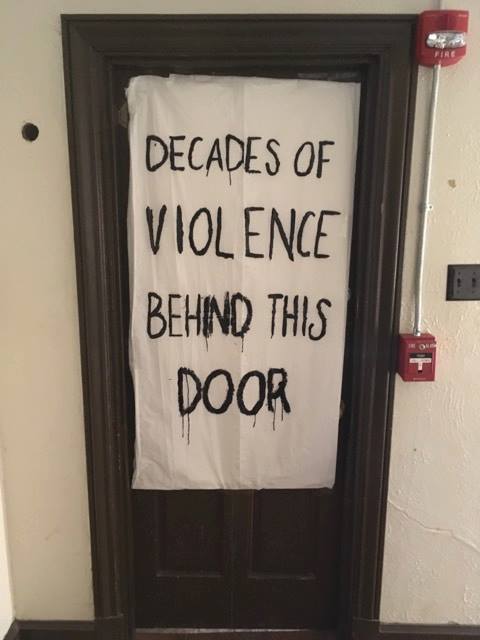 Swarthmore should be ashamed that the only thing they are willing to do for the countless people predated on by this fraternity is stop the fraternity’s activities for the rest of the year.

Yesterday at 4 PM, we began a take-over of Phi Psi fraternity. Since then, 100+ students so far have sat in with us, and slept over. We are here to demand the college take both short-term and long-term measures to end decades of fraternity violence from, and at, both Swarthmore Delta Upsilon Fraternity and Swarthmore Phi Psi Fraternity. We have been demanding the termination of the fraternity leases, the removal of the student from the so-called “rape attic” in Phi Psi, and the banning of fraternity parties immediately. Yesterday, administrators came here and told us President Smith has decided to agree to ban fraternity activity for the rest of the semester. This enormous win will ensure a temporary end to the harm that so regularly occurs at fraternity parties. It is a testament to the power of massive student protest, all week, up to and including this sit-in. But it’s not enough.

Phi Psi members repeatedly called the police yesterday, on their fellow students who were peacefully protesting violence. They called the first time directly after President Smith sent an email notifying campus of her decision to suspend fraternity activity.

Right now, the police are expecting us to leave this space this morning. We have decided we cannot leave. 20+ students are risking arrest. The events yesterday have showed us how retaliatory, and continuously dangerous, the fraternities are. We cannot leave as a student still lives in the room members themselves call a “rape attic”. We cannot wait by as the College waits on bureaucracy to keep us safe from fraternity retaliation. We will be here indefinitely.

This training is a great opportunity to be ready to help Movimiento Cosecha GR on May 1st!

Students from the Michigan Student Power Network (MSPN, also known as United Students Against Sweatshops Local #77) met with Grand Valley administration this morning to discuss their demands for better sexual assault prevention on campus. The group had delivered a letter of demand to administration a week prior.

“We are pleased to say that by the end of our meeting, Grand Valley administration verbally committed to implementing a mandatory aspect to our sexual assault prevention on campus, as well as the creation of a volunteer confidential crisis response team. The volunteers would be trained to handle trauma and sexual assault advocacy as well as deescalation. We look forward to working closely with administration to protect our survivors,” states a representative from MSPN.

Students from the Michigan Student Power Network (MSPN, also known as United Students Against Sweatshops Local #77) met with Grand Valley administration this morning to discuss their demands for better sexual assault prevention on campus. The group had delivered a letter of demand to administration a week prior.

“We are pleased to say that by the end of our meeting, Grand Valley administration verbally committed to implementing a mandatory aspect to our sexual assault prevention on campus, as well as the creation of a volunteer confidential crisis response team. The volunteers would be trained to handle trauma and sexual assault advocacy as well as deescalation. We look forward to working closely with administration to protect our survivors,” states a representative from MSPN.

Tonight we are doing a vigil in solidarity with the asylum seekers and we are walking downtown to the three ICE offices in Grand Rapids.

To demand property owners in Grand Rapids end collaboration with ICE by renting them space at 3 different locations: bit.ly/NoICEinGR

To submit a public comment against the Trump administration's attempt to block immigrant families from having a secure future in the United States and scare them away from seeking access to health care, nutrition, and housing programs: https://protectingimmigrantfamilies.org/#take-action

After producing for Nike for 17 years, 1,500 unionized workers at the Kaho Indah Citra Garment factory will find themselves without a job so that the company can switch to cheaper labor. This is just the start of Nike’s plans to pull 30,000 jobs from the country that built its empire. Nike is basically saying: “Believe in profits. Even if it means sacrificing workers’ livelihoods.” #nike #nikesweatshops #nikeresponsibility #nikewalkthetalk #nikexploitation

There are indeed multiple tactics we can use to be in solidarity against injustice just like our USAS Local #77 GV United Students Against Sweatshops
"On January 27, 2016 a community coalition in Grand Rapids, Michigan led by United Students Against Sweatshops organized groups of passengers to board buses and refuse to pay their fares in support of transit workers fighting to preserve pensions and combat fare hikes. A leaflet distributed by the riders and shared with drivers argued that the agency’s 'recent actions toward you and your riders is a form of economic violence that I won’t condone.'"
https://www.jacobinmag.com/2018/06/strike-collective-action-work-to-rule

Abercrombie & Fitch, do #AdventuresOfAnF include sewing in dangerous workplaces? #signtheAccord

Just 10 days left to apply to the MSPA organizer fellowship!!!
Join an amazing statewide community and connect with the skills to make a difference!

During this holiday, student workers at Rutgers University and members of Rutgers United Students Against Sweatshops Local 109 experienced further retaliation from campus police. We encourage all members, alumni and allies to sign today. Rutgers University Alumni Association we ask you to divest your university donations until administration calls off the cops and gives 13,000 workers a living wage. #15OnCampus #USASfor15

We are excited to share with you a snapshot of our favorite numbers in 2017! These wins were made possible because of the tireless work of students and workers in the U.S. and around the globe, and the unwavering support of our allies. We look forward to building with you in 2018. Cheers!

United Students Against Sweatshops stands with the ATU Rapid workers!

NO CONTRACT, NO MILLAGE!!!

An intersectional display of solidarity: Union workers and immigrants came out to support each other’s struggles at the GR City Commission meeting last night

An intersectional display of solidarity: Union workers and immigrants came out to support each other’s struggles at the GR City Commission meeting last night

Recently Equity PAC decided to endorse the transit millage. While doing so they decided to say some very disrespectful things about our Union. Here is President RiChard Jackson's response. Please Share.

A Eulogy for Public Education: Demonstrators march in Grand Rapids and denounce the policies of Betsy DeVos

A Eulogy for Public Education: Demonstrators march in Grand Rapids and denounce the policies of Betsy DeVos

About 60 people gathered in downtown Grand Rapids yesterday, to hold a mock funeral for public education. Organized by the Michigan Student Power Network, people met at Monument Park, most dressed …

Check out what different USAS locals have achieved in the past year!

United Students Against Sweatshops is a national student labor organization fighting for workers' rights with locals on over 150 campuses.

"We don’t need to depend on our celebrities and athletes to do it. We can do it ourselves."

Grand Valley USAS Stands in solidarity with Dana, and the students of color at University of Michigan, Ann Arbor; we believe in solidarity and support of communities of color. If they rise up, we all rise. And if they kneel, we all kneel.

Dana has been a student at the University of Michigan for five years. Today he is kneeling on the "M" in the diag to draw attention to racism on campus and the university's failure to address it. He has been here since 6AM. He will stay here until Schlissel addresses him and the needs of Black and Latinx students. Please come by and show him your support, and share his message widely. #SchlisselWYA #WhyIKneel

UPDATE 8:25PM: Dana Greene Jr. is still on the diag. He still needs people to come to the diag and stand with him. He is planning to stay for 24 hours (until 6AM) and needs people with him throughout (though he has kindly said that he doesnt expect people to stay). If you have shared this and are able, please go and be with Dana on the diag.

Last night, Northeastern students stood alongside campus food service workers as they announced a strike vote authorization. Students will continue to stand by the workers until their demands for a $35,000 salary for full-time employees and affordable health care are met.

Skylar Hill of GVSU USAS sharing the effect Betsy DeVos has had on her region and school!

Student Senate is voting on a resolution to change Columbus Day to Indigenous Peoples' Day today at 4:30 in Pere Marquette in Kirkhof! Please come out and support, it is incredibly important to put pressure on Grand Valley to stop honoring genocide!!!

GV United Students Against Sweatshops stands in solidarity with the call to replace Columbus Day with Indigenous Peoples' Day at Grand Valley State. It is absolutely abhorrent for us as a school to celebrate a holiday that honors white supremacy and genocide, and we hope Grand Valley State University Student Senate makes the decision to support the indigenous students they represent, as well as an ethical Grand Valley.

Michigan Remembers, that's why we know we all have to #stopBetsy

Michigan students know we need to #stopBetsy
Tune in tomorrow for more!

Today is the start of our food drive! Individuals can drop off in ASH 2172, instead of Kirkhof Center. We thank you all.

Be the first to know and let us send you an email when GV United Students Against Sweatshops posts news and promotions. Your email address will not be used for any other purpose, and you can unsubscribe at any time.

Send a message to GV United Students Against Sweatshops:

Other Public & Government Services in Allendale

Are there any active USASers at GVSU this year? Peace, JWK