Barnstable Professional Firefighters Local 3276. This local consists of 17 members Donations are accepted throughout the year.

The Barnstable Professional Firefighters Local 3276 is the unionized members of the Barnstable Fire Department. It is made up of the 17 suppression staff members of the department and is heavily involved in the community in fundraising, donations of money, time and

The Barnstable Professional Firefighters Local 3276 is the unionized members of the Barnstable Fire Department. It is made up of the 17 suppression staff members of the department and is heavily involved in the community in fundraising, donations of money, time and

Chief Jenkins Has Passed: The West Barnstable Fire Department regrets to announce the passing of Fire Chief John P. Jenkins – Retired. John served as West Barnstable’s Fire Chief for 32 years from 1973 to 2005. He was first elected fire chief at the age of 27. John loved West Barnstable and the West Barnstable Fire Department. John was born to be a firefighter and fire chief, having ridden his bicycle to fires as a teenager, joining the WBFD in 1962. His chicken coop on Parker Road served as the WBFD’s Fire Station No. 2 for about two decades, until he oversaw the building of our current fire station in 1988. In the 1970s and 1980s, Chief Jenkins was well known for his calling of the BINGO numbers at the weekly WB Firefighter’s Bingo Fundraiser at the BWB Elementary School. Additionally, he served as the Town of Barnstable Forest Fire Warden, was a salesman for Pierce Fire Apparatus, and was famous for his Hot Dog Truck, “John’s Dogs”, – he made great clam chowder and hot dogs. The passing of John is a great loss to the entire West Barnstable Community.

Engine 202 with group 1 investigating a small contained fuel spill after the heavy rains.

The Barnstable Fire Department is excited to announce some upcoming changes to its command staff. Fire Chief Francis Pulsifer has announced his retirement effective November 17th, 2022. With Chief Pulsifer’s retirement, The Barnstable Fire District Prudential Committee, at its September meeting, have voted to promote Deputy Fire Chief Chris Beal as the next Fire Chief and Captain Kevin Brailey as the next Deputy Fire Chief. The department would like to wish Chief Pulsifer congratulations on his well-earned retirement and congratulate Deputy Beal and Captain Brailey on their promotions.

Busy start to the day in Barnstable.

The Barnstable Fire Department is seeking qualified applicants for the full-time position of Firefighter-EMT or Firefighter-Paramedic. Please see the attached employment posting for an opportunity to work for a great fire department.

Preparing for 988
Launching on July 16, 2022, 988 will become the national three-digit dialing code for the National Su***de Prevention Lifeline.

BARNSTABLE – As you will see in the following HN video, police and firefighters worked together to free a badly injured driver from a rollover crash shortly after 1:00 a.m. this morning. The single vehicle crash took down a utility pole and power lines on Phinney's Lane, in the vicinity of...

Thoughts and prayers to our brothers and sisters of Local 22

Two firefighters were trapped in the rubble of a collapsed building in Philadelphia’s Fairhill neighborhood Saturday morning.

Free blood pressure checks at Sturgis Library! A paramedic will be on available June 13th 1030-1130 for anyone that would like to have theirs checked. Get free information about how you can prepare for a medical emergency!

To learn more about the history of the day, visit www.firefightersday.org.

Youth firesetting is on the rise in Massachusetts and underreported nationwide. Cape Cod first responders train to prevent kids from starting fires.

Please keep the members of the FDNY in your thoughts. This afternoon 31year old FF. T. Klein of Ladder 170 lost his life battling a fire.

ENDORSEMENT ALERT:
I am excited to share with you that our campaign for Barnstable County Sheriff has been endorsed by the Barnstable Firefighters (IAFF Local 3276). I’ve built a long history and a lot of friendships with their outstanding, dedicated members and their endorsement means very much. I am very grateful for their friendship and for their confidence in my ability to serve as your next Barnstable County Sheriff.

Our campaign has previously been endorsed by:

More to come. Thank you all so very much.

Attorney General Garland announced the award recipients today in Atlanta. Officer Danielle St. Peter of the Barnstable Police Department and School Resource Officer Tom Hart of the Walpole Police Department were selected and honored for their exceptional work in Innovations in Community Policing.

“Officers St. Peter and Hart are exemplary representatives of our law enforcement community, and their selflessness and commitment to serving their communities is what earned them today’s honor,” said United States Attorney Rachael S. Rollins. “I had the privilege of speaking with both of their Police Chiefs today to personally offer my congratulations. Chief Sonnabend and Chief Kelleher are each incredibly proud of their Officers, as they should be. The dedication to public safety displayed by these two Officers is representative of the many men and women across the Commonwealth who honorably protect and serve our communities everyday as police officers. On behalf of all their federal law enforcement partners in the District of Massachusetts, I want to publicly thank Officer St. Peter and Officer Hart for their service and congratulate them on this tremendous honor.”

“The work of law enforcement has always been difficult—but perhaps no more so than in the recent past, as officers have faced a host of significant challenges. The officers and deputies receiving this year’s awards demonstrate how so many go above and beyond, even in the midst of trying circumstances,” said Attorney General Garland. “Every day, thousands of people who work in law enforcement forge and maintain strong community ties that are essential for ensuring public safety. The recipients of this award represent quintessential examples of such critical efforts. It is an honor to recognize them.”

The Attorney General’s Award recognizes individual state, local, Tribal and territorial police officers, deputies and troopers for exceptional efforts in community policing. The awarded officers and deputies have demonstrated active engagement with the community in one of three areas: innovations in community policing, criminal investigations, or field operations. This year, the Department received 185 nominations from 145 agencies, recognizing a total of 347 individual officers, deputies, and troopers. There were 39 states represented in the nomination pool, covering state, local, campus, sheriff and other agency types.

The Department of Justice works closely with national law enforcement stakeholder groups during the award review period, taking advantage of their expertise and experience to determine the recipients in a competitive nomination process. The Department also works closely with its components, utilizing the breadth of knowledge within the Department to ensure a successful program that honors the exceptional service of our nation’s law enforcement officers and deputies.

Complete information on the Fifth Annual Attorney General’s Award for Distinguished Service in Community Policing can be found at https://www.justice.gov/ag/policing-award.

All 4 groups have begun to train on our new Ladder 206. We are very fortunate to have this replace our 30 year old Ladder 206.

Charity hockey game for Mayah White! Saturday April 9, 2022 at the Hyannis Youth and Community Center. Get your tickets by scanning the QR code below!

Good Job Braggs Lane and Hyannis-Barnstable Road! If you are out clearing snow and have a fire hydrant on your property, please help us by clearing away snow in the event the hydrants are needed 

T-shirts are available for purchase at the fire station for 20.00. They feature our "Marvin the martian" logo. Sizes and color availability varies.

Be the first to know and let us send you an email when Barnstable Firefighters L-3276 posts news and promotions. Your email address will not be used for any other purpose, and you can unsubscribe at any time.

Swearing into the union! 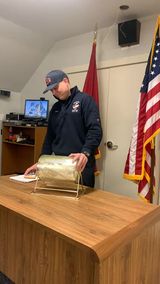 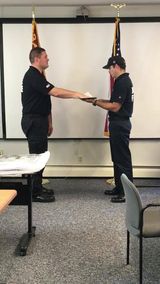 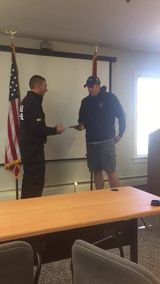 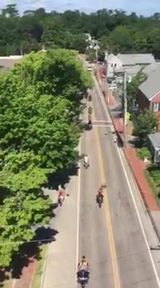 Other Government Buildings in Barnstable

Our condolences to the Jenkins family as we honor Chief John Jenkins
Engine 202 with group 1 investigating a small contained fuel spill after the heavy rains.
Ladder 206 worked this fire today!
Busy start to the day in Barnstable.
x

Other Government Buildings in Barnstable (show all)