The Rotary Club of Chester-Long Valley is part of Rotary International, which is the largest Service organization in the world.
(2)

VENDORS CURRENTLY SIGNED UP FOR THIS SEASON:

MORE VENDORS WILL BE ADDED PRIOR TO SEASON OPENING. THEY WILL BE POSTED AS THEY COME ON BOARD.

WE ARE ALWAYS LOOKING FOR NEW VENDORS. IF YOU HAVE A FARM OR CRAFT RELATED BUSINESS AND WOULD BE INTERESTED IN BEING AT THE FARMERS’ MARKET, PLEASE GIVE BILL MCGUIRE A CALL ON 908-876-3584.

HOPE TO SEE YOU AT THE MARKET. 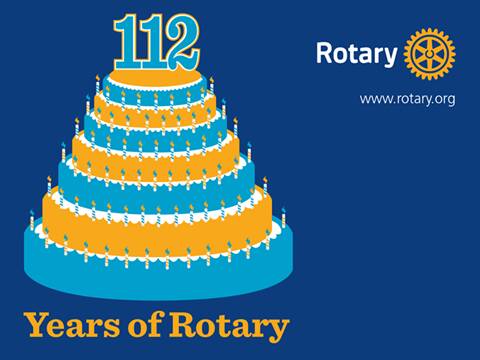 February 23 was Rotary's 112th anniversary! Together we have taught young people to read, improved access to clean water and fought disease.

The Rotary Clubs in this area are looking for 28 students to represent the region in a cultural exchange with Japan.

The Ross Redmond Short Term Youth Exchange Program, now in its 38th year, offers students ages 16 to 19 the opportunity to learn about Japanese culture, interact with Japanese students, and "form friendships that will last a lifetime," said Jim Allison, the program's chairman.

The three-week trip, tentatively departing on Friday, June 30, and returning on Friday, July 21, will include visits to major cities in southern Japan, including Osaka, Kyoto and Nara.

There also will be a separate trip to Hiroshima to visit Peace Memorial Park and the Holocaust Museum.

The group will stay on the island of Shikoku, the smallest of the four main islands in Japan. During the course of the trip, each student will meet and live with four host families in each of the island's four prefectures.

The total cost of the trip, including food, lodging and airfare, is $3,000. Students, who must live or attend school within Rotary District 7470 -- which encompasses Morris, Essex, Sussex and Warren counties -- are selected through an interview process that occurs during February and March.

Applications are being accepted until Wednesday, March 15. To apply, visit the Rotary District 7470 website for the Japan exchange at http://rrstye.rotarydistrict7470.org/.

Information about Rotary District 7470 is available at www.rotarydistrict7470.org.

One of our honored speakers: This is a do not miss once in a lifetime example to hear about overcoming adversity. 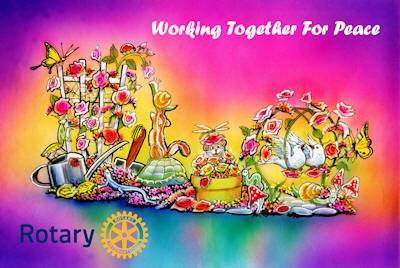 Did you watch the Tournament of Roses - Rose Parade? We did and we all cheered with excitement when we saw the gorgeous Rotary International Float appear.

Rotary International's 2017 Float promotes and celebrates the 100 years of The Rotary Foundation. The Foundation empowers Rotarians to travel throughout the world and create and complete projects which serve people in need in six areas of focus which are: promoting peace, fighting disease, providing clean water, saving mothers and children, supporting education, and growing local economies.

The spectacular and colorful dragon is clearly a world traveler carrying luggage decorated with the six symbols of the areas of focus. The Dragon also is proudly wearing a necklace with a medallion marked 100 for the 100 years of service.

Congratulations to the Rotary Rose Parade Float Committee for a job well done!

ROTARIANS ARE THANKFUL ON THANKSGIVING!

Rotarians are thankful for the opportunity to serve and represent our professions. We know of many causes, many opportunities to volunteer, and we are aware that members of our Rotary Club have made a huge impact in our local & international communities.

The Eradication of Polio in the world is almost completed. There are only two countries that have active cases of Polio, and it is Rotary who has helped and will continue the fight until we have completed the task, to rid the world of Polio

That each day, inner city children have a safe place to participate in a free after-school program. These kids have a chance to get homework help, a nutritious snack, play, learn and have fun at the

We support literacy. The Rotary Summer Literacy program offers children from across Ossining the opportunity to maintain and increase their literacy levels by receiving both a dictionary and a Thesaurus.

We invest in young people. We have been involved Interact, Rotaract, RYLA and supported both scholars and young professionals from around the world.

We have the opportunity to meet each week, hear a speaker, network and enjoy the fellowship of Rotarians. We have many riches to share with each other remembering our motto of SERVICE ABOVE SELF

Get your pickles on a stick at the Chester Farmers.Market until 4pm today 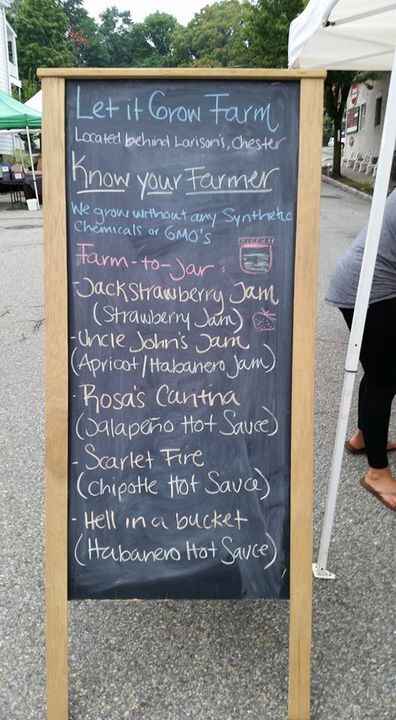 Let It Grow Farm in Chester is setting up

Lots of great stuff today in chester 10am to 3pm

There will be no Rotary meeting on July 7th due to its being 4th of July week.

Our next meeting will be Thursday, July 14th at Redwoods at 11:45AM.

The Chester-Long Valley Rotary recently donated a 110 pound rescue dummy to the Chester Fire Company. The rescue dummy, already named “Bernie” by the Fire Company, will be used during training exercises for search and rescue drills. The dummy is designed to simulate the dead weight feeling of moving an unconscious victim. The rescue dummy will provide a more realistic and safer training for the members of the fire company. It will be used during automobile extraction drills to simulate trapped victims. It can also be used for high and low angle rescues to simulate having the weight of a patient in a stokes basket or sling at high angles instead of using an actual person which could risk injury.

The Chester-Long Valley Rotary is always looking for people who are interested in providing service to the community. Everyone is welcome to join us. Rotary meets each Thursday: 1st Thursday evening at NY Pizza at 6:30pm, remaining Thursday meetings at 11:45am at Redwoods. Call Bill McGuire on 908 876 3584 for more information.

The Chester-Long Valley Rotary recently donated a 110 pound rescue dummy to the Chester Fire Company. The rescue dummy, already named “Bernie” by the Fire Company, will be used during training exercises for search and rescue drills. The dummy is designed to simulate the dead weight feeling of moving an unconscious victim. The rescue dummy will provide a more realistic and safer training for the members of the fire company. It will be used during automobile extraction drills to simulate trapped victims. It can also be used for high and low angle rescues to simulate having the weight of a patient in a stokes basket or sling at high angles instead of using an actual person which could risk injury.

The Chester-Long Valley Rotary is always looking for people who are interested in providing service to the community. Everyone is welcome to join us. Rotary meets each Thursday: 1st Thursday evening at NY Pizza at 6:30pm, remaining Thursday meetings at 11:45am at Redwoods. Call Bill McGuire on 908 876 3584 for more information.

What 30-Somethings need to know about Rotary

What 30-Somethings need to know about Rotary

By Michael Bucca, a member of the Rotary Club of Central Ocean Toms River, New Jersey, USA You might think that I, a 32-year-old member of a 110-year-old organization, would be preoccupied with try…

400 Dictionaries handed out to 3rd Graders

400 Dictionaries handed out to 3rd Graders

400 Dictionaries handed out to 3rd Graders The Rotary Club of Chester-Long Valley handed out over 400 dictionaries to the 3rd-grade students and teachers in four local grade schools. The schools receiving the dictionaries are Old Farmers Road School, Cucinella School, and the Flocktown-Kossmann Scho…

Evanston, Ill., (08 October 2015) – Kristen Bell is the newest face to join Rotary's 'This Close' public awareness campaign for polio eradication. A paralyzing and life altering disease, polio is on the verge of becoming the second human disease ever to be eliminated worldwide after smallpox.

Bell joins Rotary's fight against polio as the service organization and its partners in the Global Polio Eradication Initiative enter the final push to eliminate the vaccine-preventable disease. With the historic removal of Nigeria from the list of polio-endemic countries last month, just two continue to report polio cases: Pakistan and Afghanistan.

"I am overjoyed to work with Rotary at such an important moment in history," Bell said. "To help create awareness about this horrible disease is exhilarating."

Bell is best known for her roles as the quick-witted, sassy title character in the hit series Veronica Mars, razor-sharp Jeannie van der Hooven of House of Lies, and the voice of Princess Anna of Arendelle in Disney's third highest-grossing film Frozen. She became interested in the importance of vaccines after the birth of her two daughters, Lincoln (age two) and Delta (age one).

"As the mother of two young girls, I can't emphasize enough how important it is to make sure every child is safe," she said. "Polio can be prevented with just 60 cents worth of vaccine - there's absolutely no reason any child should suffer from it. Hopefully by lending my voice to send this message, I can help rid the world of polio forever."

As part of the 'This Close' campaign, Bell will be featured in ads raising her thumb and forefinger in the 'this close' gesture with the tagline 'we're this close to ending polio.' Since the initiative launched in 1988, the incidence of polio has plummeted by more than 99.9 percent, from about 350,000 cases a year to less than 400 confirmed in 2014.

Rotary launched its polio immunization program PolioPlus in 1985 and in 1988 became a spearheading partner in the Global Polio Eradication Initiative with the World Health Organization (WHO), the United Nations Children's Fund (UNICEF), the U.S. Centers for Disease Control and Prevention (CDC) and more recently the Bill & Melinda Gates Foundation.

Rotary's roles within the initiative are fundraising, advocacy, raising awareness and mobilizing volunteers. To date, Rotary has contributed more than $1.4 billion and countless volunteer hours to fight polio. Through 2018, every dollar Rotary commits to polio eradication will be matched two-to-one by the Bill & Melinda Gates Foundation up to $35 million a year. To date, more than 2.5 billion children have been immunized against the paralyzing and sometimes deadly poliovirus.

About Rotary
Rotary brings together a global network of volunteer leaders dedicated to tackling the world's most pressing humanitarian challenges. Rotary connects 1.2 million members of more than 34,000 Rotary clubs in over 200 countries and geographical areas. Their work improves lives at both the local and international levels, from helping families in need in their own communities to working toward a polio-free world.
https://www.rotary.org/en/kristen-bell-signs-rotary-celebrity-ambassador-polio-eradication

Bill Gates congratulates Rotary International members around the world for their tireless fight to end polio in Southeast Asia. "Thanks to these efforts, Rot...

Rotary has been named one of the top 10 nonprofits creating change in the world by CNBC. http://on.rotary.org/CNBCrotary

After traveling in war-torn Nepal in 2006, Maggie Doyne changed her life's course. Today, she and her nonprofit care for and educate hundreds of children.

Congratulations! to Maggie Doyne
CNN's Hero of the Year
Maggie is an inspiration to all of us.

Maggie Doyne, the 18-year-old, wide-eyed Mendham High School graduate set off on a journey she could have never predicted, building an orphanage and school in Nepal.

After months of nominations and an online audience vote, CNN names Maggie Doyne the 2015 Hero of the Year at the "CNN Heroes: An All-Star Tribute" award show.

10th Annual Gingerbread House Display & Contest is Back.
Preregister online by December 1st. Gingerbread creations will be on display at the Long Valley Green Market.

All children, families, Seniors, Groups and Professionals are welcome to enter a gingerbread creation of their own design for display and prizes. For more information or to Pre-registration go to http://lvva.org/gingerbread-house-contest-registration/

Be the first to know and let us send you an email when Rotary Club of Chester-long Valley posts news and promotions. Your email address will not be used for any other purpose, and you can unsubscribe at any time.

Other Government Organizations in Chester