Our membership includes recent veterans and active duty servicemen and servicewomen from all branches of military service, National Guard members, and reservists who have served in the United States military since September 11, 2001.
(2)

Iraq Veterans Against the War (IVAW) was founded by Iraq war veterans in July 2004 at the annual convention of Veterans for Peace (VFP) in Boston to give a voice to the large number of active duty service people and veterans who are against this war, but are under various pressures to remain silent. From its inception, IVAW has called for:
•Immediate withdrawal of all occupying forces in Iraq;
•Re

Iraq Veterans Against the War (IVAW) was founded by Iraq war veterans in July 2004 at the annual convention of Veterans for Peace (VFP) in Boston to give a voice to the large number of active duty service people and veterans who are against this war, but are under various pressures to remain silent. From its inception, IVAW has called for:
•Immediate withdrawal of all occupying forces in Iraq;
•Re

Tomas Young Dies at 34; Critic of Iraq War in Film

Tomas Young Dies at 34; Critic of Iraq War in Film

Mr. Young was the subject of a film that showed the devastating human cost of the war and argued that it should have never been fought. 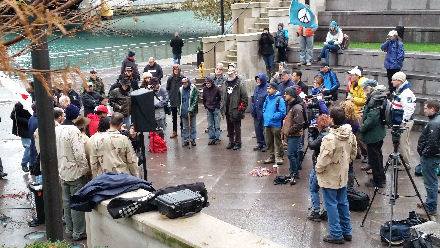 Thank you Andy Thayer of the Gay Liberation Network for the photos! #veteransday #chicagoivaw

If you missed IVAW's Veterans Day Observance you can watch at this link. Thank you CAN TV for the coverage! #chicagoivaw #veteransday

Iraq Veterans Against The War gather to oppose the escalation of war in Iraq and Syria and to honor the deaths of veterans recently lost to suicide. This pro...

WASHINGTON (AP) — A Pentagon official says a team of U.S. Army Special Forces were flown atop Sinjar Mountain in northern Iraq to get a firsthand look at possible ways to rescue stranded Iraqi civilians suffering from thirst and hunger. A de...

The U.S. conducted its first airstrike against Islamic militants outside the Kurdish city of Irbil in Iraq on Friday, the Pentagon confirmed. Military aircraft dropped two 500-pound bombs on ISIL artillery being used to shell Kurdish forces. Obama...

The House on Friday overwhelmingly passed a symbolic resolution that calls for the executive branch to attain explicit approval from Congress before deploying troops to Iraq in a "sustained combat role," in what peace campaigners are heralding as an important milestone in efforts to prevent a new wa…

Mosul w/out Christians for First time in 1,900 Years as Radical Fundamentalists Threaten Minorities

Mosul w/out Christians for First time in 1,900 Years as Radical Fundamentalists Threaten Minorities

By Juan Cole For the first time in nearly 2000 years, there are virtually no Christians in the city of &helip

"Evacuate Where? Have you Seen [how teeny] Gaza is?" - Jon Stewart

"Evacuate Where? Have you Seen [how teeny] Gaza is?" - Jon Stewart

Afghanistan: The Other War of Aggression That Needs to End

Our IVAW brother Jovanni Reyes writing on the need to end the war in Afghanistan.

U.S. troops in Afghanistan. (Photo: US Army/ cc/ Flickr)As violence in Iraq continues, and Israel escalates its brutal assault on Gaza, the human tragedy of boundless war and militarism could not be more clear. Yet, despite overwhelming U.S. public opinion that the so-called War on Terror (which amo…

Thank you to all the great people who came out and supported Chicago IVAW's Memorial Day events! Another great Memorial Day, expect many more great events from the Chicago chapter!

"No NATO, No War": U.S. Veterans of Iraq and Afghanistan Return War Medals at NATO Summit

Two years ago, IVAW got down in Chicago!!!

DemocracyNow.org - Democracy Now! broadcasts from Chicago, site of the largest NATO summit in the organization's six-decade history. On Sunday, veterans of t...

Iraq Veterans Against the War

Vincent Emanuele returned from two tours of Iraq suffering from Post Traumatic Stress Disorder. He has since become an outspoken critic of the U.S. missions to Iraq and Afghanistan, and the treatment of veterans by his government.

IVAW Chicago member Vince Emanuele meeting with former Australian Prime Minister Malcolm Fraser. Must have been an interesting conversation regarding foreign policy. We wish Vince well on the rest of his trip!

We commend Fearless Leading by the Youth (FLY) and Southside Together Organizing for Power (STOP) who are demanding a level 1 trauma center on Chicago's southside. As many people know throughout the country Chicago itself is a war-zone with massive violence in it's communities and some of those most affected by this violence have completely inadequate emergency response facilities, having to drive miles to get to a trauma center. The University of Chicago and the City can do something about this. There's no reason people should have to be driven miles away and die in an ambulance on their way to a level-1 facility.

For young people, there aren’t too many gray areas. Something is or it isn’t. On Thursday at 6 p.m., several community organizations made up of teens, will host a Town Hall Meeting at University Church, 5655 S. University Ave., to voice concerns about the University

Can't believe it's almost been 2 years since NATO. A less known piece on the event.

A few days in the life of Iraq Veterans Against War. After serving their country, they are fighting against it for the right to heal.

Some pictures from the past, enjoy!

Some pictures from the past, enjoy!

Second in the archive!!! Enjoy!

Second in the archive!!! Enjoy!

Over two thousand years after Sun Tzu lived, the nature of war has not changed. War still impoverishes most people today.

US VETERAN FOR PEACE ASKS ADFA RECRUITS: LAY DOWN YOUR WEAPONS

US IRAQ war veteran Vince Emanuele has come to Australia to wage peace against war. Vince was deployed twice to Iraq, and on the basis of his experience ther...

For years, U.S. government agencies have told the public, veterans and Congress that they couldn't draw any connections between the so-called "burn pits" disposing of trash at the military's biggest bases and veterans' respiratory or cardiopulmonary problems. But a 2011 Army memo obtained by Danger…

A Widening War: Iraq intervenes in Syria with Helicopter Gunships

A Widening War: Iraq intervenes in Syria with Helicopter Gunships

For the first time, Iraqi helicopter gunships have crossed the border to hit a target inside Syria. They destroyed 8 &helip

How CIR is helping localize our reporting on veterans’ wrongful deaths | The Center for...

How CIR is helping localize our reporting on veterans’ wrongful deaths | The Center for...

Whenever we get our hands on a good dataset, we try to identify and encourage opportunities for other journalists and media partners to use the information as well. CIR’s veterans coverage has been particularly fruitful for collaboration and localization.

Senate Democrat: Preventing Veteran Suicide Is 'The Cost Of War'

Senate Democrat: Preventing Veteran Suicide Is 'The Cost Of War'

WASHINGTON -- Sen. John Walsh (D-Mont.) posed a question to his colleagues on Capitol Hill this Sunday: If lawmakers are willing to spend billions of dollars on war, why are they less willing to invest in the welfare of veterans when they come home? ... 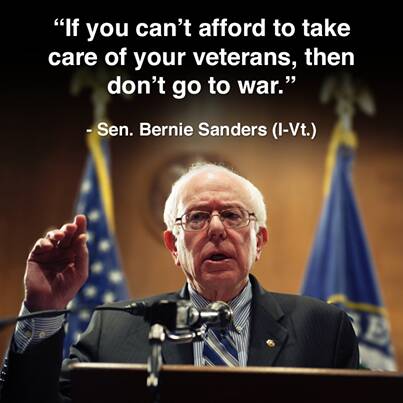 US Sending Paratroopers to Baltics As Ukraine Boils

US Sending Paratroopers to Baltics As Ukraine Boils

As the Obama administration publicly warned Russia against further provocative acts relating to the ongoing tensions in Ukraine on Tuesday, it also announced that U.S. paratroopers from the 173rd Infantry Brigade Combat Team (Airborne) based in Italy are heading to Poland and the Baltic states of Li…

Exclusive: U.S. force in Afghanistan may be cut to less than 10,000 troops

WASHINGTON (Reuters) - The number of U.S. troops in Afghanistan may drop well below 10,000 - the minimum demanded by the U.S. military to train Afghan forces - as the longest war in American history winds

Our friend Kait McIntyre's campaign video for her campaign to be on Boeing's Board. We wish her the best!

We Don't Want You to Swim in the River

Our friend Kathy Kelly in Truth Out.

The last time North Korea got frisky, the Navy showed off an anti-missile laser. Now, with the crisis continuing in Ukraine, the Navy is showing off something even scarier.

We should demand the truth about the death of Pat Tillman.

We Wish Vince well on his speaking tour in Australia!

Vince is a former US Marine, with two tours of duty in Iraq as a combat infantryman, refused to do a third. He returns to Sydney in May to present an anti-war film.

Russian President Vladimir Putin has belittled the threat of more American sanctions over the crisis in Ukraine. But Iranian officials and businessmen are privately warning the Kremlin not to be so dismissive.

The U.S. bombing of Baghdad in 2003. (File)Greater Boston and its citizens are the focus of media attention in recognition of the first anniversary of the Boston Marathon bombings that took three innocent lives and injured over 264 people, some of them severely. City leaders praised the heroism of t…

Eric Holder: Insist my case be tried in a Veterans Court!

Please SIGN & SHARE this petition for our friend and fellow IVAW member Emily Yates to be tried in a Veterans Treatment Court. Thank you!

I used to think that as a veteran of the U.S. military, I was safe, at least while in America, from being brutally arrested with no warning, thrown...

Be the first to know and let us send you an email when Chicago IVAW posts news and promotions. Your email address will not be used for any other purpose, and you can unsubscribe at any time.

Send a message to Chicago IVAW:

Other Government Buildings in Chicago

“The empire is a giant machine cranking out racism, misogyny, poverty and climate chaos. War is coming for your children and your planet. Make the connection between war and your community. There is widespread anti-war sentiment but without organizing “units of power,” these attitudes will not become a mass movement.”
“Are we ready to engage anti-war people wherever we find them? If we can look beyond our electoral obsessions or rigid categories and set our sights on organizing and movement building we might see that Sander’s, Gabbard’s, Williamson’s and Gravel’s base of supporters represent what is quite possibly the largest contingent of new anti-war activists in the US. There are many thousands of good people that want to stop climate change and end war.”
Would lowering the age of recruitment fix the military’s recruiting worries? By: Shane McCarthy​ Lowering the age of enlistment to 16 could be another alternative. For one, many of the factors that disqualify older youth from joining — like criminal records — are not as present in younger teens. Currently, of the 75 percent of 17- to 24-year-olds who are ineligible to serve, for example, 10 percent are ineligible due to criminal records. And according to the Department of Justice there are twice as many arrests of 18- to 20-year-olds as there are arrests of 15- to 17-year-olds. It’s also significantly cheaper to digitally target a younger audience — about 30 percent cheaper for ages 13 to 16 than ages 17 to 24. And 16-year-olds show a greater propensity toward military service than 18-year-olds — 23 percent versus just 12 percent. Recruiting younger teens is not uncommon. Canada, for example, allows 16-year-olds into the reserves once still in full time education. The United Kingdom allows anyone from 15 years and 7 months old to drop out of school with permission from parents and join the military. And enlisting doesn’t have to mean deploying right away. The U.S. already has procedures in place to prevent the deployment of 17-year-olds. And the Army already believes it is important to have potential soldiers meet recruiters before they turn 17.