With the option of going to school for free and getting technical job training for free, who would you hire? Adding to your resume all these things looks better than just a degree with no experience. Contact @ssgt_rangel @ssgtmuro @ssgt_joseph_salas @leo_tibuni to find out more!!! #elpaso #ep #college #educate #educated #resume #usmc #marines #itsallgoodep #money #tuition #tuitionassistance

We bleed together, sweat together, and shed tears together..... This brotherhood is for life! We will all go on and live our lives but the brotherhood will keep us united until the end! "It's not about you! Your are someones Angel they just don't know it yet!"

If you think you have what it takes to become one of the few and the proud contact one of us!!!

Lead, follow, or get out of the way. We all started at the bottom and worked our way up, we took that challenge, met it face-to-face and conquered all obstacles and evil. When will you step out of your comfort zone and stand for what is right.

#Repost @ssgt_rangel (@get_repost)
・・・
It may seem strange, it may seem unconventional , but there is a method to our madness!

If you have a fighting spirit, you might have what it takes.

Play an instrument? Want to be a professional musician while serving your country and traveling the world?

Play an instrument? Want to be a professional musician while serving your country and traveling the world?

#Repost @ssgt_lucio_reyes (@get_repost)
・・・
We are the few and proud with reason!!! The Marines don't lower standards, we hold on dearly to our culture and heritage. Marines know their core values and live by them. Honor, Courage, Commitment! To be us you must be willing to give the America people what they deserve! It's not about you, we all have a calling. Are you ready to be someone's angel!! #suncitymarines
#elpasoproud
#suncity
#usmc
#usmarines
#marinecorps
#thefewtheproud
#elpasotx
#elpasotexas
#epfitnessresler
#elpaso915
#915
#915elpaso

#Repost @ssgt_lucio_reyes (@get_repost)
・・・
If you have heard my "Mexican Fighting bull" story you know the meaning behind this. This isn't just a picture, it's an attitude, drive, dedication...when life hits you will you give up or square up!! What legacy will you leave behind. Congratulations to @grandepapijohn for have the heart and the "Mexican fight bull!" #mexicanfightingbull
#suncitymarines
#giveuporsquare
#legacy

"Some people spend an entire lifetime wondering if they made a difference in the world. But, the Marines don't have that problem." - Ronald Reagan

#Repost @ssgt_lucio_reyes (@get_repost)
・・・
Strength through adversity. The strongest steel is forged by the fires of hell. It is pounded and struck repeatedly before it’s plunged back into the molten fire. The fire gives it power and flexibility, and the blows give it strength. Those two things make the metal pliable and able to withstand every battle it’s called upon to fight. That's why Marine Corps Recruit Depot is the way it is.
#suncitymarines

"Sheep, wolves, and sheepdogs." The sheep go through life refusing to see evil. The wolves are the evil preying on the sheep. But the sheepdogs? They protect the sheep. They fight the evil.

It takes men of GREAT character to walk in our shoes... to find the spirit that our great ancestral once held marching for days to find peace. When will you step up and be the David the world needs!

Are you applying for scholarships? Well the NROTC Scholarship deadline is around the corner. October 6th to be exact!! Just by applying doesn't mean you are committed to the Marine Corps! Here's a couple of scenarios: (1) you apply and you don't win AND you go on to college on your own dime never committing to the Marine Corps (2) You apply. Win the scholarship and you DONT accept the money. you do what you want to do with your future. Never committing anything to the Marine Corps. (3) You apply and win. You go to college on the scholarship and when you receive your bachelors in whatever you want to major in you then become a Marine a Corps officer for 4 years. (4) win the scholarship, go to college and drop out? As long as you don't go past your freshman year you don't owe anything!! With all that being said, why would you close the door on an option? @suncitymarines

Are You Up to the Challenge?

Over the next year these young men and women will ship off to boot camp to begin a 13-week journey that will push their mental and physical capabilities. Upon graduation they will join one of the world's finest military organizations. They will be United States Marines!

Technology at its finest.

A Marine Sergeant wrote this in response to an army guy who posted a comment on a Marine Corps site that he was sick and tired of "Marine Arrogance."

"I think that's what makes Marines special, if only in our own minds, is that elusive Quality of Esprit de Corps. It's the fact that we, as individual Marines, don't feel that we are individual Marines. When we wear our uniform, when we hear our Hymn, when we go into battle, we are going with every other Marine who ever wore the uniform.

Like real brothers, their blood courses through our veins, and when we go into battle, we would rather lay down our lives than be a disappointment to them. We carry on our backs their legacy, their deaths, and their honor. We carry that for the rest of our lives.

It's why, no matter where we are in the world, on November 10th, every Marine celebrates the Marine Corps birthday. It's why we'll never be an army of 1. It's why we never stop being Marines. It's why, for most of us, being a Marine isn't something we were. It's something we are.

It's the most important part of who and what we are. Some say we're arrogant. We say we're proud. We have a right to be proud. We are the United States Marines, the most feared and ferocious group of warriors to walk the face of this earth.

When America's enemies formulate their battle plans, they plan on going around Marine units because they know Damn well that they can't go through them. We are what other branches wish they were.

We are the modern day Spartans. This isn't bragging. It's written in the battle history of our country. When there's a parade and the Marines march by, everyone pays a little more attention. Some say, "arrogance." We call it "pride." It's why, in a crowd of servicemen, you can always spot the Marine. Why are Marines special? I don't know. We just are.

Courage, endurance and integrity are traits shared by all Marines, regardless of gender. The strenuous trials of Marine Corps Recruit Training show no discrimination. For more than 60 years, females in the Marine Corps have shown their mettle and met the challenges in front of them. Your path is rigorous. Your determination must be unflinching. Your reward will be to stand should to shoulder with the finest and say, "I am a Marine." Southwest Marines

Today the Sun City Marines family sends these two hard charging and challenge seeking motivators to recruit training. Although they are smiling they know his journey won't come easy. Have fun @johnalarconfit_ and @_sammmiee, It's your time to earn the title of United States Marine. #futuremarines #marines #usmc #semperfidelis #alwaysfaithful #southwestmarines #SUNCITYMARINES #elpaso

SEMPER FIDELIS!! Training like our brothers life depends on it. #marines #brotherhood #elpaso

There are Few with the fighting spirit to face down fear, self-doubt and weakness.

Will you be among them?

Welcome Fernie Acosta to the Sun City Marines family!! It's been a bumpy road to get him to this point, but the best things in life aren't always easy!! #marines #usmc #futuremarine #elpaso #persistence #socorrobulldogs #southwestmarines #SUNCITYMARINES

Stop limiting yourself. Stop giving excuses and attitudes. Your body can do more than you think it can do. YOU set your own limits!

The time has finally come for Christian Macias to being his 13 week journey of becoming a United States Marine!! Upon completion of recruit training he will go to Marine Combat Training and then communications school. After his training is complete he will come back to El Paso to be a reservist and attend school at UTEP.

MOTIVATION!! We will never give you anything. You have to EARN everything in our Corps!

Be the first to know and let us send you an email when SUN CITY MARINES posts news and promotions. Your email address will not be used for any other purpose, and you can unsubscribe at any time.

#Repost @ssgt_rangel (@get_repost) ・・・ It may seem strange, it may seem unconventional , but there is a method to our madness! #suncitymarines #itsallgoodep #elpasoproud 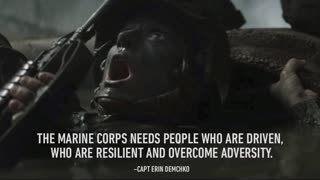 If you have a fighting spirit, you might have what it takes.

Are You Up to the Challenge?

Over the next year these young men and women will ship off to boot camp to begin a 13-week journey that will push their mental and physical capabilities. Upon graduation they will join one of the world's finest military organizations. They will be United States Marines!

Courage, endurance and integrity are traits shared by all Marines, regardless of gender. The strenuous trials of Marine Corps Recruit Training show no discrimination. For more than 60 years, females in the Marine Corps have shown their mettle and met the challenges in front of them. Your path is rigorous. Your determination must be unflinching. Your reward will be to stand should to shoulder with the finest and say, "I am a Marine." Southwest Marines

Why are Marines the best? Watch this.

Why are Marines the best? Watch this.

Striving for success without hard work is like trying to harvest where you haven't planted. Follow your heart. Even if it means you'll stand alone for a while, follow your heart. Victory tastes a bit sweeter when people that doubted you become your biggest fans and when your idols become your rivals! #besomebody #usmc #marines

High Mobility Artillery Rocket System (HIMARS) live fire. Marines in the Reserve here in El Paso fire these rockets along with the other jobs available in the reserves. These Marines maintain civilian commitments but are ready to support the Marine Corps in major combat assignments, humanitarian efforts and national emergencies. They must live up to the same standards as all Marines. Reserve Marines go through the same 12 weeks of Recruit Training, work in the same Military Occupational Specialties as active-duty Marines, and are required to meet nearly identical eligibility requirements. Marine Reserve units are often located near your home or school. The benefits: Training with full pay one weekend per month and two weeks per year. Guaranteed Military Occupational Specialty (MOS) at time of enlistment. Advanced MOS training and leadership opportunities that will help you in all aspects of your life, including your civilian career. The same recruit training and formal schooling as active-duty Marines. For those of you that don't know I'm a reservist on active duty until I augment to the active forces. #marines #usmc #reserves #HIMARS #ELPASO