From all of us to all of you!

We had the opportunity to be part of another great El Paso event.

We had the Megalodon Sponsorship Level!!

Congratulations to all the participants!

We fell in love... her name is El Paso. Look at those city lights!

Hello El Paso Friends! We are proud to announce that we are helping Kaylah reach her goal. She is a great, dedicated and very competitive swimmer.

how do I register to vote - Google Search

Are you registered to vote?

If not, here is a helpful link!

Remember every vote counts, make yours!

We are looking for you!

Hello El Paso Friends!
We are proud to announce that we are helping Kaylah reach her goal. She is a great, dedicated and very competitive swimmer.

On September 11, we remember and we Never Forget…

Please share this with your friends and colleagues , we are taking applications!!! Paid Training. CDL preferred!

Please share this with your friends and colleagues , we are taking applications!!! Paid Training. CDL preferred!

Many things in life can wait, but the sunset in El Paso won’t!
Watch it.
Visit El Paso!

Many things in life can wait, but the sunset in El Paso won’t! Watch it. 🧡

Art in our downtown by the world-renowned Artist Bordalo II


You might have seen El Paso's new 64-foot mountain lion mural on the west wall of the San Jacinto Plaza building. But, did you know the project was completed by the world-renowned artist, Bordalo II, himself? Or, that the mural was constructed from El Paso's own recycled materials and trash? 🎨 ♻️

Bordalo II was drawn to El Paso through the Green Hope Project's "Trash to Treasure" recycled material annual art competition. The mural is now part of his series titled Big Trash Animals. We are proud and honored to display such a positive artistic expression in our city. This is the first installation for Bordalo II in Texas and there are fewer than fifteen in the United States.

Please share this with your friends and colleagues , we are taking applications!!! Paid Training. CDL preffered!

Art in our Downtown!

Please share this with your friends and colleagues , we are taking applications!!! Paid Training. CDL preffered! Always in our hearts! We have driver positions available! 

Congratulations to Ivan Melendez! Now part of the Arizona Diamondbacks!

El Paso's Ivan Melendez was drafted by Arizona Diamondbacks in second round and was the 43rd overall pick.

Thank you for the invite!

Celebrataties like Tim Hardaway, Sr. and Krystall Poppin where to bring smiles to the children.

Our friend Liliana de Castro featured in the UTEP CHS. She owns and operates Hooves of Hope El Paso a great program!

CHS Miners, check out this story excerpt about Hooves of Hope, a local nonprofit started by PT student Liliana De Castro and her family that provides therapeutic riding services for children with special needs (entire story is online at chs.utep.edu). Photo courtesy of Liliana De Castro.
###
PT student Liliana De Castro began her academic career believing she would pursue a career as a veterinarian. The former equestrian athlete began showing competitively at the age of 10. In high school, her plan was to ride for a university equestrian team while pursuing her degree. She applied to Oklahoma State University, ranked among the top in the nation for equestrian programs, and was accepted.

In De Castro’s senior year of high school, the NCAA decided to eliminate equestrian teams, and as a result, Oklahoma State was not able to assure her of her athletic scholarship. Challenged by the high out-of-state tuition rate, De Castro made the difficult decision to stay in the El Paso area.

While De Castro contemplated her next steps, her father began looking for options that would allow her to continue to work with horses, and ultimately suggested going to a national conference on therapeutic horsemanship hosted by PATH International. In 2016, De Castro became a certified therapeutic riding instructor (CTRI). She also changed her undergraduate degree from animal science at New Mexico State University to Kinesiology, with a minor in Speech-Language Pathology, at UTEP. Shortly thereafter, De Castro and her family established Hooves of Hope, a nonprofit serving children with special needs and their families. With four horses and a crew of volunteers from the UTEP OT and PT Programs, the agency reached out to the local community through their Facebook platform, and began serving between five and 10 clients once per week on Saturdays.

“The children loved it; it was what they would look forward to on the weekend, and it was very rewarding to me,” De Castro said.

Watching the PT students with the clients, De Castro realized she could do more than what she was doing as a CTRI, and she decided to pursue a career in physical therapy. UTEP Physical Therapy


Join us this Wednesday, June 8th, for the unveiling of our newest LIFT Buses! The unveiling ceremony will take place from 11-12 pm at the Transit Operations Center located at 10151 Montana Ave!

Rodriguez attended Horizon as a freshman in 2018 and is the youngest victim of the 23 killed: https://bit.ly/3PZD2Y3

Unfortunate news in our state! We love Texas! We love El Paso!!!

Pray for Uvalde! We are Texas, we are united!!!

The streets of El Paso!


When was the last time you explored the city streets of El Paso? In honor of , we invite you to have some fun downtown and search for cool landmarks. Let us know what you find in the comments! 👇

Specially to the mothers in our staff and the mothers that we serve! Have a great blessed day!

Be the first to know and let us send you an email when viba Transportation posts news and promotions. Your email address will not be used for any other purpose, and you can unsubscribe at any time.

Send a message to viba Transportation: 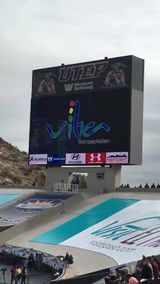 Other Public Services in El Paso

Other Public Services in El Paso (show all)