Native Tribes thought to have been active in the Middletown area; The Piedmont Siouans, Catawbas, S

We are the remnants of a people long forgotten, the last Native Americans of the Shenandoah Valley. Located in the stunning Shenandoah Valley, a short distance from Washington,DC, on the South Fork of the Shenandoah is a flowing mountain river long recognized as one of the premier in the east. Let this page serve as a way to preserve the memory of my people, let this guide and inform on all native american and particularly virginian history and future.

Never forget the struggle of the forgotten

“Soooo you mean to tell me that someone down your ancestry line survived being chained to other human bodies for several months in the bottom of a disease-infested ship during the Middle Passage, lost their language, customs and traditions, picked up the English language as best they could while working free of charge from sun up to sun down as they watched babies sold from out of their arms and women r***d by ruthless slave owners.

Took names with no last names, no birth certificates, no heritage of any kind, braved the Underground Railroad, survived the Civil War to enter into sharecropping... Learned to read and write out of sheer will and determination, faced the burning crosses of the K*K, everted their eyes at the black bodies swinging from ropes hung on trees...

Fought in World Wars as soldiers only to return to America as boys, marched in Birmingham, hosed in Selma, jailed in Wilmington, assassinated in Memphis, segregated in the South, ghettoed in the North, ignored in history books, stereotyped in Hollywood...

and in spite of it all, someone in your family line endured every era to make sure you would get here, but you receive one rejection, face one obstacle, lose one friend, get overlooked, and you want to quit?

How dare you entertain the very thought of quitting. People, you will never know survived from generation to generation so you could succeed. Don’t you dare let them down!

It is NOT in our DNA to quit!” 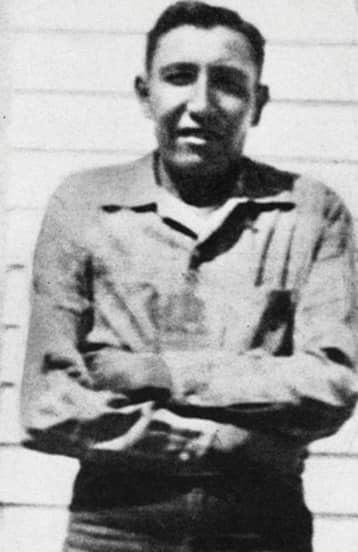 The man who caused the American Indian Movement to gain national and worldwide attention was an Indian cowboy from Pine Ridge. His name was Raymond Yellow Thunder and we should never forget his name or the abuses his murder revealed.

In 1972, Native rancher, Raymond Yellow Thunder, was attacked by racists, stripped from the waist down, and forced into an American Legion bar where people made fun of him, forced him to dance, and had lit ci******es put out on him. Raymond Yellow Thunder was castrated, his skull was crushed with a tire iron and he was tortured.

On a cold winter evening in 1972, four young, restless white men and one woman were drinking beer and cruising the streets of Gordon, Nebraska, when they came upon an intoxicated Oglala Lakota ranch hand named Raymond Yellow Thunder.

They grabbed him by the hair, punched him in the face, stripped him from the waist down, and forced him into the trunk of their car. They thought it would be a great joke to shove him half-naked into the American Legion Hall, where a benefit dance was underway.
The townspeople stared in shock as the bruised Indian cowboy in the doorway pulled his shirttail down to cover himself and hid his face in shame. They took him outside to beat him to death. They put him in a trunk of their car and drove around. Then they put him into the cab of a pickup truck in a used car lot where he died. Two little boys found his body a week later. He had died of a cerebral hemorrhage.

His death became notable as an example of a racial assault, as he was murdered by four white men who had bragged earlier that evening about beating an Indian.

The murders received a light sentence. Leslie and Melvin Hare were eventually convicted of manslaughter and sentenced to six years with a $500 fine, and two years with a $500 fine, respectively.
The authorities were not going to charge anybody at first. But after a protest by a caravan of AIM people and people from Pine Ridge, the Hare brothers were charged. They were convicted and sentenced to a year in prison. The local Indian leaders called on AIM to come in to help protect them.

The AIM protests over Raymond’s killing and the killing of Wesley Bad Heart Bull led directly to the Indian occupation of Wounded Knee in February 1973. AIM later established the Yellow Thunder Camp in Raymond’s honor.

The signs in stores, bars, and restaurants that said “No Dogs or Indians Allowed” had just started to come down by then.
Raymond Yellow Thunder was born near Kyle on the Pine Ridge Reservation. He was a direct descendant of American Horse, a chief who believed strongly that education and hard work was the best way for the Lakota peoples to advance. Raymond’s parents, Andrew and Jennie felt the same, and they maintained a farm and a small herd of horses. His life was in many ways typical of that era.

Why We Eat: Pozole

Why We Eat: Pozole

Earliest known Tattoo tools ever found ,
from a site on then eastern starboard

Sharpened turkey leg bones may have served as tattoo needles between 5,520 and 3,620 years ago, at least a millennium earlier than previously thought.

A snapping turtle just after emerging from ”hibernating”, buried in the mud. This is where the Native American legends of the Earth being brought into existence and carried on the shell of a turtle originated from. - Reddit | iangoren98

The Yurok Tribe reclaims its ancestral territory in Northern California.

Have you seen the incredible new Netflix programme 'Seaspiracy'? It is a very strong documentary on fishing that everyone should watch.

See that state in the red there? The one in Mexico? That is Puebla. The state where a great victory was won on May 5, 1862. You see, the French thought they had it made, that a swift takeover was imminent based on their army of 6000 soldiers. They were wrong. An army of INDIGENOUS folks gathered to fight back. On May 5, (yes that means Cinco de Mayo) the French sent troops in to attack the city of Puebla de Los Angeles, but were met from the North by the indigenos who would not be intimidated or taken down. When the fight was over and the French retreated, they had lost over 500 men. Puebla lost less than 100.
Cinco de Mayo isn't a day to get wasted and dress up as a racist stereotype. This day is a celebration to remember the Indigenous Resistance that took place, and the victory that seemed impossible. Indigenous resistance continues to this day, from the top of turtle island to the tip of South America. We fight imperialism and colonialism with pride. Please do not trivialize the important celebration of La Batalla De Puebla by reinforcing racist tropes. And don't you dare tell Mexicans "Happy Mexican Independence Day!" you'll look like an ignorant jackass.

Lamprey Eels at Willamette Falls - 1913. Lamprey eels are actually a fish, not an eel. Older than salmon, they also migrate to the ocean and return to Northwest rivers to spawn.
They climb the rocks using their sucker mouth to inch up the steep face. Now even more endangered than salmon, they are still harvested in a few places by Native Americans, including Willamette Falls.
This photo from a century ago gives us an idea of how many there used to be.
https://www.oldoregonphotos.com/lamprey-eels-at-willamette-falls-1913.html

The four leggeds came before the two leggeds. They are our older brother, we came from them. Before them, we were the root people. We came from them. We are the same thing. That is why we are spiritually related to them. We call them in our language “Tatanka,” which means “He Who Owns Us.” We cannot say that we own the buffalo because he owns us.
Birgil Kills Straight. Oglala Lakota.

Merkabah, also spelled Merkaba, is the divine light vehicle allegedly used by ascended masters to connect with and reach those in tune with the higher realms. "Mer" means Light. "Ka" means Spirit. "Ba" means Body. Mer-Ka-Ba means the spirit/body surrounded by counter-rotating fields of light, (wheels within wheels), spirals of energy as in DNA, which transports spirit/body from one dimension to another.

Here are the indigenous names, origins and meanings of most of the Caribbean countries .

An Eagle’s eye view of a prehistoric stone row that leads to a stone circle in Dartmoor.
➖➖➖➖➖➖➖➖
📸 By

You may be tough, but are you - Sleep in a log, kill a deer, hack off a hind leg, cook it over a campfire, eat it with a pocketknife - tough?

The discovery that the platypus grows suggests mammals could have evolved fluorescent fur more than 150 million years ago.

This is a groundbreaking appointment.

Iñupiaq TikToker is Educating Others About Her Native Community

Iñupiaq TikToker is Educating Others About Her Native Community

Hidden away in the mountains in between the much more popular megalithic sites of Saqsaywayman & Machu Picchu lies the lesser known Tarawasi (Tarahuasi) site which features this polygonal mortarless wall - one of the greatest in all of Peru.
➖➖➖➖➖➖➖➖➖
📷 by

6 Indigenous Metal Bands You Need to Know About

6 Indigenous Metal Bands You Need to Know About

In celebration of Indigenous People's Day in the United States, here are six indigenous metal bands that you need to check out right now.

These mathematicians think the universe may be conscious

These mathematicians think the universe may be conscious

Needless to say, not everyone's convinced.

Be the first to know and let us send you an email when The Indigenous Vibe Tribes posts news and promotions. Your email address will not be used for any other purpose, and you can unsubscribe at any time.

Other Government Organizations in Fairfax

We are now just 2 weeks away from this the historic visit by and from . THERE ARE 2 WAYS TO : a at Mt Rogers and a at the Peace Pentagon. See our for details. We also need to raise funds to pay for this visit - so PLEASE today - at Facebook or at our website – and join us for this once-in-a-lifetime event!
x

Other Government Organizations in Fairfax (show all)