Soldiers are our strength and our purpose. Since the terrorist attacks on Sept. 11, 2001, our Army has been operating in many challenging environments.

If you are going to have a blast this weekend, you might want to wear one of these first...

: in 1880, Douglas MacArthur was born in Little Rock, AK. he served as General of the Army for the United States, as well as a field marshal to the Philippine Army?

MacArthur was nominated for the Medal of Honor three times, and received it for his service in the Philippines campaign. He died in 1964.

We had a great time last week at the Garden State Outdoor Sports Show in Edison, NJ. We showcased the Army's current and next generation weapon platforms.

: You might be cold, but probably not as cold as Zack Catron, communication specialist for Project Manager Soldier Survivability, snapping pics of the new cold weather clothing system during an Arctic Airborne test at Fort Greely, AK.

A Soldier conducts a simulated patrol during training at Schofield Barracks, Hawaii, Nov. 3, 2022.

Great shot of the M17 MHS, part of the PEO Soldier portfolio. For more info, go to bit.ly/PM_SL.

U.S. Army Soldiers and members of the KATUSA Soldier Program conduct an M17 range on Camp Casey South Korea, Dec. 18, 2022. The SIG Sauer M17 is a service pistol derived from the SIG Sauer P320 in use with the United States Armed Forces.

In the 1936 short "In the Army Now," Popeye and Bluto attempt to enlist in the Army, but instead get in a fight in the recruiting office. Popeye wins and forgets to sign the papers before leaving.

"Life’s most persistent and urgent question is, ‘What are you doing for others?’“ -

The theme of the day, “A Day On, Not a Day Off,” encourages individuals to dedicate the day to community service in remembrance of Dr. King’s remarkable legacy and to commit ourselves to instilling his principles of unity and equity throughout the world.

that January is ? You might not have a Military Working Dog, but we can all agree they are the absolute best boys and girls around.

: On Thursday of last week, the U.S. Army announced that it had awarded a “task order” to Microsoft to develop the 1.2 variant of the Integrated Visual Augmentation System.

To date, the Army has conducted over 30 Soldier test events and more than 100 technical sub-tests with more than 1,000 Soldiers contributing nearly 100,000 hours of user feedback for IVAS. These tests validated the system’s continued progress while providing areas for focused improvements.

January is also . Have you checked our current list of approved eyewear for the U.S. Army? Check out the Authorized Protective Eyewear List at bit.ly/PEO_Eyewear.

Soldier of the future to be fielded by RIA-JMTC

Currently, thousands of IVAS systems are on ground in RIA-JMTC’s staging facility, in preparation for fielding. The Army anticipates procuring up to 121,500 units for close-combat forces over the coming years.

Read more at the link from Army.mil.

ROCK ISLAND ARSENAL, Ill. — What formerly belonged to the realm of science fiction has become reality for Soldiers, with advances enabling them to fight...

Today is : What about saving some? the Universal Battery Charger (UBC) supports the most common lithium ion batteries in use including the BB-2590, AN-PRC 148/163/154, CWBs, and USB 2.0 devices?

PEO Soldier staff attended the National Future Farmers of America convention in Indianapolis, IN, to highlight a variety of PEO Soldier products, including the Modular Scalable Vest, IHPS helmet, and IVAS.

: We have looked back and selected our ten favorite pictures and moments of #2022 at PEO Soldier.

: New Year, New Goals. What are your goals for 2023? What do you want to see PEO Soldier highlight this year on social media?

Be the first to know and let us send you an email when PEO Soldier posts news and promotions. Your email address will not be used for any other purpose, and you can unsubscribe at any time.

Send a message to PEO Soldier:

Thank you for joining us today for a panel discussion with Col. Maritza Lagares, Staff Sgt. Raquel Flores and Mr. Hamilton Lopezcruz in recognition of Hispanic Heritage Month. This month and every month, we celebrate the Army’s diversity as one of its greatest strengths. As you listen in, please invite your friends to join the conversation and post any questions you have for panelists here in the chat.

Thank you for joining our panel, which will share their experiences and successes dealing with suicide and provide guidance to help you or someone you know.

Senior Leaders discuss their responsibilities to equip the future warfighter.

Watch #LIVE as Secretary of Defense Lloyd J. Austin III hosts a ceremony to induct Medal of Honor recipients into the Pentagon's Hall of Heroes.

In October of 2021, the People First Task Force launched the Fusion Directorate Pilot program as part of the planned redesign of the Army Sexual Harassment/Sexual Assault Response and Prevention Program. Forts Bragg, Irwin, Riley and Sill, Schofield Barracks and Aberdeen Proving Ground opened in April of 2022 and are all participating in this one-year pilot of a new concept for delivering response services designed to care for, protect, and empower victims. The 99th Readiness Division –Army Reserve will open a virtual pilot later this year. [🎥: Fort Sill Public Affairs Office] 99th Regional Support Command 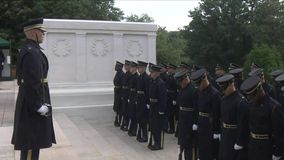 Today, the Army celebrates 247 years of defending our Nation since its establishment on June 14, 1775. Always a ready force, we defend America around the world 24/7 -- past, present and into the future. #ArmyBDay | #AlwaysReady | #Army247

Army IgnitED Townhall with the Sergeant Major of the Army

Join Sgt. Maj. of the Army Michael A. Grinston for a #LIVE update on Tuition Assistance and the Army IgnitED system and ACCESS Director, Col. Julia Bell and Command Sgt. Maj. Faith Alexander from Army University. 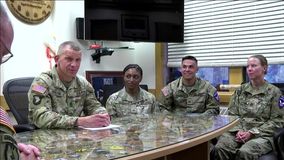 Thank you for watching! 🇺🇸 Join Sgt. Maj. of the Army Michael A. Grinston as he talks to NCOs of the newly activated 11th Airborne Division during this Facebook #LIVE Townhall.

Army Chief of Staff State of the Army Address

#LIVE The U.S. Army Chief of Staff Gen. James C. McConville talks about the present and future direction of the United States Army during the State of the Army address. #WinningMatters | #PeopleFirst Click here for the full program of #AUSA2021 events & speakers: https://army.mil/article/249960?dmd

Join us! 🇺🇸 Find out who is the 2021 Best Warrior Soldier and Noncommisioned Officer of the Year -- and more -- during the Sergeant Major of the Army awards! #AUSA2021 | #BestOfTheBest

Paratroopers of the 82nd Airborne Division's Immediate Response Force prepare personnel and equipment for a deployment to the U. S. Central Command Area of Operations. The Immediate Response Force is charged with remaining ready to answer the Nation’s call to deploy to anywhere in the world at a moments notice. [🎥: 82nd Airborne Division/ U.S. Army] #armystrong

Join the discussion as Army medical leaders talk about the COVID-19 response and vaccination.

Two and a half years after the Emancipation Proclamation, Major General Gordon Granger and his Soldiers traveled to Galveston, Texas, to announce General Order Number 3 on June 19, 1865. The order stated that all slaves were free as outlined in the Proclamation. Happy #Juneteenth as we pause and reflect on what this date represents for us. #armystrong💪 [Video Credit: U.S. Army]

Like and Follow the Army Deputy Chief of Staff, G-6 for stories from the field to the front office of the Signal and Cyber Corps!!! #ArmyStrong

Army women's health experts will discuss the safety of the vaccine and the importance of getting vaccinated. They will also participate in a Q&A with the audience. #PeopleFirst | #COVID19 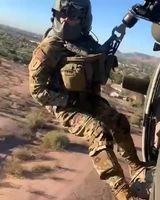 https://www.change.org/p/president-of-the-united-states-sfc-alwyn-cashe-deserves-the-medal-of-honor
It seems like warfighters prefer Tactical NAV to NETT Warrior. 🤷‍♂️
DARPA, you may have mind-controlled employee’s who have inserted chips surgically installed thru the nose and using a eye socket tool. Connected to the brains processor to hijack control. Please investigate for your friend’s and family. Tools that may help suspect or confirm. Facial recognition with eye checks. Pupil larger than the other. Eyes response to light. A ring of red around the iris. Learn the difference and scan the employee database. You may be able to ping them via. signal and see how the brain responds to suspect. Elon and Putin inserting chips for mind control. Elon has a mind-controlled human who produces chips for mind control. Volger. Some sold to DARPA. What is Ridgecrest? Mind control lab? Who is your chip manufacturer? Tell the mind-controlled to fight by biting their finger/fingers at opportune times to help them be known. Cry, watery eyes and to fall down if possible. Blow air out of the eye socket where the soul escapes during decomp. Hold nose and mouth closed and you may blow air out a eye socket. That you can fell the air compress in your brain. They install chips in the air chamber. Soul transferable conscious. A spirit similar to a isotope(memory). Comparable to cellular satellites. 10-5 U-Z - 10-6 +A signal's can connect to your brains internal antenna and monitor the brains decoded wavelength's reading your conscience and emotions using an algorithm and A.I.. That your brain may be able to receive video clips and see thru eyes.
One must truly know their 249 squad automatic weapon, only then can one fire 650-850 rounds per minute…

I have been leaving messages for your PAO for weeks with no return contact. I work at the National Museum of the US Army.
From Afghanistan re; the new IHPS's helmet pads: 9/10/2019:Kits: 30. Hometown: . Heard about us: . Duties: Dismounted Infantry Patrolling. Current pads: 3M Ceradyne SPS IHPS (Hard, Rough, Glued). Comments: Issued pads are hard, with little give, and rough. That combination in 100+ degree heat or under NODs is a constant, annoying distractor when Paratroopers need to focus on the ground and possible threats around them. I've lived through four generations of helmets, and these pads are worse than any that have come before them.. CPT, US Army
Y'ALL GONNA CHECK OUT AIR FORCE SHARK TANK? MIGHT BE SOME TECHNOLOGICAL COLLABS IN THE FUTURE.
https://www.afsbirsttr.af.mil/af-pitch-day/how-to-submit/

MIGHT BE JUST A MATTER OF TIME BEFORE RAPTORS AND APACHES GET LASERS TOO... AND THEN SOMEHOW SOME WAY, ANTI-DRONE INFANTRY UNIT CAN MAYBE GET A PEO LASER TOO?
Can someone help me find the NSN to the SKRAM bag? (Sorry if this question has been asked a million times.)
x