The Squadron bid farewell to some Amazing leaders but also welcomed both new and familiar faces during this Change of Command held on May 4th! To CPT Blakely and CPT Correa, you both did a phenomenal job leading your troops while serving in this Squadron. Both you and your families will be missed. To CPT Wisdom, your position in Executioner was well served and we can’t wait to see you take on HHT as you continue to lead with 6-1. We welcome CPT Diaz Puig , CPT Powers, and CPT Johnson as they take on commanding roles in Apache, Comanche, and Executioner. We can’t wait to see what you have planned for your amazing troopers!

Special thanks to COL. Fairless and CSM Bitle on your attendance at all ceremonies. Your continued support for 6-1 is always appreciated.

Apache’s trooper of the week is SPC Carson Wyatt. This soldier, assigned to the headquarters section, displayed the epitome of resilience and Soldier mindset. SPC Carson created and developed the Apache Troop Geronimo Dungeon (GYM). In doing so, SPC Carson developed standardized workouts and created an area that can be utilized daily towards overall Soldier Physical fitness improvement. This Soldier continues to improve the gym through coordination with outside agencies such as DPW, to paint and stabilize the gym. This instills the espirt-de-corps of the Troop, and displays to the troop what it means to be a Geronimo. SPC Carson conducted this while also managing personal challenges in his life. In that SPC Carson displays exactly what it means to to be a Cavalry Trooper.

Here’s a look into the Squadron’s recent Hero of the weeks!

Horsemen Hero of the Week is SPC Coy Shepard. SPC Shepard assumed the role of Armorer for HHT upon his deployment in support of INDOPACOM operations. SPC Shepard executed both Korean Enduring Equipment Set and Organizational Property inventories as part of the ongoing HHT change of command, while simultaneously supporting the Squadron Operations section in the establishment of the Squadron Main Command Post. SPC Shepard worked tirelessly to ensure the HHT Arms Room prepares for upcoming physical security inspections and has already provided a level of organization within the arms room that far exceeds the product that was inherited during the RIP with his counterpart. SPC Shepard also developed and implemented a new MAL for the HHT arms room to improve efficiency and support EDRE operations and weapons draw procedures for HHT.

Comanche Hero of the Week is SGT Viverosaguilar, Cutbero. This Leader displayed his dedication to the organization by presenting a task oriented CBRN training. He dedicated his time and energy as one of the Subject Matter Experts on CBRN, but balanced his responsibilities as the Training NCO, while preparing property for Change of Command inventories. SGT Viverosaguilar trained SQDN level assets to assist Apache Troop with its execution of this training, meeting the Republic of Korea mentality of “Fight Tonight”. His ability to overcome challenges as a junior Leader allowed the training room, inventories, and CBRN training to succeed IAW with T&EO’s and schedule on time.

Dakota Hero of the Week is PV2 Ordonez, Antonio. This Soldier displayed an impeccable amount of resilience and preparation while supporting the Fight Tonight mentality in his preparation for movement. He has been eager to learn everything he possible can to improve himself as a Soldier. PV2 Ordonez, ensured that the flee for KCTC was fully mission capable (FMC) by ensuring all maintenance issues were resolved and dispatched for movement. He also ensured that all vehicles in the motor pool was equipped and installed with RAWLs lights as well. He impresses his Leadership during PT, Work, and during his personal time as he volunteers with the Hovey CAC. PV2 Ordonez embodies the very essence of a Soldier and continues to adapt and overcome to the situations laid before him.

Blackfoot Troop getting after it with air medevac rehearsals!

We are Ready First!

To Apache’s very own 1LT Swayze, we applaud you on your most recent promotion. Continue your great work ethic!

Special thanks and gratitude to these fellow soldiers for all of there hard work in the Squadron over the years. You all were great assests to not only your individual troops and sections, but to 6-1 Cavalry as a whole! We wish you the best on your newest embarks and endeavors.

Congratulations to the Squadron’s Solider of the Month and NCO of the month for the month of March. PFC Graham and Sergeant Rebiejo. Keep up the good work!

“You gotta live hard to be hard”
- Geronimo 7

Hero of the week. CPL Desouza is the squad leader for 2nd squad in the Diamondback Platoon of Dakota Troop, 6-1 CAV. As a Squad Leader, CPL Desouza is responsible for the readiness, training and morale of 8 Soldiers. He recently completed Drivers packets for his entire platform without anyone asking him to. His leadership mentality has gotten him recognized by DK7 on multiple occasions. He also implemented team building exercises for PRT that helped motivate his platoon. His newly developed counseling template will better assist with the requirements for the manifest checklist. This template should be used across the company. He is a highly motivated natural leader who is admired by his peers and subordinates. His wish is to become a Drill Sergeant and with his hunger and ambition he will become one, no doubt .

Sports and Movie night, Hosted by UMT, Thank you !

The Fort Bliss legal assistance office will have representatives in the HHT COF on Friday morning to assist Troopers with wills and powers of attorney. The tentative time is 0900-1200 but we will update this post if that changes. Please make sure your Trooper stops by for assistance if needed.

In a flashback to December , 6-1 CAV hosted Dragoonville for all of the Squadron’s troopers and their families. It was nothing short of amazing. What a great tim e to get together during the holiday season ! Special thanks to everyone who came and helped make this event possible . Dragoons !

On January 13th, 2022 We bid a heartfelt farewell to a true Dragoon Soldier, CSM Leonardo Salazar. You’ve led side by side with LTC Derrick Murray in all missions and tasks the Squadron faced, but not once did you ever give waver. You mustered the courage to help lead our fellow troopers in the direction of success. You will always have a special place in the heart of the Squadron and will be missed. To CSM Black we welcome you and your family to the Squadron with open arms fully knowing you are capable to assist in leading the Squadron forward. Your motivation shows everyday and we can’t wait to see what you have planned. Dragoons!

Congratulations to CSM Salazar on being awarded the Legion of Merit by COL Stephen A. Fairless. It was truly deserved through your hard work and dedication to not only the Soldiers of this Squadron but also the entire RFCT and US Army, it truly never went unnoticed. DRAGOONS!

On Wednesday January 12, 2022 we bid farewell to another courageous and faithful leader, 1SG Fields of Dakota FST 6-1 CAV and welcomed a new fearless leader 1SG Harrison. 1SG Fields will be missed dearly by the Squadron and we wish you new blessings as you and your wife Pauline embark on a new journey. 1SG Harrison we welcome you to 6-1 CAV and have no doubt you will lead Dakota Troop to success!

Join the 6-1 Leadership, ACS, CYS, Legal, Finance, and Tricare team as we talk about different topics, benefits, and entitlements that Soldiers and their family members should be aware off while deployed in the Republic of Korea.

Be the first to know and let us send you an email when 6th Squadron, 1st Cavalry Regiment posts news and promotions. Your email address will not be used for any other purpose, and you can unsubscribe at any time. 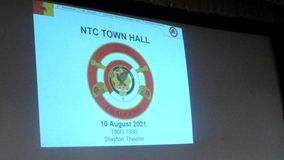 Soldier of the week!

Soldier of the week!

Dragoon Family, Spend a few minutes with the SCO for a weekend update

SCO recognize SPC Jonathan McCullough (A TRP) and talk about the fifth Amendment to the Come to Work Love Safe Order. 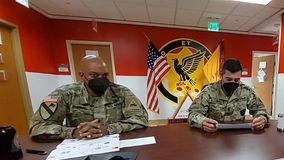 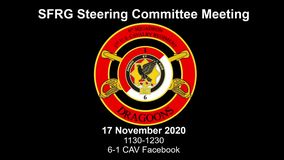