A-Shift setting standards at the Capital tour. Thank you to DGS Fire Safety. 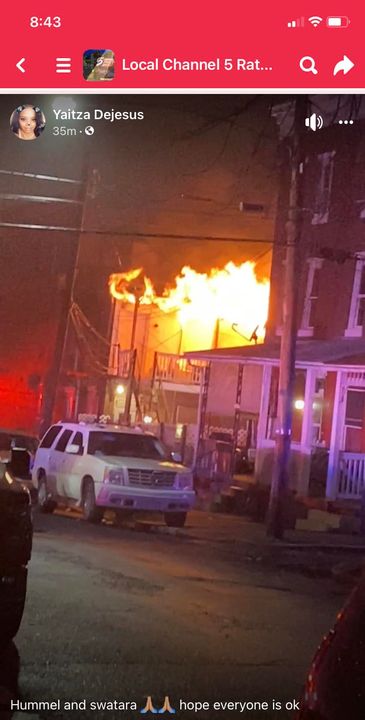 1 Alarm Fire in Allison Hill. BC 7 had fire showing from the rear of two houses. 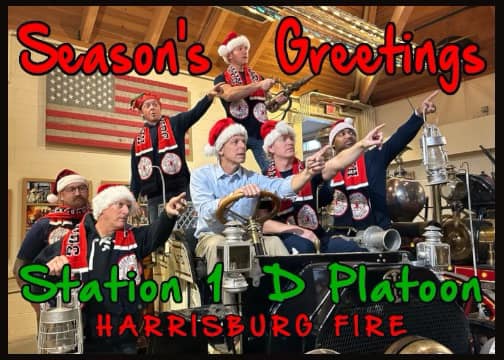 For all of those left wondering how the turkey turned out from the deep fryer demonstration. It. Was. Delicious! 🤌

This Thanksgiving, we want to remind you all to please be careful while you are cooking your Holiday meal.

Remember, if you are deep frying your turkey, make sure it is completely thawed and dry. Be sure to not over fill your oil, or overheat it. Carefully lower the turkey into the pot. Never leave the fryer unattended, and keep a fire extinguisher close by.

Always, keep the fryer away from your deck, homes, and never cook inside your house or garage.

The Harrisburg Bureau of Fire would like to congratulate the following members on their new promotions.

Last night crews operated on a 1st Alarm structure fire on N 17th Street in The Hill District. Crews arrived to find heavy fire showing from the second floor extending to the third. Multiple lines were placed in service making quick work of the fire. B Platoon at work.

Only ONE made the cut in the Uptown

08/30/2022: Rescue 1 has been dispatched and is responding to assist with the building collapse in Guilford Township, Franklin County. The “B” Platoon working.

Units were alerted to the 1000 Block of Garber Road in Guilford Township and are currently on the scene of a Building Collapse. Chief 1, Assistant Chief 1, Tower 1 & Engine 1-1 currently assisting

08/15/2022: At approximately 0148 Hours, Ladder 2 was dispatched to 171 S. Enola Dr. in East Pennsboro Twp., Cumberland County, to assist with the 2nd Alarm Structure Fire. Upon arrival, the crew of L2 was assigned to the Bravo Exposure where fire had extended from the main fire building and into the walls and ceilings of the 1st and 2nd Floors of the Charlie/Delta corner. Efforts were complicated by hoarding conditions. The Crew of L2 was assisted by several other responding companies to include but not limited to YC R69 (DLA), PC 2 (Duncannon), and CC 12 (Lower Allen). L2 operated for approximately 2 1/2 hours before being released from the scene. L2 had also responded to this location approximately one week ago to assist with another fire.

We here at “The Uptown” would like to take this opportunity to correct a GRIEVOUS oversight on our part. This past Sunday, July 31st, was “D” Platoon Wagon 3 Chauffeur Brendon Booz’s birthday and he has made sure that we’ve heard about it everyday since. So, Brother Booz, happy belated birthday. We hope you had a great day.

Currently there are messages going out stating $10 off of Squad 8 shirts, appearing to come from the Squads page. THIS IS NOT REAL. PLEASE DO NOT CLICK IT!! 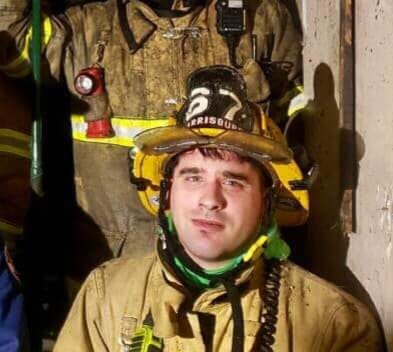 Members of the Fire Bureau would like to thank Mayor Williams and the City of Harrisburg for providing everyone lunch. We greatly appreciate the appreciation showed. The food was delicious!

Members of the HFD dragging the field during the 3rd and 6th innings. Of course, we have Hill Fire Pup Jake making sure everyone and everything was in line. He's a good Pup!

Fun Day with the Harrisburg Senators for Public Safety Day! Thank you for the hospitality! Congratulations on the win over Erie!

07/01/2022: The “A” Platoon is currently operating on the 1st Alarm structure fire at 1248 Kittatinny St. (Box 1-4) in “Allison Hill”. Multiple calls were received reporting smoke and fire. Squad 8 arrived on scene with heavy fire showing from the rear of a duplex.

Come on out and help support The PA National Fire Museum on Friday July 8th, 2022 starting at 4:00 PM.

***WORKING FIRE*** Crews are currently operating on a working auto shop garage fire in the 2300 block of 7th Street in the Uptown. Crews have been defensive operations since arrival as heavy fire was evident throughout upon arrival. 1st Alarm has been struck. Master stream operations and large lines are in use. A Platoon at work.

The “C” Platoon is currently operating on a 2nd Alarm structure fire in the are of S. 14th St. and Berryhill St. (Box 1-4) in “South Allison Hill.” Dispatch initially advised that callers were reporting two houses on fire in the middle of the row. First arriving units reported that the fire was running the row. After an aggressive initial attack, units were evacuated to establish defensive operations and regroup.

Earlier this month The “A-Platoon” plucked this little guy out of the Susquehanna River right as he gave up the fight trying to doggy paddle his last little bit of energy. Today we saw our friend Bear out and about at Artsfest in Downtown Harrisburg healthy and with a fresh cut! 🐕‍🦺

**WORKING FIRE** Crews are clearing a 1st Alarm fire in an apartment building in the Downtown district. Crews arrived finding a working fire in an apartment on the fourth floor. Wagon 4 and the Squad crews worked on fire attack while Truck 2 and Tower 1 crews worked on search and rescue. Several occupants were assisted through the smokey hallways to the stairwells with the use of the truck crews breathing apparatus. Wagon 3, Truck 32, CC Air 13, and YC Rescue 69 responded fulfilling the 1st Alarm box. B Platoon at work, Chief 5 (Lloyd) in command.

Online patch sales are closed. An announcement will be made when there are more available. We thank you all for your support.

On May 24, 2022 - units were dispatched after receiving multiple calls reporting a structure fire. Units arrived on scene to a fire that had spread to multip...

**Currently** Working fire in the Uptown, 2400 block of Reel Street. Middle of the row. D Platoon at work.

The NEW Uptown patch is complete and in! Thanks for the hard work to those involved.

They will be for sale at The Allison this Friday for the fundraiser.

To ship, price including shipping is $10. If requesting shipping, please message the page. Currently working on options for payment.

Patch stickers are expected in soon and will be for sale as well.

Be the first to know and let us send you an email when Harrisburg Bureau of Fire Station 1 "The Uptown" posts news and promotions. Your email address will not be used for any other purpose, and you can unsubscribe at any time. 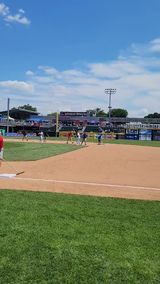 Members of the HFD dragging the field during the 3rd and 6th innings. Of course, we have Hill Fire Pup Jake making sure everyone and everything was in line. He's a good Pup!

A short video of C platoons fire in the 1600blk of Paxton Street today. Fire in two burned out Vacants. Video credit-Batt 5!

A Bald Eagle and a Hawk having a stare down in “The Uptown” at Delaware St. and Wallace St. between N. 6th St. and N. 7th St. 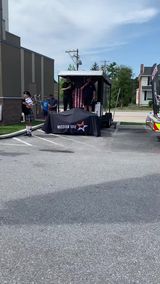 Shoutout to Delta Truck 2 Driver 1 Briggs on his wonderful rendition of The National Anthem this morning. 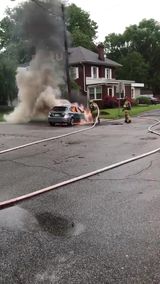 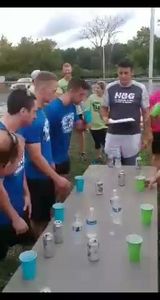 Other Public Services in Harrisburg

1st Alarm: Units are going to work the 500 Block of Maclay Street for an apartment fire. One victim rescued from the second floor. Crews are still operating. A Platoon at work.
Video of B Platoons structure fire last week in The Uptown. Tiller cab view of what FF Paul gets to see as well as Chief 5's (Lloyd) video combined with it.

https://youtu.be/uWMzl38ZSUI
Ladder 2 and Squad 8 assisting the West Shore Bureau of Fire last night.
This morning crews were sent to the 3100 block of Green Street for a reported structure fire. County advised a 2nd floor bathroom was on fire. Crews arrived to find smoke in the street. Crews found the fire to be in the walls on the second and third floor. Quick work was made of the fire with multiple lines being stretched. The fire went to the first alarm. No civilian or firefighter injuries reported. B Platoon working.
Come out to Twin Ponds East this evening at 6pm and support your local firefighters and Law enforcement officers! $10 donation at the door.
02/16/2922: The “C” Platoon at work on Paxton St.
A short video of C platoons fire in the 1600blk of Paxton Street today. Fire in two burned out Vacants. Video credit-Batt 5!
02/16/2022: At approximately 1139 Hours, Squad 8, Tower 1, Wagon 4, Ladder 2, and Battalion Chief 4 were dispatched to the area of S. 17th St. and Paxton St. (Box 1-5) in “South Allison Hill” for a reported structure fire. Dispatch advised that they were receiving multiple calls as P. D. arrived on scene confirming a working fire to the rear of the 2 1/2 story duplex causing exposure problems. B/C 4 requested the 1st Alarm (Wagon 3, DC Tower 32, YC Rescue 69 (DLA), and CC Air 13). Due to a previous fire at this address leaving both sides of the duplex structurally unsound, defensive operations were initiated immediately on arrival. Wagon 4 led off with a blitz attack using their deck gun, knocking down the bulk of the fire. The aerial master stream from Tower 1 and hand lines from Squad 8 and Wagon 4 extinguished the remaining fire with minimal damage to neighboring exposures. Units operated for approximately 1 1/2 hours. The “C” Platoon working.

Other Public Services in Harrisburg (show all)