To promote, support and implement educational, cultural, social, and economic programs to serve the disadvantaged and underprivileged people.

Farewell Party for Keanna Qarooni, our Part-time Program Assistant in the Afghan Refugee Resettlement Program for the past 3 months before returning to her medical studies at Johns Hopkins. Thank you and good luck with your study!

The Central PA Region has a history of welcoming refugees.
https://www.pennlive.com/news/2021/12/her-family-survived-the-holocaust-now-a-rabbi-shelters-afghan-refugees-to-pay-forward-the-kindness-of-strangers.html

Please see below for the Refugee Wish List. Thank you in advance for your kind consideration.

“A very special THANK YOU to GIANT FOODS for their generous donation to International Service Center in form of Gift Cards for the incoming Afghan Refugees! The ISC family is very grateful for your support and your kindness is not left unnoticed. Giant Food

August 2021 has been a very intense and hectic month for the International Service Center (ISC) as the heartbreaking events in Afghanistan and consequences of the U.S. troop withdrawal have unfolded. The security risk for Afghan Allies who assisted the U.S. mission in Afghanistan and their loved ones, became a heightened priority, made even more urgent by the Taliban takeover of the country on August 15. Within two weeks, the U.S. government had managed to safely evacuate more than 120,000 U.S. Citizens and Afghan nationals out of Kabul Airport to various U.S. military bases around the world. The vast majority of the evacuees are former U.S. allies and their immediate relatives whose lives would have been in grave danger under Afghanistan's new rulers.

As of September 15, more than 23,000 Afghan refugees have arrived in the U.S. through Washington-DC and Philadelphia airports, and are being temporarily housed at eight military bases in Indiana, New Jersey, New Mexico, Virginia, and Wisconsin. There, they will undergo a strenuous vetting process, prior to being connected with their U.S. relatives or resettlement agencies for placement into designated communities across America.

Hundreds of personnel from the U.S. Department of Homeland Security, Department of State, and Department of Defense continued to process and screen Afghan evacuees at U.S. military bases overseas including Bahrain, Germany, Kuwait, Italy, Qatar, Spain, and the United Arab Emirates. Their ultimate goal was to bring to the United States Afghan nationals who had worked for the U.S. during the 20-year war, as well as other vulnerable Afghans. By the end of September, the U.S. government had relocated nearly 60,000 Afghans to the United States, with about 30,000 more expected to arrive over the next 12 months.

Since the beginning of August, the Executive Director of the International Service Center (ISC) and a small group of volunteers has been working feverishly to try to address the needs of desperate Afghan clients rushing to the ISC for assistance. Most of the Afghan immigrants who came to the U.S. in the past few years under the Operation Allies Welcome are Special Immigrant Visa (SIV) holders, for having worked side-by-side with the U.S. Armed Forces in Afghanistan. Their relatives left behind in Afghanistan would suffer horrible retaliation from the Taliban. Responding to the appeal for assistance from local Afghan immigrants who were extremely concerned for the safety of their relatives in Afghanistan since the Taliban takeover, the ISC has initiated the Afghan Family Reunification (AFR) Project on September 1, 2021. The main purpose of the Project was to help at-risk people still stranded in Afghanistan reunite with their relatives in the United States, and to help ease their transition once they get here.
Considering the constantly deteriorating situation in Afghanistan and the imminent arrivals of Afghan refugees in our community, we are afraid that with our presently limited resources, we will not be able to achieve the goal we have established for this special Project. We began developing additional resources, while trying to recruit more partners in mission. With the strong support of the Pennsylvania Refugee Resettlement Office (PA-RRP), on November 9, 2021, we became a local affiliate of the national Voluntary Agency, the Ethiopian Community Development Council (ECDC) with headquarters in Arlington, Virginia. On behalf of this highly-respected refugee resettlement agency, we began resettling Afghan refugees under the Afghan Placement Assistance (APA) Program. As the first Afghan refugee family of 11 people, ranging in age from 17 month-old to 57 year-old arrived in Harrisburg, we realized that we need more assistance than ever.

There are several ways you could assist us in this Afghan refugee resettlement effort.

1. You could donate any of the items listed on the attached Refugee's Wish List and Preferred Foods. Donations could be delivered at our door on 21 South River Street, Harrisburg, PA 17101. This address is actually the back door of the Market Square Presbyterian Church, from where the International Service Center has been serving refugees and immigrants for the past 45 years. We would appreciate it very much if you could drop-off your donations on Fridays between 9:00am and 4:00pm.

2. You could register to serve as a volunteer by completing the attached Volunteer Sign Up Form and return it to us at your earliest convenience. At the present time, we desperately need volunteers who could help us find affordable apartment/housing to rent for newly-arriving refugees.

3. You could make a financial contribution by writing a check to the International Service Center, with a note "Afghan Refugees" on it, and mail it to the address below. Every dollar you contributed will be presented to a newly-arriving Afghan refugee family as a welcoming gift from a generous resident of Central Pennsylvania.

Thank you so much for your time and consideration.

‘We are safe. We are here’: Words of thanksgiving from a newly arrived Afghan family

The Zeiaye family lived in fear back in Kabul: in fear of their lives and fearful of the Taliban. Just days ago, the family arrived in Harrisburg.

Afghan refugees are coming to central Pa.; organization scrambles to prepare for their arrival

Our community is strong!
https://www.pennlive.com/news/2021/10/afghan-refugee-families-are-coming-one-organization-scrambles-to-prepare-for-their-arrival.html

In the coming - and possibly as early as Monday - Afghan refugee families could start arriving in central Pennsylvania, starting off what is expected to be a wave of refugee arrivals to the area. The International Service Center is just one of a handful of resettlement agencies scrambling to prepare...

U.S. troops may have left Afghanistan, but many Pa. families fear for people left behind | Social Views

Thank you, Dr. Joye Davis, for her insightful view of the current Afghan situation.

Here in Pennsylvania, there are dozens of families worried about their loved ones back in Afghanistan.

With the outbreak of the Coronavirus pandemic in mid-March 2020, we tried to follow the Governor's Stay-at-Home Order by closing our Center and started working from home. However, due to the need for critical information and direct assistance of the Limited English Proficient refugees and immigrants, some of us had to take turn to go to the office to help as much as possible. In early June, with the guidance and support of our partners in mission, specially from the Market Square Presbyterian Church, Dauphin County Mental Health-Intellectual Disability, United Way of the Capital Region, Central PA Food Bank, and the PA Refugee Resettlement Program, we cautiously re-activated our Social Services Program, while adhering to the strictest CDC pandemic safety protocols. Since September, with the recruitment and training of committed interns and trainees to support our streamlined staff, we have been able to restore the curtailed operation of all our programs for an increasingly unsettled client population. While hoping and praying for the best, we always tried to prepare for the worst. 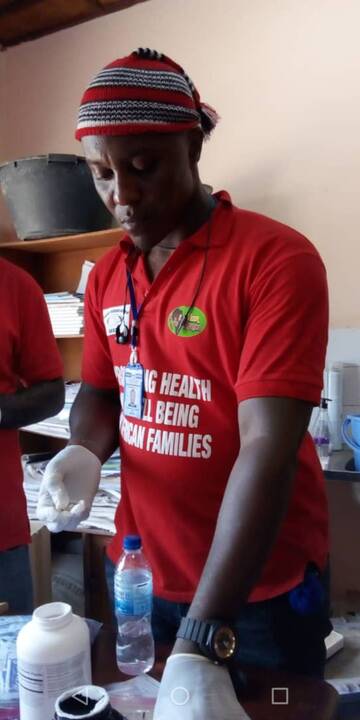 Last summer, thanks to a group of wonderful Good Samaritans from U-Penn School of Medicine in Philadelphia, our Program Assistant, Sailey Sey, was able to bring back much needed medical supplies to her hometown of Basse in Gambia. Sailey delivered the donated medical supplies, which include Dry Suction Chest Drain, Lubricating Jelly, Urethral Stent Set and other general hygiene items, to the Basse Community Health Center. The impoverished inhabitants who are living in over 100 deprived villages surrounding this unique community health center are the fortunate beneficiaries of this remarkable generosity from U-Penn School of Medicine's donors.

Approximately 100 young students of the Himalayan TaeKwonDo Academy of Harrisburg enthusiastically participated in the first Inner-School TaeKwonDo championship under the approving eyes of their parents. The goal of this championship is to encourage, motivate, and develop the confidence of the young students for strengthening their winning strategy.

We would like to welcome our newest Partners in Mission:

The ISC hosted a Mental Health First Aid (MHFA) training event for refugee service providers on Friday, June 7, 2019. This special training event was made possible through a collaborative effort of the Refugee Health and Unaccompanied Refugee Minor Program, the PA Refugee Resettlement Program (PA-RRP) and the Federal Office of Refugee Resettlement (ORR). Participants consisted mainly of representatives of different offices of the PA Department of Human Services. Sailey and Cynthia attended the training event on behalf of the ISC staff.

This 8-hour interactive course covers all the basic elements surrounding mental health issues such as Types of Mood Disorders, U.S. Adults With an Anxiety Disorder, What is Psychosis, Types of Disorders in Which Psychosis May Occur, Characteristics of Schizophrenia, Impact of Early Intervention, and How to Help.

The training was adeptly conducted by recognized professionals, including:

Over 30 partners in mission spent a splendid Friday morning at the ISC on May 31st listening to Dr. Juliette Tolay's talk about "The U.S evolving role in global refugee policies and resettlement". An assistant professor of Political Science at the School of Public Affairs at Harrisburg Penn State University, Dr. Tolay is also a well-known researcher on asylum, migration and foreign policies, as well as public attitudes in Europe, Turkey, and the Middle East. In front of a captive audience, consisting mostly of refugee education, health, social, and community service providers, the speaker discussed about the Trump administration’s turn toward a more restrictive refugee policy by comparing how the US has fared with other countries in the globe since the end of World War II. The event which concluded with a special reception in honor of the speaker was artfully moderated by Tuan. On behalf of the ISC, Phuong presented a Certificate of Appreciation to Dr. Tolay for her highly informative and inspiring message.

In an effort to network with state government agencies and other Asian community organizations, Phuong, Sailey, Thanh, and Sanh had set up a striking ISC exhibit booth at the Pacific American Heritage Celebration in front of the Harrisburg Capitol on Wednesday, May 29, 2019. The event was a great opportunity for the ISC to promote its worthwhile mission, in particular, its Language Bank, Immigration Guidance, and Refugee Support Services.

Be the first to know and let us send you an email when International Service Center posts news and promotions. Your email address will not be used for any other purpose, and you can unsubscribe at any time.

In honor of all Partners in Mission, the ISC hosted an International Thanksgiving Luncheon on September 30, 2018.

Other Public Services in Harrisburg

Where can I drop off donations?