This account is operated by the Houston Fire Department Val Jahnke Training Facility and is a department of the City of Houston, www.houstontx.gov.

Professional Development (VJTF) is proud to receive a much needed new Fleet of trucks - Thanks Assistant Chief Lozano.

Professional Development (VJTF) is proud to receive a much needed new Fleet of trucks - Thanks Assistant Chief Lozano.

Interested in a career with the Houston Fire Department?

Video: Why did I become a Houston Fire Fighter?https://www.youtube.com/watch?v=grmTwpoFbCg?

Video: What do you love about being a Firefighter?
https://www.youtube.com/watch?v=dsIFnhDsrYQ

Having a little fun today!!!

The members of the Houston Fire Department are dedicated to serving the Citizens of Houston. It takes a very special person to put their life on the line everyday to care for our community.

From the COVID-19 pandemic to natural disasters,
Houston Firefighters always answer the call of duty. The Houston Fire Department is accepting applications for Firefighter Trainee.

1. Non-Certified Firefighter & EMT: Must have twenty-four (24) transferable college credit hours with a grade of “C” or better (only two (2) credit hours of Physical Education will be accepted) OR at least two (2) years of full-time active military service with an honorable discharge as stipulated on a DD214 Member 4. Applicant must meet the above requirements by the Civil Service Exam date October 2, 2019.

2. Certified Firefighter & EMT Basic or Higher: Must possess an active Texas Commission on Fire Protection State Fire Fighters Certification Basic or higher AND an Active Texas Department of State Health Services Emergency Medical Technician (EMT) Certification Basic or higher. All certified applicants must have a High School Diploma or a General Equivalency Diploma (GED), and 15 transferable college credit hours with a grade of “C” or better from an accredited college or university. No course completion certificates will be accepted. Applicant must meet the above requirements by the Civil Service Exam date October 2, 2019.

To expedite the online application process we suggest creating an account.
New applicant? Create an account to apply online - https://www.governmentjobs.com/Applications/submitted

The posting will go LIVE on Wednesday, August 28, 2019 @ 2:00 p.m. Please visit the link below and search for Firefighter Trainee.

Hosting a College Fair at the VJTF - 16 Colleges and Universities are here and ready to help you continue your education and advance in your career. Thursday 10am - 2pm in the Gym - Rain or Shine - Bring a copy of your transcripts.

Welcome to Texas! The delegation of the fire corps of viña del Mar, Chile have come to train with us this week. So honored to host them! Come congratulate District Chief Josef Gregory on his 40 years of service in the Houston Fire Department. Chief Gregory's last day before retirement will be tomorrow 2/28/19 at the Val Jahnke Training Facility. We will be serving BBQ from 1300 until gone. Hope to see you there! 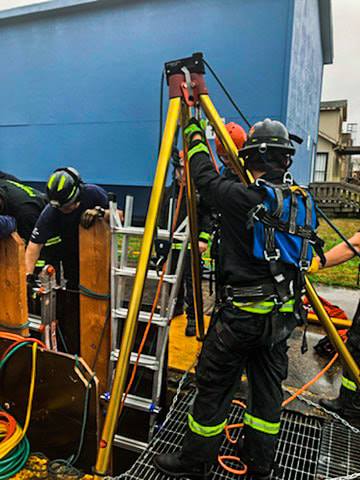 Training like this allows us to be better prepared when disaster strikes so we can respond quickly and efficiently without fail.

Had the pleasure of working with Rebellion Photonics this morning - they are doing amazing research. rebellionphotonics.com

Making a lot of good progress on the Ship Prop.

The ceremony will be held at the Omni Houston Hotel Westside - 13210 Katy Freeway - Houston 77079 starting with a Social Hour and Silent Auction at 6pm and Dinner being served at 7pm.

Tickets are available for purchase at VJTF Monday thru Friday 9:30am til 5:00pm.

We apologize for any inconvenience, but Fire Fest is not being held for 2018. Thank you.

October 7 - 13, 2018 is Fire Prevention Week in observance of the Great Chicago Fire which began on October 8, 1871 and burned for 2 days killing hundreds and destroying more than 17,400 structures.

And don't forget to visit SPARKY the Fire Dog's page!

Burn Building Renovation - New walls, floor, ceiling, and doors - changing a little of the original configuration - even refloated the roof. Revamping a building that has been set on fire 1,000's of times over 49 years is not a quick process, but in the end, it will be well worth it!

Be the first to know and let us send you an email when Houston Fire Department Training Academy (VJTF) posts news and promotions. Your email address will not be used for any other purpose, and you can unsubscribe at any time.