So today Friday, April 16 All of the members of the D shift showed up to cover the apparatus at their station. They were repaid by having one of their apparatus put out of service “browned out” and their members scattered in the wind to different crews and stations. This is becoming a huge problem- this is what happens when they keep having firefighters leave to departments that don’t punish them day in and day out and treat them like 3rd class citizens....

So today Friday, April 16 All of the members of the D shift showed up to cover the apparatus at their station. They were repaid by having one of their apparatus put out of service “browned out” and their members scattered in the wind to different crews and stations. This is becoming a huge problem- this is what happens when they keep having firefighters leave to departments that don’t punish them day in and day out and treat them like 3rd class citizens....

If you cannot make the memorial service, but would like to show your support for Captain Gunderson, his family and the firefighters at station 13, then come out and help pay tribute to a fallen firefighter who has served the Oak Forest community for over 20 years. Captain Gunderson’s last ride. Tuesday morning beginning at 9:00.

We are leaving station 13 @ 9:00 am and are encouraging anyone wanting to help honor our fallen hero by being on the last ride Route by 9:00 am.

Please share, come out and support. And wear something green.

Laid to rest a good man, captain, and friend today

The memorial service for HFD Captain Don Stamps is today at 1:30 p.m. at Sagemont Church, 11300 S. Sam Houston Parkway E., Houston, Texas 77089. The service will be live-streamed at:
www.sagemontchurch.org

Donald Clark Stamps was born in Texas City, Texas on Christmas Day in 1963. The son of Pat and Ralph Stamps, Don became an extraordinary, beloved family member, firefighter and friend.

After growing up in Texas City and Jasper, Texas, Don graduated from Jasper High School in 1981. His calling to the fire service came early. At 17, he pulled up to a brushfire and rushed to help firefighters control the blaze at Lake Sam Rayburn. He soon became a professional firefighter. After service in fire departments in Victoria and The Woodlands, Don joined the Houston Fire Department. He was a graduate of HFD Academy Class 1993/A. Rising to the rank of captain, his HFD assignments through the years included Stations 19, 45, 51, 105 and, most recently, 104. He also served as an active captain in the Champions Fire Department, after starting as a volunteer. As a member of the Houston Professional Fire Fighters Association, Don advocated for firefighter retirement security in Houston and at the Texas state capitol. He fought for what he believed in: fairness for his sisters and brothers in the fire service.

Most of all, Don was loyal and giving. He sometimes went without to provide for others. When his nieces lost their father, Don lovingly stepped up to help. They formed lifelong bonds. Whether covering friends’ shifts at the fire station or helping with remodeling or storm-damage projects, Don could be counted on. But his giving nature went beyond family and friends. He once organized a fundraiser for a needy citizen he had met while ordering breakfast at a Chick-fil-A restaurant.

In his downtime, Don enjoyed motorcycle rides, camping and hiking around Texas, the gun range, drumming, jet-skiing, his nieces’ dogs – Trooper, Taylor, Ginny, Milo, and Hamm – and Wednesday night sushi dinners with family. Those dinners included many laughs, some occasional dark humor, and running jokes that have endured for many years. Don’s wonderful sense of humor will be remembered.

The Stamps family is grateful for the support of the HFD Family, the Houston Professional Fire Fighters Association, the Champions Fire Department, and Dr. Jessica Stark and the Memorial Hermann-Texas Medical Center staff. 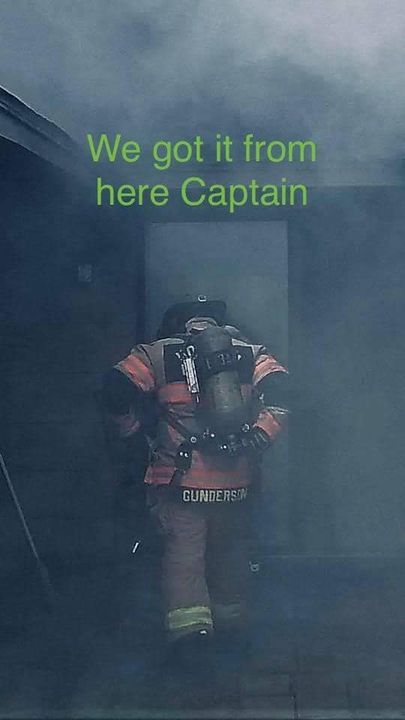 Truly a good man, firefighter, Father, husband and dear friend. We got it from here...

Houston firefighters at work: A recent house fire for the D-shift crews at Stations 46 and 55.

So today Tuesday, March 30 the whole crew of station 69 C shift showed up to work. This is how you, the residents, and our crew is repaid, they poached our firefighters and now Tower 69 is OUT OF SERVICE. Let that sink in..,

So today Tuesday, March 30 the whole crew of station 69 C shift showed up to work. This is how you, the residents, and our crew is repaid, they poached our firefighters and now Tower 69 is OUT OF SERVICE. Let that sink in..,

RIP brother. You will be missed. Please pray for his family, friends and his HFD family.

RIP brother. You will be missed. Please pray for his family, friends and his HFD family.

Three most trying days of my career. Never burned so many structures down because we didn’t have water. Passing up fires to respond to other fires. We’ll also probably never hear how many carbon monoxide deaths there really were because mayor’s office will never put the real numbers out. Total and absolute failure. Houston we were absolutely not prepared. People couldn’t get transported by ambulance because we had zero ambulances available. We had people calling back 24 hrs later asking for an ambulance. My heart breaks for all the people who were just trying to stay warm. I worked 5 days during Harvey and this felt a lot worse.

Thank you to all my brothers and sister firefighters that showed up ... most of us left our families and houses with no power, no water and busted pipes to come in with no water at station and a never ending shift. Hard to describe the heart of a Houston firefighter...

Local firefighters have been responding to several home and apartment fires as millions go without electricity and heat for days.

For all of us, with being very understaffed, overworked and not feeling appreciated by our city leaders - here are some wonderful words from the people we serve. We appreciate you more than you know and kind words and recognition go a very long way in these trying times. For all my fellow brother and sister firefighters - this right here is why we show up to work. Keep up the good work!

Deputy Chief of Surgery, thanks @HoustonFire crew for...”outstanding service”. HFD crews are examples of individuals who come to work and make HFD the professional organization it is. Thank you HFD for your service. Read full story at https://houstontx.gov/fire/submit-a-praise.html#Thanksfromlocaldoctor

Our awesome HFD Rescue crews on Southeast side at a tragic trench collapse - doing work. Prayers for the family

Our awesome HFD Rescue crews on Southeast side at a tragic trench collapse - doing work. Prayers for the family

From Andy Williamson: “On Christmas Eve 2020, at 2222 hours, Engine 5 delivered a healthy baby girl at the couple’s home that was supposed to be a C-section while waiting on Ambulance 4. Despite everything, there are still cool things that happen at this job. Picture posted with permission of family of course.”

The men and woman of Station 69 would like to wish you all a Blessed and safe Christmas. We would like to thank all of you that have been there for us. We have some great neighbors that have been very gracious with us through this very crazy year. We proudly continue to serve you and pray for a great 2021 for everyone! 🎄🎁✝️

Add to no more service of Tower 69 in this arrea. You no longer have a Ladder truck covering Walnut Bend and surrounding area. Thanks HFD for screwing people who show up to work, and on Christmas Eve at that. T-69 had all its members, but they sent it to station 31. I guess they think that area is more important than this area, even though we have a lot more high rises and much bigger houses. Whoever decided this was a good idea is not very bright.

There are only about 5 Towers in covering this city, there is a reason why they are located where they are. Why ever would you send it to replace a regular ladder truck is ridiculous. 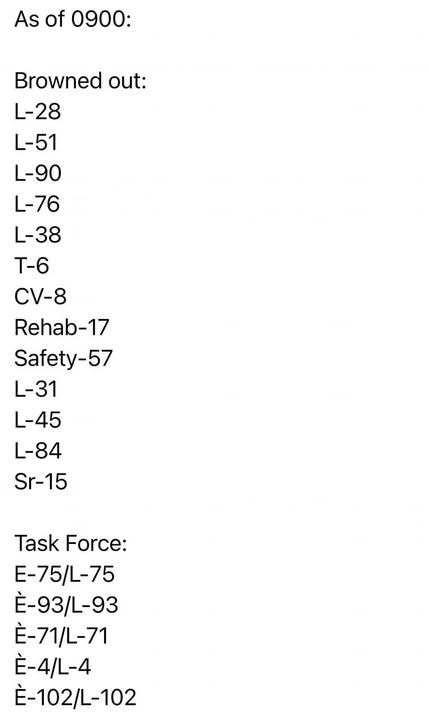 Big shout out to our own HFD shop manager Greg Miller. You deserve number 1, for all your hard work and miraculously keeping our fleet working and all our fire apparatus on the road with the pitiful budget the city gives you. Thank you!

Does anyone in our area have a kennel for sale for a mid size boxer. Looking for one today - we can come and pick it up - thank you!

Browned out yesterday.... this is a typical weekend day

The longer the mayor and city council insist on suing the firefighters and not honoring collective bargaining and prop b, the more firefighters leave, the worse the problem gets, and the more you hurt the citizens of Houston that pay your salary, and to whom you are accountable to.

As you all know recently Honduras was hit by hurricane ETA. That same area is about to be hit by Cat 5 hurricane Iota. We are collecting supplies this Friday the 19th through Sunday 21st. These much needed supplies will help our sister Honduras fire departments as well as the many families devastated by these hurricanes. If you would like to help us the needed items are: clothes, shoes, diapers, formula, cleaning supplies, hygiene products, hand sanitizers, masks, gloves, heavy duty plastic bags and household items. We appreciate any help with this. Thank you!

Mourning the loss of one of our Brother’s. Please pray for his family.

A Meal Train is active for The Bruce Family. mealtrain.com simplifies the process of giving and receiving meals and more.

'He was already a hero' | Friends remember Houston arson investigator Lemuel Bruce, who also served in the Marines

'He was already a hero' | Friends remember Houston arson investigator Lemuel Bruce, who also served in the Marines

Friends of Lemuel Bruce, who was shot and killed by an arson suspect in Houston Friday morning, mourned his death.

Yesterday HFD responded to building collapse near I-10 and Beltway 8. HFD rescue teams continue to work tirelessly to stabilize incident and remove debris and victims. Please keep the families of these workers and their coworkers in your prayers. Also,pray to keep all HFD personnel and all those working on this recovery effort safe.

One other person was also rescued from the scene near CityCentre after an apparent collapse of newly built stairs, fire officials said.

Be the first to know and let us send you an email when Houston Fire Station 69 posts news and promotions. Your email address will not be used for any other purpose, and you can unsubscribe at any time.

A Blue Angels flyover, taken from Station 69, to say “thank you” to all first responders... truly awesome. Thank you Blue Angels! To all our citizens “we are here for you 24/7” our service to you has not and will never change. More personal protective precautions, but we will always be there to answer the call!

Hi I live in Walnut Bend Neighborhood. I have heard that some fire stations keep small toys on hand in order to give to children who are in a stressful situation. I have about 20 unused small stuffed animals that I would like to donate to you if you can use them
I just called 7137835968 and it says it has been disconnected
I tried to call this phone number and it says disconnected.
Station 69-C Christmas party... Karbach
69B
https://www.crowdrise.com/T2TTowerClimbHouston
yay fire station 69!!!!! #walnutbendrocks
Okay what is the best route to get in from Montgomery????? I know we have to go 610 and come in on Westheimer. Its just getting out of Montgomery
Is the Fire Station opened and accepting clothing donations???
Can you please tell me if it is possible to get to the Beltway coming out of Deerwood, from the Walnut Bend neighborhood? My kids are in the Holly Springs apartments and I am trying to get to them.
Thanks for being out there guys!! #localheros
https://www.facebook.com/ping25/posts/10154463031556396