The Center for Inquiry strives to foster a secular society based on reason, science, freedom of inquiry, and humanist values. We fight for the unbeliever, the scientist, and the skeptic whose view the world is based on evidence and reason.

The Center for Inquiry | Los Angeles is an educational nonprofit organization that explores and advances critical thinking, freedom of inquiry, and humanist values through education, outreach, and social services. Please visit our website at http://www.centerforinquiry.net/la.

The Center for Inquiry | Los Angeles is an educational nonprofit organization that explores and advances critical thinking, freedom of inquiry, and humanist values through education, outreach, and social services. Please visit our website at http://www.centerforinquiry.net/la.

One Less Fool To Refute: Another Pastor Bites The Dust | Center for Inquiry

What goes around comes around...

I wish there was a way to get unscientific people to stop using the word science to try to convince people they know what they’re talking about. Real Science Radio, Christian Scientists, and Scientologists are practically the OPPOSITE of science! I've got shocking news for you: Believing CO ...

The Rise of the Nones with Ryan Burge | Point of Inquiry

Are you a None?

A question on the minds of many theists and non-theists alike is why are so many Americans leaving religion and becoming religiously unaffiliated? What are the underlying factors causing this shift? In today's episode we dive into what the data shows about this movement with Ryan Burge, aut ...

UFOs vs Aliens | Center for Inquiry

A skeptic looks at UFOs...

Pilots, astronauts, and tall people are as subject to human error as anyone else. I deal with smart individuals all the time who misinterpret what’s happening right in front of them as being paranormal, supernatural or otherwise extraordinary. The true explanations for these “astounding” event...

Hex Factor: Inside the Group Offering $250,000 for Proof of Superpowers

This is a nice write-up of our Center for Inquiry Investigations Group....

To defend science, the Paranormal Challenge devises experiments to test claims of X-ray vision, telekinesis, and other paranormal abilities

Flattening the Curve of the Infodemic Now more than ever, people need to hear from the voices of reason, science, and skepticism, but too often they are drowned out by the noise of misinformation, pseudoscience, and conspiracy theories, especially online.  That’s why Skeptical Inquirer, the ...

Should you be able to pass this test to hold public office?

In light of people like Marjorie Taylor Greene slipping through whatever shoddy vetting process is in place to keep crackpots out of important positions, I propose that this questionnaire must be passed by anyone who is seeking to hold public office – whether elected or appointed. If you cannot .....

We have received a grant from the DEW Foundation to create a large mural on the SE wall of CFI West on Temple St. We are calling for proposals to design and execute the mural to the following specifications:

- The mural will be approximately 20ft tall by 40ft long
- It will be painted on the stucco exterior of our building at 2535 W. Temple in Los Angeles
- It must somehow represent CFI themes, ideas, and/or images. That is, atheism, humanism, science, separation of church & state, skepticism, critical thinking, etc. See our main website at centerforinquiry.org

The designer and painter doesn't have to be the same person. If separated:
- The design award is $1500
- The ex*****on of the mural on the building pays $10,000
- There is also a small budget for materials and equipment rental

One Nation, Above God | Center for Inquiry

I dream of an America that no longer weaves God and country together as an inseparable concept. That marriage prevents us from acknowledging our mistakes, and correcting them. If God and country are one, and God is perfect, how can the country be doing something unjust? I know, I know, the count ...

Beware of 117 | Center for Inquiry

Guaranteed Predictions for 2021 | Center for Inquiry

With a nod to Ben Radford, who has used these pages in the past to predict the future, I am putting out my predictions for 2021. The difference is – sorry Ben – my predictions are guaranteed… or your money back… or something… So here they are. Place your bets now before some Vegas consorti...

Father Woody and the Human Du***ss Gene | Center for Inquiry

A pe*****le priest named Father Woody, and the upside of church attendance...

PH: How is going to church and getting sick or dying pro-evolution? AT: Every organism over the last 3 billion + years that failed to adapt to a major change – like a pandemic or global warming, e.g. – actually helped its own species by removing one more sequence of “Du***ss DNA” from their ...

Welcome! You are invited to join a meeting: Secular America Votes: How Nonprofits Can Engage in GOTV Activities. After registering, you will receive a confirmation email about joining the meeting.

TODAY! 4PM PST/ 7PM EST
How Nonprofits Can Engage in GOTV Activities
Join Secular America Votes in conversation with American Atheists for a skill-building and practical session on what you can do leading up to the election.

In 2018, the secular movement started building the foundation for a long-term, voter registration operation that will demonstrate to the political establishment, candidates, and elected officials that secular voters care about our democracy and are an important voting bloc that is an essential eleme...

Thursday, September 10 at 7PM ET, on the next SKEPTICAL INQUIRER PRESENTS live online event, Emmy Award-winning journalist and author Seema Yasmin will help us get a grip on what she calls “viral BS.”

Free registration is required to watch this live Zoom event, so sign up right now at bit.ly/SIP-ViralBS

0:00:00 Introduction Richard Saunders 0:04:07 Interview with James Underdown from the CFIIG Can you demonstrate paranormal ability? Are you interested in earning $250,000 dollars? The Center for Inquiry Investigations Group (CFIIG) at the Center for Inquiry-Los Angeles offers a $250,000 prize to any...

For the Love of a Glove

Some much great press! We have rave reviews from LA Weekly, NPR's Weekend Edition, Forbes Magazine , Compton Herald and MORE!
Only six shows left in this run so get on it!

LA Weekly review of For the Love of a Glove, now showing in the Carl Sagan & Ann Druyan Theater at CFI West!

Today’s doublespeak world can be perplexing. Quentin Tarantino rewrites the tragedy of the Manson murders into a cheerful award-winning finale, our president tells tall and twisted tales daily, and social media spins everything into multiple layers of distracting dogma and “fake news” (a term ...

Now showing in the Carl Sagan and Ann Druyan Theater at CFI West through March 8!

The creator of this satirical L.A. musical was approached by cable executives who wanted a standard biopic about Jackson. This is what happened instead.

Julien Nitzberg Announces His New Musical FOR THE LOVE OF A GLOVE, An Unauthorized Musical Fable About The Life Of Michael Jackson As Told By His Glove

Coming in January to the Carl Sagan & Ann Druyan Theater at CFI West!

Jerry Minor - From Jehovah’s Witness to Comedian | Point of Inquiry

This week, Point of Inquiry welcomes actor, comedian, and former Jehovah's Witness, Jerry Minor. Minor has been a cast member and writer on Saturday Night Live and appeared on HBO's Mr. Show and various other television and film spots throughout his career. He joins Jim Underdown to di ...

Julia Sweeney on Atheism, Saturday Night Live, and Me Too | Point of Inquiry

Julia Sweeney is back in Los Angeles! Have a listen...

Julia Sweeney joins the show to discuss SNL, her catholic faith after the passing of her brother, how CFI and Carl Sagan helped her become an atheist, and her conflicting opinions surrounding The Me Too movement after her good friend, Al Franken was accused of misconduct.

N***s, the K*K, and The Angriest Yoga Master: Another Day at the Office | Center for Inquiry

Typical day at the office... 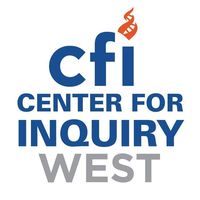 The Independent Investigations Group squares off with flat earthers.

It says TV PG, so they must have done some editing...

Call your Senators: The #JohnsonAmendment protects our democracy from religious electioneering. No sneaky budget deal should block enforcement of this law!

Dear Friend, Earlier this year, you helped us protect the Johnson Amendment from repeal by the religious right. But the fight isn’t over yet. The Johnson Amendment is the federal law that prevents nonprofit organizations, such as churches and groups like the Center for Inquiry, from endorsing ca ....

Today is #OpenlySecularDay! You can also add an Openly Secular Day frame to your profile pictures using the link in the post below this one.

Happy #OpenlySecularDay everyone! How can you participate or celebrate today? Here are a few ideas. Check out more at openlysecular.org/osd!

Today is #OpenlySecularDay! Show off your secular pride by adding this frame to your profile picture!

Why Are We Suing CVS? | Center for Inquiry

Watch our video about why CFI is suing CVS!

Homeopathy is fake medicine. It doesn’t treat or cure anything. It’s based on junk science. But retailers and pharmacies will sell it to you anyway. The Center for Inquiry is taking a stand and suing CVS for fraud.

Be the first to know and let us send you an email when Center for Inquiry West posts news and promotions. Your email address will not be used for any other purpose, and you can unsubscribe at any time.

Send a message to Center for Inquiry West:

The Center for Inquiry West is an educational nonprofit organization that explores and advances critical thinking, freedom of inquiry, and humanist values through education, outreach, and social services. Please visit our website at http://www.centerforinquiry.net/la.