Follow our Self-Guided Waterfall Tour! This is the perfect 3 day weekend to getaway!
Estimations:
30 minutes = Smalley
30-45 minutes = Long Slide
30-45 minutes - Pier's Gorge (over in Michigan ya eh)
Quick view = Quiver Falls - this one has a 'Travel Wisconsin Selfie Station!

Event Timing: May 25th or June 2nd Event Address: 901 8th Ave., Menominee, MI Contact us at 906-863-9512. *By filling out this form, it does not register a member in our summer program. This form is for parent orientation sign-up only. This is not the registration form for the summer program. Regist...

The Extension Marinette County offices have moved. We are now located in the Resource Center, which is the former Law Enforcement Center directly behind the Courthouse. Our offices are on second floor in the west wing. Access to the building is located off of Ella Court Street.

Marinette County has everything! Find information on Government officials, departments, services and more.

Looking for something for your child to do when there is no school? Why not sign them up for the REC Center's Day Camp! It'll be a day filled with activities & fun. Learn more online at marinette.recdesk.com #myrec

Open skate schedule for October 8 - 15. Remember to check out marinette.recdesk.com for the most up-to-date calendar. #myREC

Cybercriminals have become quite savvy in their attempts to lure people in and get you to click on a link or open an attachment.

With the unexpected need, the YMCA has opened our Learners Camp and is now offering a full day option.

Monday, Sept 21st 7:45am programming will begin. Registration is open with limited spots through our website: www.mmymca.org.

Research shows that nature makes our kids happier, healthier, and smarter. All we have to do is get them out there.

The September issue of the popular Northwoods Journal is now available! This month we have articles on the New Fall Driving Tour for Marinette County, PIG Garden updates, Ragweed Season is Here and much, much more. You can read the issue online at the following linkhttps://www.marinettecounty.com/i_marinette/d/Land_Information/northwoods_journal/sept.pdf

Open skate schedule for September 10-17. Remember to check out marinette.recdesk.com for the most up-to-date calendar. #myREC

Here are a few ways to remember how to properly handle fires. "Don't keep it lit, extinguish it. Follow the rule, stay until ashes are cool." #OnlyYou

I totally need this little cheat sheet of animal collective nouns! I'm having a hard time picking which one is my favorite. Maybe the pandemonium of parrots or the parliament of owls. Which one are you most drawn to? 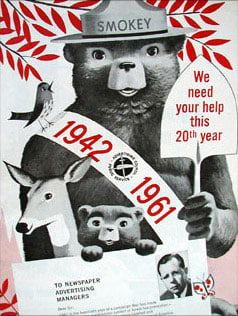 Since 1944, Smokey Bear’s been working hard to inspire Americans to prevent wildfires. Take a scroll through these historic posters.

Artist Albert Staehle was asked to paint the first poster of Smokey Bear. It showed Smokey pouring a bucket of water on a campfire and saying “Care will prevent 9 out of 10 fires.” Smokey Bear soon became very popular, and his image appeared on a lot of forest fire prevention materials. In 1947 his slogan became the familiar “#OnlyYOU Can Prevent Forest Fires!”, which was later updated to be “Only YOU Can Prevent Wildfires!”

Then in the spring of 1950, in the Capitan Mountains of New Mexico, a young bear cub found himself caught in a burning forest. He climbed a tree to survive, but he was still badly burned. The firefighters who retrieved him were so moved by his bravery, they named him Smokey.

News about this real bear named Smokey spread across the nation, and he was soon given a new home at the National Zoo, now Smithsonian’s National Zoo and Conservation Biology Institute, in Washington, D.C. As the living symbol of Smokey Bear, he played an important role in spreading messages of #WildfirePrevention and forest conservation. Smokey died in 1976 and was returned to Capitan, New Mexico, where he is buried at the State Historical Park, now called Smokey Bear Historical Park.

It's everywhere! And if you just step outside, children will find exactly what they are looking for.

We’ve received reports of Wisconsin residents who received unsolicited packages in the mail containing seeds that appear to have originated from China.

The types of seeds in the packages are currently unknown and may contain invasive plant species. Similar packages have been received in other locations across the United States.

If you receive a package of this type:
-- Do not plant or throw away the seeds.
-- If the seeds are in sealed packaging, do not open the sealed package. If possible, retain the original packaging. It may be useful as we investigate this issue.
-- Please report the seeds to the Wisconsin DATCP using this online form: https://bit.ly/DATCPUnsolicitedSeedPackages

After filling out the online form, please hold onto the seeds and packaging, including the mailing label, until Wisconsin Department of Agriculture, Trade and Consumer Protection (DATCP) or APHIS contacts you with further instructions.

Nature offers us so much. 🌿

July is Parks and Recreation Month!

Beauty awaits at Marinette County’s Goodman Park! Come for the day or stay the night in one of its 15 rustic campsites or cabins. This 240 acre park features an easy walk to Strong Falls, rustic cabins for your gatherings, miles of hiking trails, a picturesque wooden bridge, great trout fishing, nearby access to the ATV/UTV system and more! #ParksAndRecreationMonth

Effective Monday, July 13, 2020 at 8 am all employees and visitors of the Marinette County Courthouse and Annex will be required to wear a face covering in all publicly accessible areas which includes but is not limited to hallways, bathrooms, courtrooms and all other meeting rooms until further notice.

When catch and release fishing, it’s important to reduce the stress on a fish after it has been caught. You can increase a fish’s chances for survival by keeping a few things in mind:

🎣 Reduce your reel-time with the fish by reeling it in quickly.
🎣 Keep the fish in the water as much as possible.
🎣 Use a rubber net and wet hands or gloves.
🎣 Keep your handling time to 60 seconds or less and have unhooking tools readily available.
🎣 If the fish is deeply hooked, cut the line and let the fish go.
🎣 Treat the fish gently throughout the release. Support the fish with both hands and place the recovering fish in the water, with the current or gently move the fish from side to side.

For tips on how to release a specific fish species, visit https://dnr.wi.gov/topic/fishing/outreach/responsiblerelease.html

Be the first to know and let us send you an email when Marinette County Child Support Agency posts news and promotions. Your email address will not be used for any other purpose, and you can unsubscribe at any time.

Other Government Organizations in Marinette