This semester we will be hosting our Affinity Book Club with ! We will be reading Last Night at the Telegraph Club!

Swing by our center next Tuesday, November 1st from 4:00-5:00pm to pick up your copy, meet other attendees, and learn what the book club is going to look like!

Check out the history of drag in Milwaukee! For a deeper dive in the history, you should check out the book "A History of Milwaukee Drag: Seven Generations of Glamour" book by Michail Takach and BJ Daniels.

Come join us Friday from 3-5pm to play some Jeopardy!

Our Karaoke Night is coming up soon! If you'd like to perform, scan the QR Code! 🎤🎉

Have you ever wondered how UWM's Annual Drag Show started? Check out our drag journey so far!

Today is International Pronouns Day! Swipe to learn how to do better at getting new pronouns right and understand the importance of pronouns to one's identity.

Check out the History of Milwaukee PrideFest!

Swipe to learn about the LGBTQ+ History that the UWM Libraries Digital Collections has!

Next Tuesday we'll be hosting our first After Hours Event! We'll have movies, games, music, and crafts! Come hang out with us!

Swipe to learn about the BeSTD Clinic!

Do you know about the history of LGBTQ+ Student Orgs here at UWM? Swipe to learn more! +HistoryMonth

The LGBTQ+ Resource Center is excited to announce the beginning of our Affinity Group series! These are bi-weekly events where you can meet other students, discuss your identities, stories, and struggles, while enjoying lunch on us. We will also have a fourth Affinity Group for QTBIPOC students, pending the hire of a graduate student to serve as moderator.

If you or someone you know might be interested in applying, you can do so here: https://app.joinhandshake.com/emp/jobs/7053566/

Join us this Thursday for our Weekly Discord Stream as we watch First Kill!

Sign-Up slots for the Coming Out Monologues are available! These time slots are first come, first serve! Email [email protected] if you're interested!

Did you know that the Black Nite Brawl happened 8 years before Stonewall? Swipe to learn about the event and how its history was almost forgotten!

Lastly, we have the lovely Isaiah!

It's the last week to meet our staff! Say hello to Edie!

Up first for this week's is Isaac!

✨ Today is Bisexual Visibility Day! ✨ Here's a quick guide to what you should know about Bi-Visibility and Bi-Erasure! 💗💜💙

BTW: Here are some common myths about bisexuality - Let's debunk them! 💗💙💜

The 2022 Coming Out Monologues are happening soon! Submissions are now open! 🎤

The Coming Out Monologues is an annual celebration for LGBTQIA+ identified people alongside allied members of the community to show up in a space unapologetically, and share their lives through narratives of hope, support, and triumph!

We are seeking writers and performers of any experience level to share their "coming out" stories to UWM's campus community!

Scan the QR Code or visit the link in our bio to access the form!

Would you like to embark on a journey of fantasy and magic in a queer-friendly space?

The LGBTQ+ Resource Center is hosting an RPG (roleplaying game) afternoon on the first Friday of each month. Whether a new player or a veteran of many campaigns, all are welcome at this casual, fun-focused event. We will have basic guides to *Dungeons and Dragons Fifth Edition* as well as *Thirsty Sword Le****ns* and *Hot Gay Bro Dragons*.

If you have dice, please bring them! If you have extras to lend to others, please bring those, too! And most importantly, if you would like to volunteer to be a DM (Dungeon Master), please DM us with a 🎲 . Even if you are totally new, Ariana will do a "DM bootcamp" to teach the basics!

Join us on Discord Thursday to watch Joan's Galaxy!

This week's media rec is First Kill on Netflix!

It's ! Swing by the center Wednesday through Fridays to meet Bri!

Today is the start of Bisexual Awareness Week! In what ways are you uplifting the bisexual community? 💗💜💙

Thursday we'll be starting up our weekly Discord streams. Come hang out virtually to watch Crush!

Come stop by the center to meet one of our new staff members, Lee!!

Have you met Jo?! No? Wrong answer!

Next week we will be having our Fall Welcome! Come join us Wednesday, September 14th in our office in the Union WG-89 from 4-7pm! Snacks and games will be provided! See you there!!

Do you know what the difference is between Gender, Sexuality, and Expression? Here's a quick break down to show you!

Be the first to know and let us send you an email when UWM LGBTQ + Resource Center posts news and promotions. Your email address will not be used for any other purpose, and you can unsubscribe at any time. 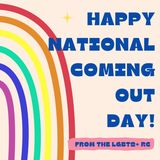 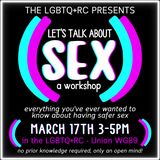 Have a question you've been afraid to ask? Feel like high school sex ed let you down? This is the workshop for you! Join us to cover the basics plus more on March 17th! 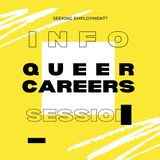 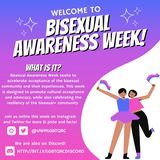 Follow us along online now until the 23rd to learn more about Bi Awareness Week! 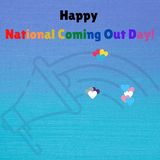 Coming out is for you, on your timeline and on your terms. We wish you happiness, safety, and love on this National Coming Out Day ❤️ #NationalComingOutDay 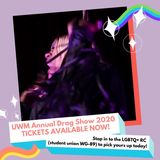 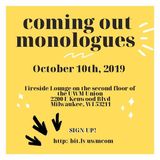 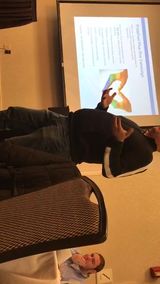 Live from Milwaukee Pride Annual Meeting “2019: Our Way Forward” awaiting to hear the PLUS ONE... 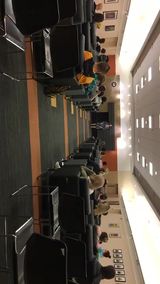 Live video from our first event of the semester, the coming out monologues! Thanks to everyone who showed up! :)

The UWM Annual Drag Show is two weeks away, and it will be better than ever! University of Wisconsin Milwaukee students and the general public can pick up their tickets at the UWM LGBT Resource Center next week until February 23rd, or the day of at the Miller High Life Theatre! We have #UWMDragShow Swag Gifts for those that donate at the door! (While supplies last) Make sure to bring  💸 for the Pay-What-You-Can donation! Shuttle services are open to UWM students & community. They will begin departing at 5:30pm Sandburg Halls, UWM Cambridge Commons and the UWM Student Union. 🎉🌈💞

The UWM Annual Drag Show is two weeks away, and it will be better than ever! University of Wisconsin Milwaukee students and the general public can pick up their tickets at the UWM LGBT Resource Center next week until February 23rd, or the day of at the Miller High Life Theatre! We have #UWMDragShow Swag Gifts for those that donate at the door! (While supplies last) Make sure to bring  💸 for the Pay-What-You-Can donation! Shuttle services are open to UWM students & community. They will begin departing at 5:30pm Sandburg Halls, UWM Cambridge Commons and the UWM Student Union. 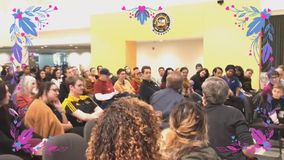 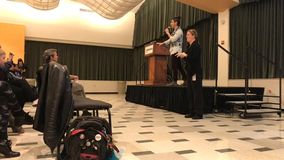 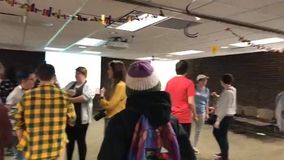 Fall Meet and Greet! Come join us in Union 191! 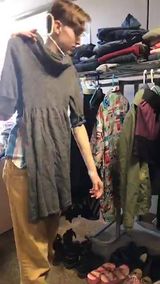 TODAY is our Queer Clothing Swap! happening from 1:30pm-5:30pm! Feel free to take clothing and bring clothing as you wish. You do not need to bring items to take items! ALL FREE & OPEN TO ALL. #QueerLove

Cooking In Community is going down at Zilber School of Public Health! Come on out, we are here until 9pm❤️ 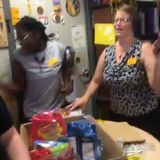 THE TIME HAS ARRIVED! 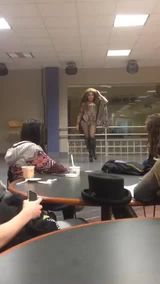 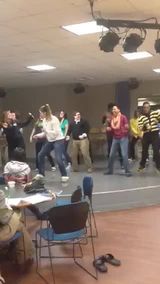 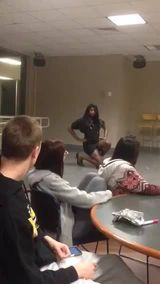 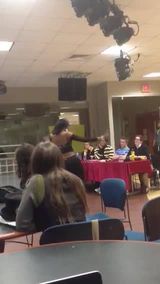 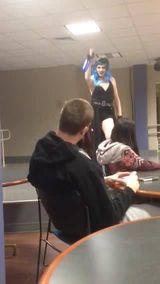 Watch #BellatrixShadow belt out some fabulous notes, and like this post if you're digging the performance! #UWMDrag 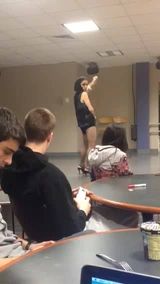 FYI!
P.S. Milwaukee campus students can take College of General Studies classes -- there's a permissions process, so feel free to contact me if you're interested!
Hope to see y'all in April at Pride Prom!
Join Michelle Caswell for talks on community archives on March 5 and 6!

March 5 | 3:30 – 5:00 p.m.
UWM Libraries 4th floor conference center
Urgent Archives: Communities, Representation, and the Fight Against (Symbolic) Annihilation, Michelle Caswell
In the 1970s, feminist communication scholars first proposed the term “symbolic annihilation” to describe the ways in which women are absent, underrepresented, or misrepresented in mainstream media. Taking this concept as a starting point, the first part of this talk will examine the ways in which mainstream archival practice has symbolically annihilated communities of color and LGBTQ communities through absence, underrepresentation, and misrepresentation. In the face of such symbolic annihilation, marginalized communities have formed their own independent community-based archives that empower them to establish, enact, and reflect on their presence in ways that are complex, meaningful, and substantive. In the second part, this talk will examine the relationship between symbolic and actual annihilation. Symbolic annihilation both precedes and succeeds symbolic annihilation in that communities are rendered nonexistent, invisible, or expendable before they are subject to violence, and then, after violence, such acts are often rendered invisible or expunged from the record, magnifying and mimicking the violence itself. In the wake of such archival silences and misrepresentations, communities often conjure up imaginary records, that is, records that do not actually exist but are collectively imagined to fill affective voids left by existing bureaucratic and legalistic records. This talk will end with an examination of such impossible archival imaginaries and a proposition for all of us to “imagine otherwise,” that is, to conceive of and build a world in which communities that have historically been and are currently being oppressed are fully empowered to represent their past, construct their present, and envision their futures as forms of liberation.

has a depth of feeling, strong sense of frustration, and hunger for growth and change
David Rooney, The Hollywood Reporter

Jose (2018): leading universalizing film of the year on love, family, struggle, change, hope - with simple dialogue and strong visuals it's transcending language and resonating in leading festivals around the world

Q***r Lion at 75th Venice Film Festival - Giornate degli Autori
Special Jury prize Bratislava International Film Festival
Special Jury prize Festival des 3 Continents
Is just the pre-show "family friendly" or is the whole 1st half of the show appropriate for children? I believe in past years the whole half before intermission was intended to be family friendly.
Not sure if this is allowed, if not please delete, but ace folks in Milwaukee, feel free to join, and add anyone else you think would want to join! https://www.facebook.com/groups/AcePlace.Milwaukee/
Dr. Jane Gallop is presenting on her new book this Friday. If travel doesn't require 18 layers of clothes, come join us! https://www.facebook.com/events/289820508558269/?active_tab=about
👋 Hey everyone! 👋

Honey LaBronx, The Vegan Drag Queen is hosting a fundraiser for our local animal rights group: Anonymous for the Voiceless and Courage MKE next Tuesday night at D.I.X. Milwaukee!

((Interested in being an advocate for animals & educating the public about veganism with our Anonymous for the Voiceless chapter? Submit your interest here: https://www.facebook.com/groups/1228596173953551/))

Her high fashion OOAK Couture Clothing has been featured together throughout Milwaukee, WI editorials, a participant in Milwaukee Fashion Week, Racine Art Museum, TMJ4 Live Morning News, and now chosen as a Finalist for THE PFISTER HOTEL Artist in Residence.
x

Other Milwaukee government services (show all)