The installation will be delaying opening until 9 a.m. tomorrow based on current and expected conditions. NEX, MWR and CYP will all open at that time. The commissary is closed on Mondays. Please contact your supervisor or chain of command to understand impacts to your specific activity or unit.

Due to the projected inclement weather, NAVSTA Newport FFSC will be operating as 100% virtual on 07 January 2022. Please contact us by calling 401-841-2283 and we will be available to answer any questions or link you to the most appropriate staff member or provider to meet your needs . Thank you all and please stay safe ❄️

Wishing everyone a safe and happy holiday season!

Have a happy and safe Thanksgiving!!!

Happy Thanksgiving to the entire Naval Station Newport community. May you enjoy a most happy, healthy and safe holiday.

Lisa will be missed.

NAVSTA Newport mourns the loss of one of it’s team members. Ms. Lisa Jacome was a NAVSTA team member since 2013, serving in both the MWR Department and the Fleet and Family Support Center (FFSC). A customer service star, Lisa was recognized multiple times throughout her career as the NAVSTA civilian employee of the quarter and year. Patrons throughout the installation benefitted from Lisa’s bright smile and gentle, compassionate spirit. Her positive attitude, initiative, resourcefulness, and tireless efforts inspired all who had the pleasure of working with her. She will be greatly missed. Visiting hours are today from 4-7 p.m. at Connors Funeral Home, 55 West Main Road, Portsmouth, RI. A private funeral has been planned.

Congratulations to one of our victim advocates!

Fleet & Family Support is hosting a Family Art Show in November! You may use your own supplies, or can pick up free supplies on base at School Age Care, Chapel of Hope or Leisure Bay. All artwork must be turned in by November 15. Your partner should never make you feel unsafe. All relationships exist on a spectrum from healthy to abusive, with unhealthy relationships somewhere in the middle. If you recognize any of the warning signs, it may be an indication that your relationship is abusive. Find help and resources on Military OneSource: https://go.usa.gov/xMMhN #NationalDomesticViolenceAwarenessMonth

Domestic Violence Awareness Month (DVAM) was launched nationwide in October 1987 as a way to connect and unite individuals and organizations working on domestic violence issues while raising awareness for those issues. During the past 34 years, much progress has been made to support domestic violence #victims and #survivors, to hold #abusers accountable, and to create and update legislation to further those goals.

You're not alone. Sexual assault can happen to anyone, no matter your age, your sexual orientation, or your gender identity. Men who have been sexually assaulted or abused as boys and teens prior to military service may have many of the same feelings and reactions as other survivors of sexual assault. They may also face some additional challenges because of social attitudes and stereotypes about men and masculinity.

Please visit Safehelpline.org/information-for-men for an overview of information that may be helpful for men in the DoD community who have been sexually assaulted.

This page provides an overview of information that may be helpful for men in the DoD community who have been sexually assaulted. If we haven't covered a concern or questions you have, you can talk to a trained Safe Helpline staff member online or by phone at 877-995-5247. You may also connect with o...

September is Su***de Prevention Month and we use this time to recommit to keeping our loved ones safe and protecting them from harm. Throughout 2021, the CNIC Sexual Assault Prevention and Response (SAPR) Program has used the Call to Action, “Respect. Protect. Empower.” as a guide for helping Sailors and their families foster healthy relationships. This month, we look to the Protect part of the SAPR Call to Action and how it relates to one of the Navy’s Signature Behaviors: “Intervene when necessary.”

Individuals who have experienced sexual assault may also experience changes in their mental health, including thoughts of self-harm. Family and friends play an important role in su***de prevention by providing the survivor with a support network and a link to professional care. If you know someone who has been sexually assaulted and experiencing suicidal thoughts, it is important to be non-judgmental and to get them connected to resources for help. Intervene if you notice changes in their mood, even if it is to remind them that you care and are available to listen.

Your local SAPR office can connect survivors and their support system to military and local civilian health counselors, Chaplains, and emergency response personnel. The DoD Safe Helpline can also connect you to your local SAPR program and provides live, one-on-one specialized support and information for sexual assault incidents. Services are available to the DOD civilian and military community 24/7 via telephone (1-877-995-5247), text (55-247or 001-202-470-5546), or online (https://www.safehelpline.org/).

September is Su***de Prevention Month. One's pain and suffering are not always obvious or physically noticeable to others. Learn more about how you can be a resource to those in need. Visit https://su***depreventionlifeline.org/

Sexual violence can have psychological, emotional, and physical effects. These effects can be difficult, and survivors may experience them at different points in their lives. With the right help and support, these effects can be managed, and you can go on to lead a healthy and fulfilling life. It is important to remember that recovery from sexual assault is possible.

Some of these effects may be caused by the brain’s biological responses to traumatic events. To learn more about what these responses look like and why they happen, visit the Neurobiology of Trauma webpage (https://safehelpline.org/trauma).

As with grief, there is no universal reaction to trauma, and individuals may experience a wide range of emotions and reactions both immediately after an assault and for months and years after. As you are reviewing the effects below, remember that every person’s healing process is different, and you may experience many of the following effects or none of them. There is no “right” reaction to trauma. Please contact a SAPR Victim Advocate or the DoD Safe Helpline for 24/7 confidential support. (Safehelpline.org or 877-995-5247).

What is Retaliation?
Experiences that may be considered retaliation can vary. It is important to remember that even if your experiences don’t match one of these definitions, help, and support are still available.
Reprisal: Taking or threatening to take an unfavorable personnel action, or withholding or threatening to withhold a favorable personnel action, for making, preparing to make, or being perceived as making or preparing to make a protected communication. Examples of reprisal may include:
• Promotion interference
• Unwarranted disciplinary or other corrective action
• Punitive transfer or reassignment
• Unfavorable performance evaluation not supported by performance

Ostracism: Wrongfully excluding a military member from social acceptance or membership in (or association with) a group of which such military member was a part or a reasonable person would conclude wanted to be a part, with the intent to inflict emotional distress on the military member and/or discourage reporting of a criminal offense because the perpetrator knew or believed that the member reported or was planning to report a criminal offense. Examples of ostracism may include:
• Improper exclusion from social acceptance, activities or interactions, bullying
• Denying the privilege of friendship due to reporting or planning to report a crime

Cruelty, Oppression, or Maltreatment: Acts of cruelty, oppression, or maltreatment are committed against an individual because the individual reported a criminal offense or was believed to have reported a criminal offense when such acts are taken by those to whose orders the individual is subject. Cruelty, oppression, and maltreatment are acts that occur without a valid military purpose and may include physical or psychological force or threat or abusive or unjustified treatment that results in physical or mental harm.

Experiencing retaliation after reporting a sexual assault can be as traumatic as the assault itself. It takes courage to make a sexual assault report and to share what happened to you with others. No one deserves to experience retaliation for reporting a crime, and there are legal measures in place to support and protect you if this has occurred or is still occurring. If you or someone you know is experiencing retaliation such as reprisal, maltreatment or ostracism as a result of your report, please contact a SAPR Victim Advocate for assistance and resources.

Resilience has been defined by the American Psychological Association as “the human ability to adapt in the face of tragedy, trauma, adversity, hardship, and ongoing significant life stressors.”
It is essential to take care of yourself. Just as you would tend to an acute physical injury by seeking support, alleviating symptoms of pain, and taking steps to ensure recovery, the same is true for an emotional or psychological challenge or obstacle.

Just as the human body is often ingenious in the way it can mend itself, so too the mind and heart can be incredibly resilient. We just have to help them along.

Below are some tips for taking care of yourself and engaging your resilience. Please feel free to use those ideas that you find most useful and continue to engage your own coping strategies.
• Physical self-care
• Get enough sleep
• Get regular physical activity
• Eat regular, well-balanced meals
• Reduce alcohol and caffeine consumption
• Release tension in healthy ways
• Take deep breaths
• Balance work, play, and rest
• Limit or eliminate exposure to media
• Emotional self-care - Know your vulnerabilities
• Get help early on if you are feeling overwhelmed
• Use relaxation skills that work best for you
• Listen to music that soothes you
• Engage socially to avoid feeling isolated
• Set limits, if necessary, when others are too demanding of your time or energy
• Reestablish a routine, if possible

The DoD Safe Helpline provides live, confidential, one-on-one crisis support for service members affected by sexual assault. Available 24/7, users can visit www.SafeHelpline.org, call 877-995-5247, or text their location to 55-247 (inside the U.S.) or 202-470-5546 (outside the U.S.) to be connected with SAPR services at their installation or command.

How Family and Friends Can Help a Survivor

• Believe them. It is important to remember that, no matter what the circumstances of the assault, there was no way your loved one could have known that she or he would be assaulted.
• Be understanding. The survivor needs to feel comfortable in sharing what happened or may not want to discuss the event at all.
• Listen to what they have to say about what happened, and be there for them. Remind them that it is not their fault.
• Be supportive. Ask what you can do to help. Do not assume you know what is best. Support their right and ability to make their own decisions.
• Be patient. Remember that it will take your loved one some time to deal with the crime.
• Become educated about the impact of sexual assault, post-traumatic stress disorder (PTSD) and other related subjects.
• Check in with them to see if they feel safe staying at their home and if they need assistance in finding a safe place. Offer to stay with them or have them stay with you.
• Encourage them to contact the DoD Safe Helpline (877-995-5247) or visit http://www.safehelpline.org/ for more information about reporting options, local resources and crisis intervention. They also can contact the National Sexual Assault Hotline (1-800-656-HOPE) or a local r**e crisis center.

What is Active Intervention?

Active intervention is a primary prevention strategy that empowers individuals to actively intervene, either directly or indirectly, when they see, hear, or otherwise recognize signs of inappropriate behaviors or unsafe situations to prevent harm. Active intervention seeks to empower Sailors of all ranks to step up and step in when they interpret events or behaviors counter to Navy’s core values and the Navy ethos.

Be the first to know and let us send you an email when Naval Station Newport SAPR posts news and promotions. Your email address will not be used for any other purpose, and you can unsubscribe at any time. 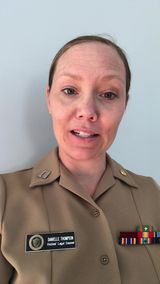 Other Government Organizations in Newport