Rear Adm (ret) Ann Phillips is confirmed as the 20th Administrator of the U.S. Department of Transportation Maritime Administration (MARAD). She is the first woman administrator to lead MARAD. “From her distinguished naval service to her leadership on coastal infrastructure, Rear Admiral Ann Phillips has championed America’s maritime sector throughout her career,” said Secretary Pete Buttigieg. “Her experience and expertise will be invaluable as we address supply chain bottlenecks, implement the maritime investments in the Bipartisan Infrastructure Law, ensure the safety and success of midshipmen at the Merchant Marine Academy, and combat climate change in the maritime sector. Learn more: https://www.maritime.dot.gov/newsroom/us-department-transportation-announces-rear-admiral-ret-ann-phillips-20th-administrator #DepartmentofTransportation #MaritimeAdministration U.S. Department of Transportation

SHIP IN THE SPOTLIGHT: This week we are spotlighting USNS GySgt Fred W. Stockham (T-AK 3017) for conducting time-critical materials delivery in support of U.S. European Command during April and May 2022.

WE ARE MSC: Lt. Myer Krah Naval Academy Grad Protects Civilian Mariners, Writes Children’s Books Guam – The U.S. Naval Academy is a world away from Guam, but one alumnus is putting the English degree he earned in Annapolis to use while stationed in Guam. Lt. Myer Krah, Class of ’16, wrote and ...

No Job too Big: Read about how the Signet Warhorse II towed USNS Yano (T-AKR 297) from Virginia to Texas in 16 days.

I recently had the honor of virtually meeting one of Military Sealift Command’s Ship’s Masters, Capt. Roshenda Josephs. Recently, Josephs was recently recognized by President Joe Biden and Vice President Kamala Harris for being the first African American woman to be promoted to the position of S...

Be Your Own Best Advocate for Promotion and Advancement

Be your own best advocate for promotion and advancement. #UnitedWeSail

The dedicated Civil Service Mariners (CIVMAR) who crew Military Sealift Command’s fleet of ships choose to sail for a variety of reasons; some seek adventure and travel in faraway lands, many heed the call of patriotic service to their nation, while others simply love the life at sea. One certaint...

USNS Laramie (T-AO 203) headlines some of the best images from the Navy this week! #mscdelivers

Lt. j.g. William Peterson was one of three members honored at the Business Executives for National Security (BENS) ceremony in Washington this week. Lt. j.g. Peterson serves in the Strategic Sealift Officer Program with the U.S. Navy Reserves, a program that provides licensed mariners to the merchant fleet who perform as tactical advisors to a ship’s crew and liaison with USTRANSCOM’s Military Sealift Command and the U.S. Navy. Read more below!

Read about their amazing accomplishments on our webpage at: https://www.ustranscom.mil/cmd/panewsreader.cfm?ID=04AA1D12-EBB4-FAAC-AB1962CAB150D122&yr=2022

Great job to the crew aboard USS Hershel "Woody" Williams for their successful mission in the Gulf of Guinea! Read more below! #mscdelivers #usnavy #maritimesecurity

We Are MSC: ENS Rosvelly Medina Served Aboard MV Endurance as a Tactical Advisor in Support of Operation Atlantic Resolve

We Are MSC: ENS Rosvelly Medina Served Aboard MV Endurance as a Tactical Advisor in Support of Operation Atlantic Resolve

NORFOLK, Va. (April 14, 2022) Born and raised in New York City, I joined the United States Navy in 2008 after graduating John Jay College of Criminal Justice. For the next 12 years, I served in the enlisted ranks as a Master-at-Arms, responsible for the Navy's Security Force, also known as the Navy....

#DidYouKnow, during times of war 90% of our military cargo is transported by sealift vessels. U.S. Navy's Military Sealift Command's Sealift Program (PM5) provides high-quality, efficient and cost-effective ocean transportation for the U.S. Department of Defense (DoD) and other federal agencies during peacetime and war. Visit their page to learn more: https://www.msc.usff.navy.mil/Ships/Sealift-Program-PM5/

Be the first to know and let us send you an email when U.S. Navy's Military Sealift Command posts news and promotions. Your email address will not be used for any other purpose, and you can unsubscribe at any time.

Born in the wake of one of the greatest conflicts in human history, Military Sealift Command, which was originally named Military Sea Transportation Service, was created in 1949 to sustain the seapower of the United States of America. Over the past 71 years, ships crewed by merchant mariners have served alongside the U.S. Navy, standing guard to ensure the world's trade can move freely anywhere around the world. This video was written by Nick Junker, a merchant mariner with Military Sealift Command.

Employees at MSC serve something bigger than themselves and give back in different ways to different communities. Operational Support Officer Steven Drexler with MSC Europe and Africa gives back to his community by swimming to raise funds and awareness for a charity that builds houses and supports an orphanage. #PublicService #UnitedWeSail

Marine Transportation Specialist John Myhre explains the value of Military Sealift Command while conducting cargo operations with SDDC in Rotterdam, Netherlands. American Roll-on Roll-off Carrier ARC, contracted with MSC, was in port for one of several deliveries throughout Europe for operation Atlantic Resolve, which is the rotation of U.S. Army gear from the U.S. to Europe. 598th Transportation Brigade - SDDC 838th Transportation 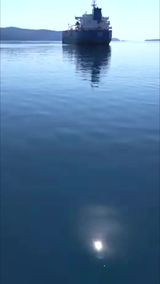 2020 mission complete for MT Marvea -- the ship was taken off hire at anchor in the harbor of Souda Bay, Greece. Marvea is a Maltese-flagged tanker and has been under contract for various periods since 2016. During that time, the crew moved over 1.5 million barrels of fuel for Defense Logistics Agency (DLA) delivering to various defense fuel support points around the Mediterranean.

#USNSSupply (T-AOE 6) and USS MOUNT WHITNEY LCC 20 perform a replenishment-at-sea during #BALTOPS2020. BALTOPS, a joint, maritime-focused exercise held since 1972, typically includes at-sea exercises and port visits. This year, for the protection of crews, it was held at sea. Supply played a critical role by allowing ships to remain on station during the exercise. U.S. Naval Forces Europe-Africa/U.S. Sixth Fleet

Team, A message from MSC Commander, Rear Adm. Michael Wettlaufer in light of recent events in our nation. "We must be willing to have difficult conversations, even if they're uncomfortable, and aim to educate others to be a catalyst for change ... Each of us is certainly part of the solution."

Every May 22, we join with communities around the nation to celebrate #NationalMaritimeDay. This is a day to recognize the greatness and strategic importance of the maritime industry. We are a maritime nation and merchant mariners, the shipbuilding and repair industry, and maritime operating companies are essential to our nation’s economic strength and national security. In peacetime, during conflict, responding to natural disasters and now during this global pandemic, our Mariners and their teammates ashore remain steadfast and committed to provide agile logistics to our Navy, support joint warfighters forward and help defend our Nation. Today we also pay tribute to our merchant mariner shipmates who crossed the bar for the final time this past year and honor the sacrifice merchant mariners have made throughout our nation’s history.

Other Government Organizations in Norfolk

Yuletide Holidays 2020 During the Covid-19 Pandemic in the Philippines.Part 1. Greetings to all. Your Tube followers and subscribers! I feature in this vlog my homecoming vacation to the Philippines. During the year 2020 outbreak of Covid-19 Pandemic. A lot of people and businesses got affected, we are grateful and thankful that there is a vaccine this year. Join me and watch how the new normal checking and arriving at Manila International Airport is changed. The Filipino family celebration of Christmas holidays. See some of the interesting places (Quezon Memorial Circle, Ninoy Aquino Park & Wildlife, Center & Manila). Events (Christmas & New Year, Feast of Black Nazarene) & people from all walks of life. Thank you for watching, like, share and subscribe.
* Captain Planet - Atlantis ...See... :) - Beautiful ... :) - Captain Planet is always with you ... :) https://www.youtube.com/watch?v=a-tPoxYbZpM&list=RDqTNsw8oiKr4&index=6 ... Note: See Personification ...
* Pharisees and Scribes
* The Great Ship Passes
God bluse u Sir and Sir and madam 🙏🥰🇺🇸🇺🇸🇺🇸🗽🥀🗽🗽🗽🗽🫁❤️❤️🫁🫁🫁😍👍🫀🫀🫀🥰🥀💗💗💗💗
+Adem-&-Eve+ TATA Madiba + TUTU PELE!
FUJIAN CHINESE COMMUNIST PARTY OF CHINA COUNTERFEITED and Steal the Philippine History and the Human identity and ORIGIN of Dr. Jose Rizal only for Plundering Economy of the Philippines both on Terretorial by Historic Rights and Legal title using Poverty Projects for the Poor Pilipino. There was NO DR. JOSE RIZAL of Pilipino HISTORICAL FIGURE WHO IDOLIZED plunderers, oppressors and murderers from genealogy of FUJIAN VILLAGE GREATER THAN THE PILIPINAS! LINE 3-5 PARAGRAPHS 1,5,13 & 14 AND LINE 1-2 PARAGRAPHS 1,12 & 13 MI ULTIMO ADIOS. DR. JOSE RIZAL NEVER SURRENDERED THE REGION OF THE SUN, THE SEA OF THE ORIENT, HIS FOREIGN FRIEND, OUR BELOVED COUNTRY AND OUR GOD ALMIGHTY INTO THE GENEALOGY OF THE ANCESTOR'S OF THE SIONGQUE VILLAGE OF CHINA! IT WAS RIZAL WHO SURRENDERED AND GAVE HIS LIFE TO THE SOVEREIGN COUNTRY OF OUR GOD! LINE 5 PARAGRAPHS 8 & 13 MI ULTIMO ADIOS. THERE WAS NO GOD IN THE LOST EDEN OF PILIPINAS WHO IDOLIZED AND PRAY TO SURRENDER THE PILIPINO TO THE CHINESE ANCESTORS BEING BORN FROM FUJIAN GENEALOGY OF CHINA. DR. JOSE RIZAL SAID THERE WAS NO GOD WHO BECOME SLAVE AND IMMIGRANT IN HIS OWN EDEN WHO ARE BEING OPRRSSES AT THE CHINESE GARDEN & CHINA TOWN OF PIRATES, LOOTERS, MURDERERS, SLAVES, PLUNDERERS AND OPPRESSED MARCOS-AQUINO-DUTERTE FAMILY OF XU KHO, KE YINAN, CHUA SIOKTO AND GENERAL YE FEI
Book about a sailor's life on a replenishment ship during Vietnam. Will enlighten your family and friends about your service onboard these ships.
𝐖𝐞 𝐚𝐫𝐞 𝐜𝐨𝐮𝐧𝐭𝐢𝐧𝐠 𝐝𝐨𝐰𝐧 𝐭𝐡𝐞 𝐡𝐨𝐮𝐫𝐬 𝐮𝐧𝐭𝐢𝐥 #𝐁𝐌𝐓𝐆𝐫𝐚𝐝! 🥳 𝐖𝐢𝐥𝐥 𝐛𝐞 𝐥𝐢𝐯𝐞-𝐬𝐭𝐫𝐞𝐚𝐦𝐞𝐝 𝐭𝐡𝐢𝐬 𝐓𝐇𝐔𝐑𝐒𝐃𝐀𝐘, 𝐉𝐔𝐋𝐘 𝟏𝟓, 𝟐𝟎𝟐𝟏 𝐌𝐨𝐫𝐧𝐢𝐧𝐠 𝐚𝐭 𝟗:𝟎𝟎 𝐂𝐒𝐓. 𝐏𝐋𝐄𝐀𝐒𝐄 𝐉𝐎𝐈𝐍 𝐀𝐍𝐃 𝐒𝐇𝐀𝐑𝐄, 𝐓𝐇𝐀𝐍𝐊 𝐘𝐎𝐔 𝐉𝐨𝐢𝐧𝐢𝐧𝐠👉👉 https://cutt.ly/vmY21rE
Let's make some 📣NOISE 📣 for this week’s USAF Basic Military Training Graduation! #BMTGrad will be live-streamed this Thursday morning at 9:00 CST. joining 👉👉 https://cutt.ly/dmnzGWi Let's you join us now!
12th-Annual Wounded Warfighter Lone Sailor 5k/10k COMING SOON THIS EVENTS >>> https://fb.me/e/EYoC2Una