A place for those who survived Naval Boot Camp in Great Lakes, IL to reconnect and catch up!

I've received inquires over the last couple of years about old Cruise Books. Sadly, I didn't have a good answer other than to post a general inquiry with which book one is interested in on this page and the US Navy FB page.

Recently I came across the following link in another group. I was even able to find a couple of photos of my dad from his time on the JFk.

US Navy Cruise Books are unofficial publications published by a ship's crew to document a cruise or deployment. The number of copies of a cruise book is very limited. Several commands only order copies for about 2/3 of the crew as a rule of thumb. Creating those books is an old tradition in the US N...

My apologies for not posting in awhile. COVID has hit everyone pretty hard and I got a little lazy in the mix.

The rest of February looks to be a quiet one. Here's to the poor folks braving that "Lovely" Great Lakes winter!

Start the year off right and show the upcoming grads the kudos they deserve. Not only the rigors of Boot Camp, but surviving a cold, Great Lakes Winter! BRAVO ZULU! Don't worry, you'll thaw out!

October and the Fall chill is upon us. Show some warmth for the upcoming classes proudly graduating this month. BRAVO ZULU shipmates! (From experience, be glad that you won't be at RTC for Winter!) FMI https://bit.ly/2mAIsjl

Looks like the spirit of Independence Day is going strong at Recruit Training Command! Congratulations to our new sailors that have braved the summer heat and joined the ranks of the greatest Navy on Earth!

Sorry I've been absent as of late. RTC had a lot of proud graduates this May, BRAVO ZULU to them all and I sincerely hope you are enjoying your first Commands and/or schools if you've gone in rated.

June is no exception and looks to be a busy month for graduations as we welcome more Sailors into the greatest Navy in the world. So let's show our new Sailors our gratitude and salute them as they begin the journey of a lifetime!

It looks like March is going to be a busy month at U.S. Navy Recruit Training Command! BRAVO ZULU to our new Shipmates "springing" into their new careers! May your first steps toward the Fleet be the first steps of a great adventure!

Don't forget to show your pride for your new sailors and share photos of your great moments at RTC!

For details about RTC and all the command details, go to: http://www.bootcamp.navy.mil/tg_grad_dates.html?fbclid=IwAR1WpHzVc0baGe8_cnMpUapVEi16CxCN8aFiIIwH8GFbB5adNqpv_IE16y0

Celebrate the New Year and cheer on the first divisions of 2019! BRAVO ZULU to all of you, may your New Year be the start of a fresh, bright career!

For details about RTC and all the command details, go to: http://www.bootcamp.navy.mil/tg_grad_dates.html?fbclid=IwAR1WpHzVc0baGe8_cnMpUapVEi16CxCN8aFiIIwH8GFbB5adNqpv_IE16y0

How about a big shout out and BRAVO ZULU! to Training Group 38 graduating this weekend! Looks like great weather to help them celebrate!

Looks like it'll be a hot, but good day to welcome Training Group 36 into the World's Greatest Navy! Don't forget your sunscreen and as the RDC's always say, "HYDRATE!" Ask your graduate, they'll tell ya! 😁

Quick poll, who has been to watch someone else graduate and join the ranks of the greatest Navy in the world? What your favorite part/best memory?

Just for fun, who still has at least one old uniform? And the million $$$ question, does it still fit? 😀 What better way to spend your summer, than cheering on the newest members of the Greatest Navy in the world! Here are the dates for the summer graduations.

Upcoming graduations for the month of May. BRAVO ZULU Shipmates!

If you're headed off to "A" School, remember to do your best and you'll have a shot at better orders and points for your first Evals!

Don't forget, tag us in your grads photos and share their accomplishment on their first steps toward greatness!

Coming up this month, March graduations. A big BRAVO ZULU to our new shipmates embarking on to new and exciting adventures around the world!

If you know a sailor graduating and will be attending any of the upcoming Pass & Review ceremonies, please don't be afraid to post your photos and share the journey with those of us that have since returned to shore!

A few things to bear in mind with the upcoming holidays.

For the details you'll need to know about RTC. 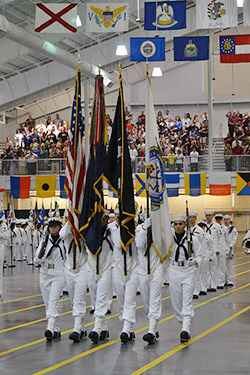 For upcoming graduation and general info about R.T.C.: http://www.bootcamp.navy.mil/upcoming_grads.html Don't forget to proudly share photos of your graduates! They've worked hard and we all know they'll be smiling come liberty call!

Be the first to know and let us send you an email when I survived the US NAVY RTC GREAT LAKES posts news and promotions. Your email address will not be used for any other purpose, and you can unsubscribe at any time.