The Stafford Police Department is comprised of a total of 85 employees; 19 civilian employees and 66 sworn officers. The Stafford Police Department patrols a total of 7.6 square miles and works with a population of 18,000 citizens and an estimated daytime population of 80,000. Civilian and sworn personnel work closely to provide the citizens and our large business population with a safe place to live, shop and work.

Stafford Officers had the opportunity to travel to South Texas to speak and recruit from multiple police academies.

This morning, a promotional ceremony was held at the Stafford Police Department for Officer Rulong, where he was promoted to Sergeant, by Chief Ramirez.
Sergeant Rulong's daughter had the privilege of pinning the Sergeant's badge on her father.
Please join us in congratulating Sergeant Rulong, as he transitions into his new role.

Thanks Onsitedecals LLC. The officers will love them.

Our Hearts and Prayers go out to Deputy Omar Ursin and Harris County Precinct 3. Ursin was murdered while picking up food for his family.

National Night Out is an annual community-building campaign that promotes police-community partnerships and neighborhood camaraderie. Stafford National Night out is Tuesday, October 4, 2022. Hope to see everyone out. We are Stafford Strong!

NATIONAL NIGHT OUT is Tuesday, October 4, 2022, and the Stafford Police Department is a GO!

All participants will need to fill out the Application found in the attached link and return it to Officer Shanklin-McCartney.

This young man is from Belgium. His family is staying in Stafford, so he was able to attend a crime scene summer camp.
He wants to be a police officer.

This is 5th Street, the line for ECC extends all the way to Staffordshire.
We encourage all parents to use the free transportation (school buses), so that you do not have to wait in line over an hour to pick up your kids.

Good Morning Stafford!
Today is the first day of school, and Chief Ramirez wants to remind everyone to take their time, be safe and watch out for our children, as they embark on a new year of learning and growth.

Now let's see those Back to School photos!

On August 9th, a promotional ceremony was held at the Stafford Police Department for Officer McKinnies, where he was promoted to Sergeant McKinnies by Chief Ramirez.
Sergeant McKinnes’s daughter had the privilege of pinning the Sergeant badge on her father.
Please join us in congratulating Sergeant McKinnies, as he transitions into his new role.

As we all push through this summer heat, be mindful that it is also hurricane season and situations can happen in a blink of an eye.

Always be prepared, have a plan of action and most importantly, stay safe.

Thank you Dulles Nutrition for the goodies.

It's that time. Come out and join Dulles Nutrition and Stafford Police Department for a cup of tea.

It only takes 10 minutes for a car to heat up and become deadly!
❌ Never leave a child in a car alone.
👁️ Always check the back seat.
🔒 Lock unattended vehicle doors.

Be the first to know and let us send you an email when Stafford Police Department, Texas posts news and promotions. Your email address will not be used for any other purpose, and you can unsubscribe at any time. 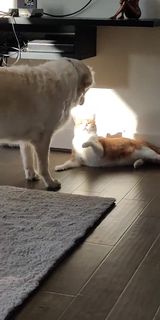 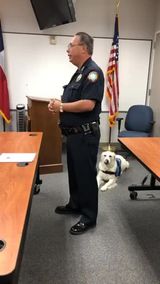 Thank you to Ms. Samoan for her safe driving skills as we head into the Thanksgiving Holiday. To show our gratitude, we gifted Ms. Champagne and her family with a donation Thanksgiving Dinner courtesy of the Elias Family. Happy Thanksgiving to the Champagne Family! 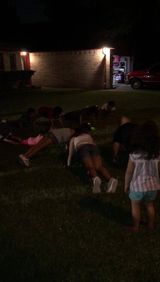 Captain Herman doing his push-ups with the kids. 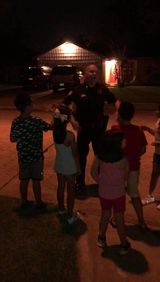 Captain Herman got busted by the kids for not having his challenge coin...and the kids knew what comes next. 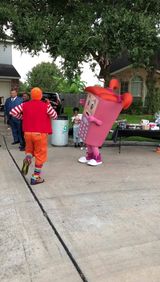 Cell Phone Sally’s got some moves 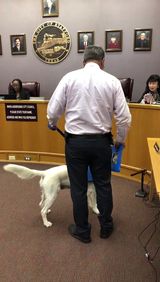 TYLER vs. TYLER Push Up Challenge 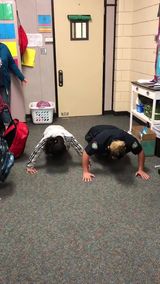 Several members of the Stafford Police Department visited with students at the SMSD Career Day. Here we have Officer Molina taking on the push-up challenge with one of the students. GREAT JOB TO EVERYONE!!! 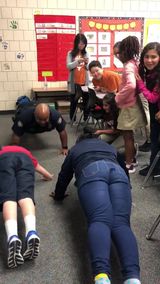 Career day at SMSD, looks like Officer Tyler got caught again without his challenge coin. Thank you to the students that participated in the push-up challenge.

We’re coming to the close of the 2019 City of Stafford Spring Clean Up. Thank you to all of our volunteers and residents that stopped by.

Officer Tyler got caught again without his challenge coin. Per Honorary Police Officer Richards v2.0, 10 PUSH UPS FOR YOU MISTER! 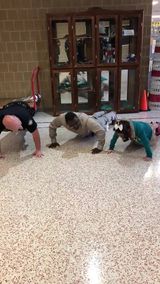 The SMSD Elementary School hosted a law enforcement appreciation breakfast and someone got caught without their SPD challenge coins. I think our young student has the best form. #NationalLawEnforcementDat

Finally, here is the suspect vehicle in the aggravated robbery. If you recognize the person or the vehicle depicted, contact Fort Bend County Crime Stoppers at 281-342-TIPS (8477) or www.fortbend.crimestoppersweb.com. Information that leads to apprehension and filing of criminal charges could earn you up to a $5,000 CASH REWARD!

Here is the surveillance video from the prior post. Do you recognize this person? If you do, contact Fort Bend County Crime Stoppers at 281-342-TIPS (8477) or www.fortbend.crimestoppersweb.com. Information that leads to apprehension and filing of criminal charges could earn you up to a $5,000 CASH REWARD! 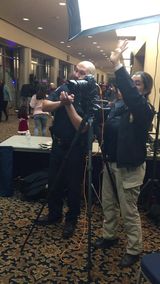 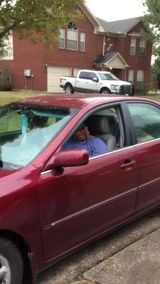 Officer McKinnies and the Stafford Police Department paying it forward this Thanksgiving. This family was stopped for following the traffic laws and was rewarded with a Thanksgiving Dinner courtesy of the Elias Family. Many blessings to this family and all families this Thanksgiving Season. 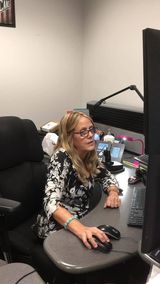 TCO Holloman’s last call!!! We wish you the best in all your future endeavors. 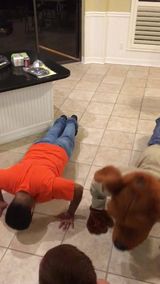 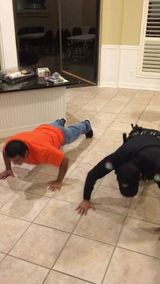 Officer Guzman was caught without his challenge coin, and one of our Kingsway residents joined in on the push up challenge! 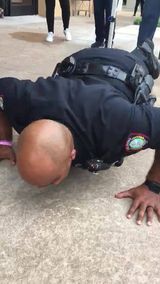 Officer Tyler got caught AGAIN without his challenge coin. Pushups were in order. One day, maybe he will learn. 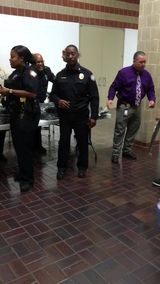 I think Assistant Chief Horn may have a second career in auctioneering! BACKPACKS!!! FREE BACKPACKS!!!

Great crowd at this year's 4th of July Celebration

PRESS RELEASE On September 19, 2016 at approximately 3:15 pm, a homicide occurred in the parking lot of the Kentucky Fried Chicken fast food restaurant, located at 12570 Southwest Freeway, Stafford, Fort Bend County, Texas. The victim, Theodore Emiko, also known by his artist name of “Chase Santana”, arrived at KFC in a blue 2009 Jaguar. Shortly after, Theodore met with a black male and they both entered the Jaguar. After several minutes, video footage shows the black male suspect exiting the front passenger side door of the Jaguar in a hurried manner and enter into the back seat of a dark colored (possibly green) 4 door passenger car (believed to be a 2013-2015 Chevrolet Cruze). The vehicle speeds off with two other unidentified passengers inside. The male subject seen in the video was the last person to see Theodore Emiko alive, and is a person of interest in this case. The Stafford Police Department is seeking any information that may lead to the identity of any of the persons that were involved the murder of Theodore Emiko. Anyone who has information on this crime is asked to call Fort Bend County Crime Stoppers, Inc. - Call (281) 342-TIPS (8477) - Submit Online: http://www.fortbend.crimestoppersweb.com/ Information, which leads to the apprehension and filing of charges on the suspect(s) involved, could earn you up to $5,000 CASH REWARD All calls to Crime Stoppers are ANONYMOUS - Visit our Facebook: https://www.facebook.com/fortbendcountycrimestoppers/ for details on a New easy way to submit tips via the P3 Global Intel App. 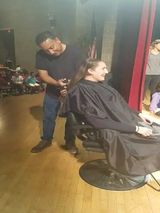 School Resource Officer Valdez, along with multiple students, two teachers, and one parent donated their hair to the Children With Hair Loss Program. SRO Valdez had the suppoort of the ENTIRE Stafford Elementary School behind her. Thank you to SRO Valdez and all those who donated to this cause. #Childrenwithhairlossprogram #StaffordMSD #StaffordElementary

On May 2, 2018, at approximately 5:50 PM, a patron of the Circle K store at 2939 S. Main, Stafford, Texas, was using the ATM machine inside the store. After feeling something unusual when removing his card, the patron tugged on the card reader and a device that was substantially similar to the actual card reader came off of the ATM. Subsequent investigation revealed that a subject had entered the store several hours earlier and possibly placed this device on the ATM. The subject is described as a white male, approximately 6 feet tall, with black hair and beard, wearing a black shirt, a black jacket with a fur-lined hood, ripped blue jeans and black socks. The subject was driving what appears to be a silver Audi 4-door station wagon (likely a model between 2000 and 2004), with no front license plate, a sun roof, and luggage rails. If you have any information regarding the identity of this person of interest, or feel that you may have been a victim, contact Stafford Police Department Detective Ceballos at 281-261-3950 or 281-261-3987.

Merry Christmas to my favorite guys and gals in blue! Stay alert out there!
It's been busy at our house preparing for delivery tomorrow to Stafford & Meadows PD!
The holiday season is a time of good cheer, but safety is still important. Stafford Weekly News Reporter, Randall Williams, shares some tips from Stafford’s first responders on how to stay safe during the holidays.
Stafford Police Department, Texas
Stafford Fire Department
How many meals will be enough to cover everyone? Pop Pop will deliver Friday, Christmas Eve around 11 am!
Is the verdict in? Do we have a decision on Christmas dinner?
How's our voting going on the Christmas meal? Please let me know your choice tomorrow!
Stafford Police Department, Texas Records Clerk, Floria Perez, who is also a swim instructor shares how a student used the techniques she learned in Perez’s class after falling off a boat. Full story: http://ow.ly/N7NF50H4Lqc
Meet the newest members of the Stafford Police Department, Texas. Officers Horrocks, Rainey, Rulong and Potter were recognized during the City Council meeting. Welcome to the team!
i just want to thank you guys for everything you do. i continue to pray for your safety and the safety of the fire dept. i hope you all have a wonderful holiday season and peaceful new year!
Don't forget Thursday's delivery of tamales and cupcakes from Mama Reising! I think I need my own badge#!
Domestic violence has been a serious threat to those at risk, and raising awareness and support can make a difference. Stafford Weekly News reporter, Carolina Linares hits the trails at the 18th Annual DA Fun Run. Broadcast October 29th, 2021 on Stafford METV. https://youtu.be/JhFXkdvUw9o
Stafford Police Department, Texas
First net responders! Firefighters, police officers, EMT, everyone is welcome! Stop by our AT&T location to get free coffee and donuts! 😀

Other Stafford government services (show all)