We are the drama department at Texas High School in Texarkana, TX. Go Tigers!

This is the TTC's page on FB where fans of the TTC can stay current on what's happening, current and former students can share theatre tips and stories, and the TTC players can keep up with their many responsibilities.

Broadway, you brought the house down Sunday. Watching both cast bring their own versions of these beloved characters to life has been an amazing experience. Now on to our next production!

West End, you deserved every bit of applause today. We can’t wait to see what you bring to the stage next!
Don’t burst into hysterics if you missed our two showings today, we still have a showing by our Broadway cast tomorrow at 2pm!

Here’s a little preview of what you missed out on on Thursday night but don’t worry we still have three showings!!

Tomorrow is opening night!! Dont miss out on finding out who dunnit!!

Murder, Mayhem, and Mystery! A game of who dunnit come to life with two casts! This is not a show to miss!

Clue Make Up Parent Meeting! We can’t wait to see you!

First week of rehearsals! This week we have script pickup and our first read throughs. All cast, swings, stage managers and assistant mangers need to be there!

So excited to bring 100 years of theatre to life in celebration!!

We have exciting news!

We are in need of a net (like a volleyball net, tennis net, or similar, preferably white if possible) as well as a yellow fisherman's jacket for our upcoming UIL One Act Play production.

The net can be beat up and weathered, even have some holes or tears in it, but we are looking for a donation, as we will need to permanently modify it for the show.

The fisherman's jacket would be an item we just need to borrow and return once the production is over.

Please pass this along to anyone you think might be able to help us out. Thanks!

The cast and crew say it best: 📣

Tomorrow, tomorrow, the show is tomorrow 🎭

SHOW WEEK!
In the world we live in today, EVERYONE could use a little hope. Remember, tomorrow is only a day away!

If you have not already purchased your tickets, visit http://www.ttcths.booktix.com to purchase them.

Bet your bottom dollar that you won’t want to miss this!! Tickets are on sale now!

Does anybody know where we can obtain a fake switchblade knife as a prop for "Annie"? Maybe one that is actually a comb? I tried the Spirit store and Dollar Tree...any suggestions?

Please donate old bed sheets! We need several (about a dozen) bed sheets for our Annie production. Old and worn is great. Please help us out by giving us your old disused bedsheets. We can even make fitted sheets work. Any color - any size, and sooner is better than later. Please send them to Mr. Hanna in the scene shop at the PAC. Thank you!

TTC is excited to display the excellence of our program for all to see in our new trophy case! Thank you Boosters and all who helped make this dream come true!

Looking for THS Drama history... next year marks the 100th year of drama at THS, and we are looking to create a digital archive of programs, pictures, cast lists, info about what shows were done in what years, etc... whatever info you may have about your time (or your parent's time) here in the drama department at Texas High. If you would, please take a photo of whatever documents you have that might help us create a more complete picture of the first 100 years, and share it with us. You can email it to me at [email protected] You can also reply to this post if you just have some text-able info. We have a pretty good grip on the shows performed since the Sullivan PAC / John Thomas Theatre opened. Mainly looking for pre-2009 info. Thanks so much!

Anybody know where we can find an old wheelchair for our production of Annie? Only President Roosevelt (Mr. Folse ) should ever be sitting in it... Does not have to be this chair exactly, but something period appropriate. Thanks for any leads!

Senior spotlights for the class of 2021! Way to go! In a year full of challenges and celebrations, you filled the stage with wonderful stories and extraordinary talent!

Tigger Theatre Company Seniors! We are so proud of you and all you have accomplished.

*Lead Cast, Supporting Cast and Orphan Leads will meet tomorrow, Wednesday, May 26 at 4:00 PM in the PAC rehearsal room*

Congratulations to the cast of Annie, and thank you to all who auditioned!
Tech Crew will be announced in August.
Dance and Vocal Ensemble will Audition on August 17!

Tiger Theatre Company will have Annie Auditions on May 17 for Annie and Orphans and May 18 for all other parts. Email Mrs. Newton at [email protected] for an audition package.

Tonight our journey has come to a beautiful conclusion with earning an outstanding technician, honorable mention all star cast, and all star cast award. This troupe took written text and created a breathtakingly beautiful show that highlighted how theatre can bring all of us together which in this year of unknown we need. These students have taught us how to measure everything in light. Continue to shine bright into all your endeavors!

Troupe 2526 President, Lia Graham, attends a city council meeting to be presented the Theatre in Our Schools Month Proclamation for Texarkana. We are excited to kick off this celebration of theatre with the city of Texarkana. March 1 kicks off Theatre in Our Schools month. Help Tiger Theatre promote the importance of theatre by sharing our theatre info. posts this month and by supporting your local theatres.

His smile lit the PAC hallways and his joy was contagious. From working in the scene shop to performing on stage, Drew Martindale left a lasting impact on Tiger Theater Company. Gone too soon from us, Drew now lives sweetly in our memories and dearly in out hearts. We love you Drew.

https://linktr.ee/Thetigertheatrecompany
8th Grade Orientation information for Tiger Theatre Company. Check us out and see why it is great to be a THS Tiger!

Linktree. Make your link do more. 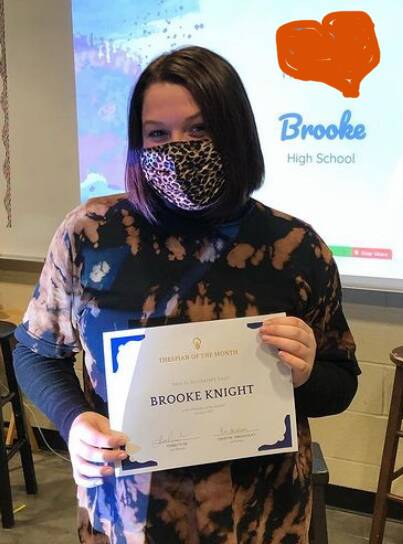 Tiger Theatre Company is a 2020 Texas Thespian Honor Troupe. During this crazy year, the troupe has come together for numerous community service projects, arts advocacy initiatives, shows and troupe building activities. It hasn't been perfect or smooth; we have had to put some traditions on pause this year, but nothing has held them back or kept them down for long. Thank you to the Troupe Officers and Members and the entire Tiger Theatre Company. As we look forward to 2021, we are ready to continue to lead, grow, advocate, and perform. Texas Thespians 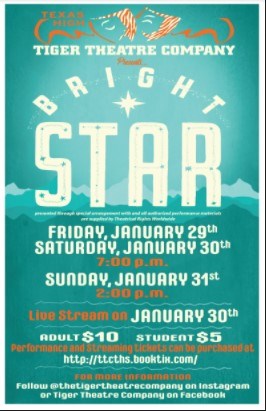 Come away with Tiger Theatre Company to the Appalachian Mountains and enjoy our production of Brightstar with music written by Steve Martin.

Troupe 2526 Thespians of the Month: Jessie Garren, November and Tyler Unger, December! Our future is bright!

Be the first to know and let us send you an email when Tiger Theatre Company posts news and promotions. Your email address will not be used for any other purpose, and you can unsubscribe at any time.

The cast and crew say it best: 📣 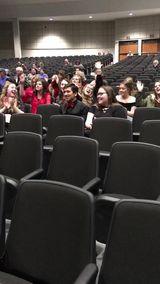 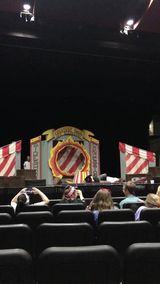 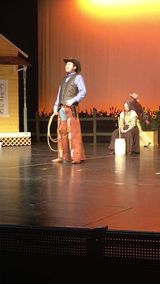 Since our kids are being asked to choose between attending school in person and remote learning, is there any insight about whether the Tiger Theatre Company will have options for remote learners to still participate in theater? That's the only part about this that is making us waiver.
http://michiganfuture.org/01/2018/google-finds-stem-skills-arent-the-most-important-skills/
https://theatreanddance.appstate.edu/students/prospective-students/25-life-skills-learned-theatre
I got my tickets for Sunday and I am looking forward to it so much!!!
For over thirty years, Mr. John Thomas (affectionately known as “Mr. T” by his students) served as the Director of Drama at Texas High School. A consummate student of the craft himself, John was a one-man band, providing his students instruction into every facet of the theatre-from history and theory, to technical skills (such as lighting and set design), to makeup and costuming, and of course acting.

Whether he was providing gentle, constructive direction to his student actors, keeping them in their place with zinging one-liners when they got too cocky, or gathering his cast in a circle behind the little theatre for the traditional 1-2-3 “BREAK A LEG!”, John was more than just a teacher to most-he was mentor, counselor and a very positive role model.

After every production closed its run, John and his wife Linda opened their home to the entire company and hosted a cast party for all involved, regardless of the number. Even after being without her husband’s company for weeks on end during rehearsals, Linda was always happy to share him, for just one more evening.

In early Spring of 1981, Mr. T provided THS students as ushers for the very first public theatre performance in the newly renovated Perot Theatre- a practice he continued until 2009 - some 28 years. During this time, John and Linda were also very involved with a community theatre group, known as Texarkana Regional Theatre (TRT), and performed a myriad of tasks in support of that organization.

When TexRep (Texarkana Repertory Theatre) was established in the early 90s, once again, John and Linda got involved. The Thomases were amongst the first sustaining members of TexRep and John has frequently been on the other side of the director’s chair as a cast member in many productions through the years, always giving very memorable performances. In addition, John and Linda took on the task of serving as TexRep’s box office, setting up a dedicated phone line in their home, taking reservations and working the ticket booth, a job they performed for many seasons.

Most recently, John and Linda are working with the Arkansas Municipal Auditorium Commission, a group dedicated to restoring another historic performance venue in Texarkana. The Arkansas Municipal Auditorium hosted one of the first concerts Elvis Presley ever performed, hosted performances from the jazz age through the 70’s, with countless other legendary musicians gracing the stage in its heyday.

Backstage or onstage, John and Linda Thomas have given over 50 years of service to the performing arts here in Texarkana.

In honor of John and Linda's lifelong work in and committment to live theatre here in Texarkana, TISD and the Tiger Theatre Booster Club have established the John & Linda Thomas Endowed Scholarship Fund.

This Endowment, will help us award a scholarship worthy of the names John and Linda Thomas, and will also provide truly meaningful assistance to a college-bound Theatre major.

It is our initial goal to raise $75,000 to establish this Endowment, with plans to make the first award in May, 2018 at the Annual Tiger Theatre Awards Assembly.

All contributions are 100% tax-deductible as all gifts will be received and administered through the Texarkana Public Schools Foundation, a 501c3 organization. Please make your gift as soon as possible so that we may count you among our Founding Donors. In order to receive credit for your contribution this year, please remit your gift by December 31, 2017. Please make checks payable to:
Texarkana Public Schools Foundation
John & Linda Thomas Scholarship Fund
ATTN: Ms. Deidra Reeves, TISD Chief Financial Officer
4100 Summerhill Road
Texarkana, TX 75503

You may even spread your donation over a period of years, if it will make it more comfortable for you to do so.

We want to thank the TIGER THEATRE BOOSTERS for their initial contribution of $5000 to help establish this fund, and also, the following individuals for their generous contributions:
Ms. Tonia Olsen
Dr. Phyllis Abel Deal
Mr. Bobby Abel

We hope you will please join us in honoring John and Linda with a Scholarship worthy of their names, as well as helping more deserving graduates realize their higher education dreams.
x

Other Texarkana government services (show all)