We are a diverse group of men and women dedicated to safeguarding New
Jersey’s resources 24 hours a day, 7 days a week, through the prevention
of crime, apprehension of criminals and enforcement of criminal and motor
vehicle laws of the state, and enforcement of park regulations. The New Jersey State Park Police are empowered with the same Law
Enforcement authority as all New Jersey municipal,

We are a diverse group of men and women dedicated to safeguarding New
Jersey’s resources 24 hours a day, 7 days a week, through the prevention
of crime, apprehension of criminals and enforcement of criminal and motor
vehicle laws of the state, and enforcement of park regulations. The New Jersey State Park Police are empowered with the same Law
Enforcement authority as all New Jersey municipal,

Island Beach State Park will be closed to all use on Monday, February 21, due to emergency utility maintenance.

The park will reopen on Tuesday, February 22 at 8 a.m.

NJSPP shared in the final salute to Ocean County Sheriff’s Officer Brian Stockhoff yesterday in Brick, NJ. Hundreds of police officers from in and around Ocean County filled the streets from Brick to Lakewood in a mile+ procession to pay tributes to a locally popular officer. Officer Stockhoff is credited with founding the OCSO’s Mounted Unit. He frequented Double Trouble State Park in both training and aiding visitors in need throughout his career.

RIP Officer Stockhoff and thank you for your service! Our condolences to both your family and the entire Ocean County Sheriff 911 .

We would like to welcome Officer Trainee Tyler Vardanega to our agency. He will soon begin as a recruit in the Basic Course for Police Officers at the Mercer County Police Academy. We wish him the best of luck during this training!

We share our sincere condolences with the family of Retired Chief Ranger Tom Card in announcing his passing recently this week. Thank you for your many years of service.

In K9 Officer Kriete’s spare time he assists with recreational sports and enjoys fishing and boating. His favorite part of being a New Jersey State Park Police Officer is working with the K9 unit and training.

Our condolences to the family and friends of Ocean County Sheriff's Officer Brian Stockhoff, who passed away suddenly early this morning. Officer Stockhoff, with "Mounted 1" was an ambassador for the Sheriff's Department and a fixture at parades, County parks, and large events throughout the area. The Mounted Unit was also trained for back woods search and rescue to find lost or injured hikers at parks like Double Trouble. We mourn with his brothers and sisters in the Ocean County Sheriff’s Office.

Happy Valentine’s Day from our own K9 Ringo! Ringo is always up for a photogenic holiday greeting! Future departmental charity fundraiser?? 🐾🚔💙

Jumping on the bandwagon and using this picture to wish you all a Happy Valentine's Day. Whether you spent a unique 60 degree day on a hiking trail with your significant other this weekend or are bundling up to celebrate today; we wish you and yours a great one!

Here are some photos from a recent weekend rescue of an injured hiker on the Stony Brook Trail near the A.T. and Stokes State Forest. NJSPP officers often work joint search and rescue operations with local first responders and volunteer SAR teams.

Teams involved in this rescue include:

Thank you to everyone who used one of our drop off locations to make a donation!

(Pictured below is NJSPP K9 Officer Mott at the VA.)

Pursuant to N.J.A.C. 7:2-3.4(d), recreational use of ATVs is not permitted on lands administered by the NJ State Park Service.

Thank you for your help in protecting New Jersey’s natural and historic resources.

Our agency would like to welcome Police Officer Justine Matulewicz to our agency. P.O. Matulewicz was recently sworn in and has already begun her field training. She is an alternate route graduate of the Passaic County Police Academy. We wish her a safe and successful career policing New Jersey's State Parks, Forests, and Historic Sites.

We would like to congratulate Police Officer Matthew Costelow on his recent graduation from the Mercer County Police Academy! We welcome him to our agency as he begins his Field Training. Best of luck on a safe and prosperous career!

Here’s a quick look at a typical fresh snowy day up at High Point State Park. (Thanks Officer Viggiano for the photos).

In preparation for the impending winter storm, gates at state parks and forests will begin closing at 4 p.m. today, January 28.

It is expected that many state parks, forests and historic sites will remain closed for the majority of Saturday, January 29, while maintenance crews are conducting snow removal activities. Park reopening updates will be posted on our page.

New Jersey government has declared a State of Emergency ahead of tonight’s blizzard.

Please follow your local State Park on social media or the web before you venture out tomorrow.

If your local State Park is closed, please respect signage and maintenance/State Park Police directions. Parks will reopen when it is safe and clear to do so.

NJSPP was present to honor NYPD Det. Jason Rivera today at St. Patrick’s Cathedral in midtown Manhattan. Together with a sea of tens of thousands of brother/sister law enforcement officers, we stood tall to mourn a passionate young police officer taken far too young.

The NJ State Park Police stands in solidarity with our brother and sister officers of the New York City Police Department (NYPD). This year has been a rough one at best.

We recently learned that P.O. Jason Rivera married his wife, Dominique, at our own Liberty State Park in Jersey City, NJ this past October.

We thank both officers for their service and sacrifice and know that they will NEVER be forgotten!

“It is not how these officers died that made them heroes, it is how they lived” -Etched on the walls of the National Law Enforcement Officer’s Memorial in Washington, DC.

NJSPP officers in the North and Central districts responded to two seperate incidents over the weekend involving deer stuck on ice. Officers at Round Valley Recreation Area joined local volunteers to rescue a deer off of the reservoir.

Officers at Monksville Reservoir (Ringwood State Park) were joined by volunteer first responders to bring a deer to safety in their park.

Great work to all personnel involved in both incidents on a safe resolution!

Officers Pittore (left) and Conte (right) participated in a joint Ice Rescue training for first responders on Lake Hopatcong today. Coordinated by New Jersey State Police, they learned how to use ice rescue protective equipment as well as tools used in an emergency. They demonstrated their knowledge of these tools and techniques with hands on scenarios in a simulated ice rescue. Many state parks in New Jersey have bodies of water that freeze in the winter. These officers are now prepared to assist our local first responders in case of an ice rescue emergency. Great work officers.

Thank you to everyone who participated in the 2nd annual Christmas Tree Recycling Project at Island Beach State Park!
The recycled Christmas Trees help trap loose sand which rebuilds dunes that are damaged from seasonal storms and regular erosion.
We would especially like to thank all of the volunteers who donated their time and hard work today, as well as Officer Winter, Officer Digiantomasso, and Officer O'Neill!

If you are interested in becoming a New Jersey State Park Police Officer, please click on the link and apply on the NJ Civil Service website. The announcement closing date is February 28, 2022. Application instructions are provided on the website.

NJ State Park Police Officers worked in various roles over the weekend in support of the Army Navy Football game at MetLife Stadium in East Rutherford, NJ. Our explosive detection K9 handlers supported the mission at the stadium and various off site locations in explosive detection and protection details.

Our Liberty State Park officers were involved in months of planning and executing the safe and secure evening at the Army Navy Gala on Ellis Island.

It was a great weekend of working together with our law enforcement partners at the local, county, state, federal, and military levels. Congratulations to Navy on their victory!

Please join us in welcoming Police Officer Skyler Conte who recently joined our ranks. P.O. Conte graduated from the Morris County Police Academy and will begin his field training this week. In the academy, he was the recipient of the 200 Club Award for his “Outstanding efforts and attitude”. We wish him all the best in his career here. Stay safe.

Congratulations to Officers Todaro and Wentzell on their Life Saving Awards presented by the NJ State PBA this weekend in Atlantic City!

***MCPO made the below update as this subject has been located deceased. Our thoughts and prayers go out to his loved ones***

Attention visitors and residents local to Allaire State Park. Please be on the lookout for 17 year old Shawn Erm. Shawn is missing from the area of the Wall Twp/ Howell Twp border in Monmouth County.

This past weekend NJSPP participated in two Trunk or Treat events in Wawayanda State Park and Wharton State Forest! Officers had the opportunity to hand out candy to hundreds of visitors at both parks! We love to work with our surrounding communities! A huge thank you to everyone that came out this weekend and for all the work the Officers put in to make these events a success!

Congratulations to Detective Steve Franzone for receiving the September Officer of the Month!

State Park Police responded to the Sussex Branch trail parking area on a report of a motor vehicle break in. Detective Steve Franzone, guided by past incidents, went to the Walmart in Ledgewood and spotted a vehicle identified in past burglaries with two occupants inside. He conducted a motor vehicle stop and both occupants, Mr. Andy Fernandez-Baez and Ms. Estefoni Cabada-Paulino, were charged accordingly in numerous motor vehicle burglaries by several police departments.

Be the first to know and let us send you an email when New Jersey State Park Police posts news and promotions. Your email address will not be used for any other purpose, and you can unsubscribe at any time. 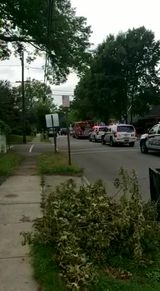 Other Government Organizations in Trenton