Fighting for the people of the Iowa's 2nd Congressional District!

We should be giving our border patrol more tools to combat this crisis, not taking them away!


The Border Patrol agents cleared of criminal wrongdoing in the wake of a media-driven frenzy over images falsely suggesting they whipped Haitian migrants are nonetheless prohibited from riding horses, hobbling their ability to secure swaths of the border inaccessible by car, according to a Border Pa...

Great to be in Nevada with Governor Reynolds and Congressman Feenstra for the grand opening of Verbio's new facility! Iowans know the positive impact of biofuels and it was an honor to be in attendance last week.

Great meeting with the Greater Burlington Leadership class today to discuss my work in D.C. and the impact they can have in their community!

It was a pleasure to join the Greater Des Moines Partnership today in Washington!

I visited the El Paso Sector last year and spoke to CBP about the crisis and challenges they are facing, they need our support asap!

Another crisis this Administration has failed to address

Some parents are driving hours at a time in search of supplies. Others are watering down formula or rationing it, hoping for an end to the shortage.

Serving in the Army was one of my greatest honors. Happy Military Appreciation Month to all of our men and women who serve to defend our country and protect our freedoms!


Mariannette Miller-Meeks: The cattle industry is one of Iowa’s top economic exports bringing over three billion dollars a year in revenue to our state and our farmers.

China is hunting down Uyghurs with help from some surprising countries

What the Chinese Communist Party is doing to the Uyghur people is unconscionable. The CCP must be held accountable.

More than 1,500 Uyghurs have been detained, extradited or rendered, most in the Middle East and North Africa, says a report from the Woodrow Wilson Center.

Be sure to check out my website or call my Ottumwa office if you or a student you know is interested in applying to one of the U.S. service academies.

Our senior citizens have contributed so much to our great nation and deserve our recognition each and every day!

Be sure to sign up for my weekly newsletter!

Being a mother is the greatest gift anyone can have. I wish all my fellow moms across the country a Happy Mother's Day and encourage everyone to celebrate their mom today.

Seventeen University of Iowa students and alumni were chosen from about 10,000 Fulbright Award applicants nationwide to serve as representatives of the U.S. State Department to teach English abroad and to undertake public health research and creative writing projects in 16 countries.

Help with a Federal Agency

If you need help with a federal agency reach out to one of my offices!


If you can't get an answer from a federal agency in a timely fashion, or if you feel you have been treated unfairly, our office may be able to help resolve a problem or get you the information you need. While we cannot guarantee you a favorable outcome, we will do our best to help you receive a fair...

Skin cancer is, unfortunately, one of the most common cancers with one out of five Americans receiving a skin cancer diagnosis before the age of seventy.

Whenever you are going to be exposed to UV rays make sure you apply sunscreen to minimize your risk of skin cancer!

MARIANNETTE MILLER-MEEKS: A Badge of Honor

Sanctions from the Russian Foreign Ministry will not deter my support for Ukraine. I promise that I will continue to stand up to Russia and hold them accountable for the illegal invasion of Ukraine and the war crimes they have committed against the Ukrainian people.

Opinion | Pull the Plug on the Disinformation Governance Board

A waste of taxpayer dollars.

"The Biden administration has a full plate: Ukraine, inflation, the border, Joe Manchin. The Disinformation Governance Board is a terrible idea. Pull the plug. Shut it down now."

Pull the plug now on Homeland Security’s Disinformation Governance Board.

Americans have been paying higher prices for months and some folks are just starting to notice.

Democratic Sen. Mark Kelly of Arizona said he was "not satisfied" with the White House's attempts to address rampant inflation.

I am proud to represent a district with so many cattle farmers and to fight for them everyday to ensure that they are treated fairly in the market.

I encourage any students interested in attending one of our nation's service academies to apply for a nomination or to contact my Ottumwa office if you have any questions about the nomination process!

This week I had the chance to spend some time being trained by the best in Iowa!

It was a great day with the staff at Casey's in Washington. Had so much fun being put through the paces and getting a behind the scenes look at the day to day for them!

Before I found my calling to medicine, I dreamed of becoming a teacher to share my passion for learning.

I am incredibly thankful the amazing work our teachers do, working with our students every day to give them the best future possible. Happy Teacher Apperception Week!

Happy Small Business Appreciation Week to all of the small businesses across Iowa!

Small businesses are the backbone of our economy and employ millions across the United States. This week (and every week!) make sure to show your support for your local businesses!

Children in Head Start programs are in some of the most economically vulnerable populations and need our support. I was proud to partner with Rep. Dave Joyce to introduce companion legislation to unmask our students!

When President Joe Biden spoke to a group of teachers last week, he revealed how Democrats view the relationship between schools, parents, and students. “[Students are] not someone else’s children, they’re like yours when they’re in the classroom,” he said.

We discussed their work to help low income families in Iowa and my support of Community Service Block Grants to help our more rural communities.

Great to join Rep. Steve Scalise on his offshore energy tour! Our country is full of natural resources and we need to tap into them to ensure our energy independence.

A badge of honor

If speaking out against Russia’s war crimes and the continued spread of authoritarianism and tyranny under President Putin results in sanctions, then I am proud to wear this sanction as a badge of honor and will continue to voice my support for the Ukrainian people.

Russia needs held accountable for the heinous war crimes that have been committed against the people of Ukraine.

Improving the transparency and availability of WIC contracts will give mothers the best options available to feed their children. Making this contract data readily available will increase competition and give better options to mothers.

We have all seen the data showing that our students have been hurt by closures and remote learning, especially in low-income and rural communities. Children in Head Start programs are some of the most vulnerable populations and need our support.

U.S. Reps Mariannette Miller-Meeks and Dave Joyce introduced a resolution to nullify a requirement a HHS rule that Head Start students 2-years-old and up to wear a mask.

I am proud to stand with the people of Ukraine and I am inspired by their bravery and will to fight for their country.

WASHINGTON (KWWL) -- Iowa's four U.S. Representatives have been sanctioned by the Russian Government this week.

Be sure to sign up for my weekly newsletter!

Be the first to know and let us send you an email when Rep. Miller-Meeks posts news and promotions. Your email address will not be used for any other purpose, and you can unsubscribe at any time.

Miller-Meeks Once Again Votes Against Russia, In Support of Ukraine 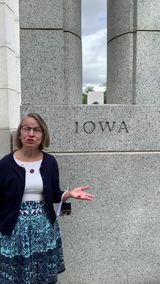 Miller-Meeks Speaks in Support of Fully Funding the Iron Dome

From the 9/11 Memorial in New York