In addition to the below posted Tuesday and Thursday hours, the Peabody Room is open the first Satur

To learn more about Mr. Parrott's connection to Georgetown, click on https://www.hmdb.org/m.asp?m=68712 and https://georgetownmetropolitan.com/2015/09/25/now-and-a-long-time-ago-montrose/. 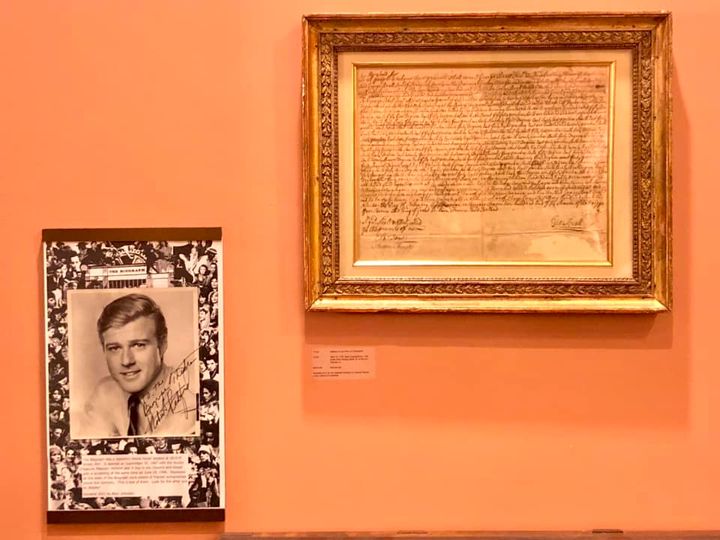 Where else can you see a late 1960s autographed 8 x 10 glossy of Robert Redford (made out to the Biograph Theater) displayed next to a 1757 deed from George Beall bequeathing 1,380 acres extending from upper Georgetown to Tenleytown to his son (Beall was a co-owner of the land that became Georgetown)?

Why, at the Peabody Room of course!

See these and lots of other treasures tomorrow, Saturday, January 7th, from 10:00 am to 6:00 pm. Third floor, Georgetown Neighborhood Library, 3260 R Street, NW.

Have You Visited the Peabody Room? - The Georgetowner

Jerry McCoy's curatorial work and story-telling and the remarkable history of Georgetown on display, make the Peabody Room a must-visit...

What would you like to see more of from the pages of the 1822 Intelligencer and the 1922 Star?

A favorite of genealogists and researchers of local DC history, the announcement of the first publication of a Washington city directory appeared 200 years ago today. The 148-page directory sold for $1.00 (about $25.50 today).

A facsimile edition was published in 1938 by R. L. Polk & Co. (city directories publisher). While DCPL special collections has numerous copies of this edition, it does not house a copy of the original imprint.

A useful list of all individuals that appear in the directory may be viewed at http://www.theusgenweb.org/dcgenweb/geography/dc_people_1822.shtml

Has anyone ever seen the 1822 edition?

Perspective | My Christmas gift to you: A head-scratching D.C. trivia quiz

Was George Peabody the inspiration for "Scrooge"? - Peabody Historical Society

Let's dig into this historical Christmas rumor. Head to our Blog for more.

This confectionery was located on the north side of M Street between 31st and Wisconsin Avenue.


As bad as DC rats are now, they used to be worse — in the mid 1960s, there were more rats living in Washington, DC than there were people! The problem was pa...

The Independent is an important voice in the community of readers and writers dedicated to book reviews and writing about the world of books. 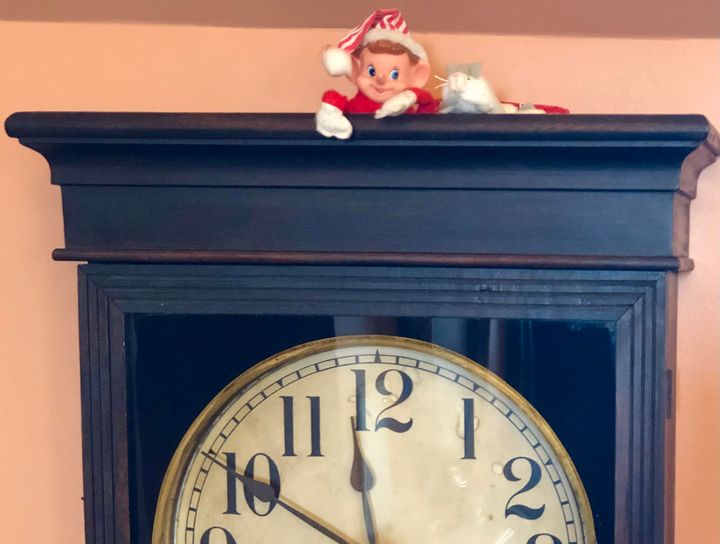 Elf and friend are here at the Peabody Room!

When are you going to visit?

First Street is the section of today's N Street located on the west side of Wisconsin Avenue (High Street). Wanting to know more about "Mr. Welch" who owned the referenced mansion, a quick consultation of the 1872 Boyd's Washington, DC Directory indicated that a James S. Welch lived at 29 1st Street. Welch was co-owner along with Abraham H. Herr of Herr & Welch, a flour milling operation that was located at Potomac and Grace Street.

No wonder he lived in a mansion!

Knowing that 29 1st Street, if extant, was located on the south side of N between Wisconsin and Potomac, a quick survey of https://tinyurl.com/5n8b9suu narrowed down the only possibility of Mr. Welch's mansion being 3248 N Street. Originally constructed in 1808 as a two-story brick house for Walter Smith, a third floor topped by a mansard roof was later added to the structure.

With a current address in hand, the Peabody Room's house file for 3248 N was pulled and confirmed Mr. Welch's residency. In 1888 the mansion became The Baptist Home for Aged & Retired Persons and served in that capacity until it was sold in 1962. Today the property is a 7-unit condominium.

To peruse the 1872 or other DC city directory years, use your DCPL library card at https://www.dclibrary.org/ancestry

A very small collection titled "Labor Contract and Inventory of Enslaved Persons in Georgetown" has recently been added to DigDC. This collection consists of two manuscripts that document the existence and work of enslaved people and free laborers in Georgetown in the early 1800s. The manuscripts include a contract for the labor of an unnamed enslaved man; and a log of enslaved people and free laborers.

Terms of Use and Privacy Policy ©2019 DC Public Library. All rights reserved. District Digital was made possible in part with funding from the Institute of Museum and Library Services. Brought to you by Washington Research Library Consortium.

Jeff Bezos Says He Will Give Away Most of His Fortune

The Amazon founder, estimated to be worth $124 billion, suggested in an interview on CNN that he would donate most of his money to charity in his lifetime, the first time he had made such a pledge.

Alan Rubin, co-founder of the Biograph Theater, dies at 85

He was a geologist before discovering art house movie theaters in San Francisco. With friends, he opened one in Georgetown. 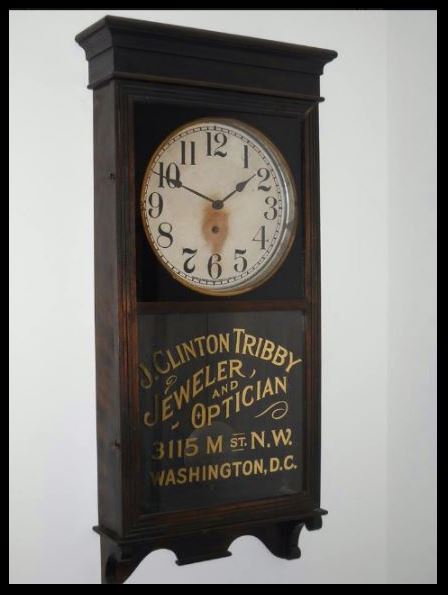 Reminder: Daylight saving time ends tomorrow at 2:00 am, so don’t forget to "fall back" and set your clocks back one hour!

In honor of today's 125th anniversary of the opening of the Thomas Jefferson Building of the Library of Congress, stop into the Peabody Room this week and received a free vintage postcard!

The Filming of "The Exorcist" | Georgetown University Library

In October and November 1972, scenes for the movie, The Exorcist, were filmed at sites on or close to the Georgetown University campus. The Quadrangle, Dahlgren Chapel, Healy Hall, Old North, Kehoe Field, the Lauinger Library steps, and the “Exorcist Steps” (74 stone steps offering a convenient ...

Good 2013 article on author William Peter Blatty in the WaPo at http://tinyurl.com/k8tgab6 .

Update on the raising of the 1865 Georgetown Market. Seven thousand dollars is equal to about $164,000 today.

Tending to the dead: Meet the man who lives at DC’s Oak Hill Cemetery - WTOP News

Tending to the dead: Meet the man who lives at DC’s Oak Hill Cemetery - WTOP News

This spooky season, WTOP’s DMV Download got the scoop on cemeteries from a man who lives on the grounds of one in D.C.

(Surprised to learn that the 1865 Georgetown Market was raised two feet!)

Please join us for a celebration!

We are so happy to announce that the armillary sphere at the Entrance Ellipse in Montrose Park is ready to be reinstalled! Please join us on Sunday, October 23rd from 3 to 5 pm. We will celebrate the return of the sphere and honor Sarah Louisa Rittenhouse in whose memory the sphere was originally erected and who was the driving force behind the creation of Montrose Park.

Thank you so much,

Friends of Montrose Park is an official partner of the National Park Service, supporting Rock Creek Park through its SOLVE (Sustaining Our Lands with Volunteer Energy) stewardship program.

(Does anyone know if current owner PNC Bank has plans to celebrate the structure's 100th anniversary?) 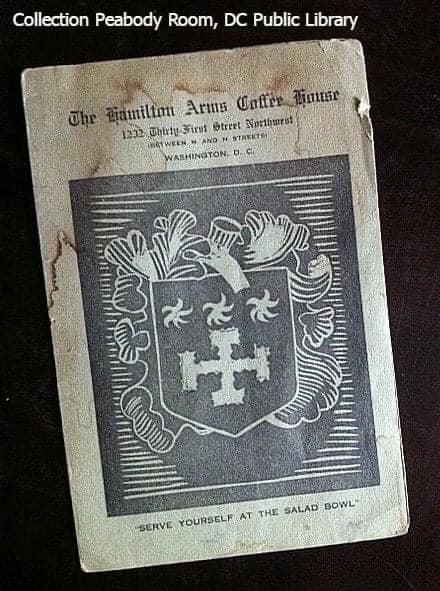 This menu is from the Hamilton Arms Coffee House, located at 1232 31st Street, NW in Georgetown from 1939 to 1957. The staining at the top wasn't the result of spilled coffee but was due to water damage from the 2007 Georgetown Neighborhood Library fire!

Today the Peabody Room was visited by Sue Hyde Dodge Casner and her brother, Charles Tyler Dodge, GGG Grandchildren of Francis Dodge, Sr. (the man in the portrait behind them). The siblings are holding a group photograph of Mr. Dodge's six sons that was taken March 3, 1877 at the studio of C. M. Bell, 459/461 Pennsylvania Avenue (the day before the presidential inauguration of Rutherford B. Hayes).

In light of the fact that this painting turned 50 years old this year, I thought I'd try again to see if anyone might know who the artist is. Thank you! 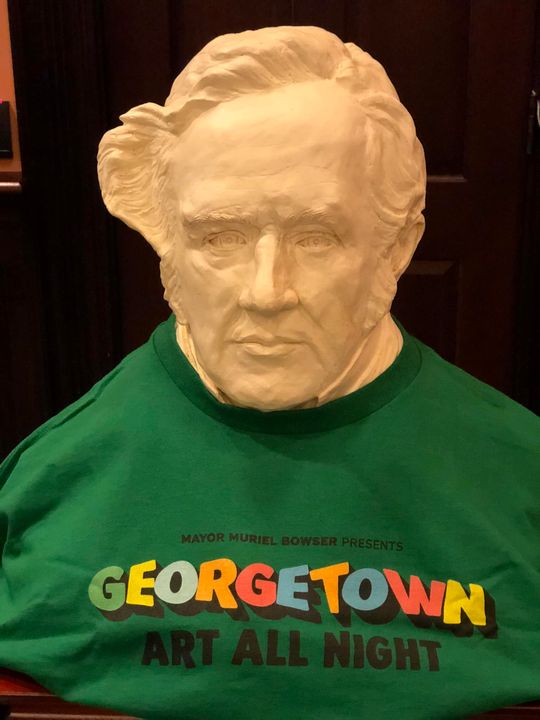 Be the first to know and let us send you an email when Peabody Room - Georgetown Neighborhood Library posts news and promotions. Your email address will not be used for any other purpose, and you can unsubscribe at any time. 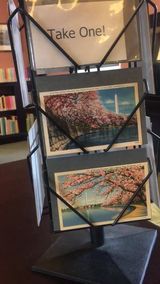 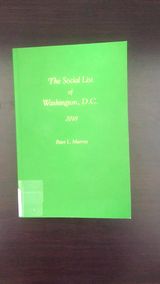 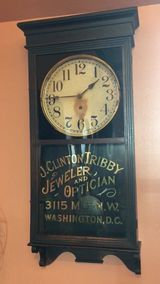 The Peabody Room is pleased to unveil its latest acquisition! This “Regulator No. 4” pendulum wall clock was manufactured by the Sessions Clock Company of Forestville, Connecticut. It was purchased by Joseph Clinton Tribby (1875-1953), owner of J. Clinton Tribby, Jeweler and Optician, located at 3115 M Street NW, between 1910 and 1928. Tribby’s father, Charles Ellsworth Tribby, founded the business in 1864 at 512 7th Street (in today’s NW quadrant). By 1875 Charles Tribby had relocated to Georgetown at 120 Bridge Street (north side of today’s 3100 block of M Street NW). In 1940, 3111-3119 M Street was demolished with J. Clinton Tribby having prior relocated next door to 3123 M Street. Long known as “the Tiffany’s of DC,” this landmark Georgetown business remained in operation until 1977. If you patronized Tribby's or have materials related to this business or the Tribby family, please let us know in the comments! Acquisition of the clock is courtesy of The Samuel M. Levy Family Foundation. 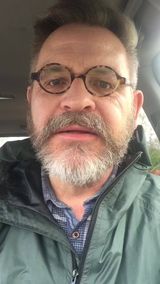 How you know folks who say they are from Georgetown are really not from Georgetown. It is Dumbar not Dumbar Street. Beall (pronounced BELL) was wounded in the battle of DUNBAR (Scotland) and he was given a land grant (which is now Georgetown) and he named his home DUNBAR! Dunbar House, Dunbarton Oaks! Dumbar was used later not as a complement for the many Scottish and Irish labors who worked and lived here and they were called DUMBARTONSHIRES (and it was not a complement)! Prove me wrong! !
Yarrow Mamout may be Georgetown's most famous historic Black resident. Originally from the West African country of Guinea and literate in Arabic, Mamout was enslaved and brought to the US at the age of 16. He later moved to Georgetown as a free man and bought a house just around the block from Q Street and Dumbarton House - at 3324 Dent Place NW (his house no longer stands).

In 1819, famed portrait painter Charles Willson Peale spent two days painting and talking with Mamout. As Peale noted, Yarrow was “comfortable in his Situation having Bank stock and [he] lives in his own house.” This was one of two paintings known to have been made of Marmout. Peale’s hangs at the Philadelphia Museum of Art and the other, by James Alexander Simpson, is on display at the Peabody Room - Georgetown Neighborhood Library. Learn more about Mamout by reading the WAMU 88.5 - American University Radio and Washington Post articles at linktr.ee/dumbartonhouse.