The G-4 plans, sets, and oversees policy used by all Army Logisticians throughout the world

The Army G-4 office's mission is to enable a ready Army by providing and overseeing integrated logistics policies, programs, and plans in support of Sustainable Army Readiness.

The G-4 is thrilled to announce the release of the December 2022 issue of Logistics Times, our biannual publication of the latest news and commentary from our professional logistics NCO Corps. This edition focuses on:

• Preparing multi-functional Sustainment NCOs for large-scale combat operations through training, education, and mentorship,
• Recognizing sustainment excellence in our ranks through lessons learned from this year's Combined Logistics Excellence Awards winners, and
• Ways to maintain persistent readiness through peer relationship building and self-assessment.
Other topics include overviews of industry-based broadening opportunities and ways to leverage the Whole Soldier Counseling concept to develop successful Army leaders.
Logistics Times complements the G-4’s existing NCO newsletter, The Snapshot, by providing a strategic, functional, and educational forum ensuring the Army’s Sustainment NCOs are ready to advance their careers while preparing to deploy, fight, and win our Nation’s wars.

You can read the December 2022 issue of Logistics Times here:
https://www.army.mil/article/262815/logistics_times_december_2022


The G-4 is thrilled to announce the release of the December 2022 issue of Logistics Times, our biannual publication of the latest news and commentary fr...

The Fall Edition of Army Sustainment Professional Bulletin has been published!

Focused on sustainment operations in perhaps the harshest environment, the Arctic, this season's edition includes coverage of liquid logistics considerations in extreme cold, interviews with senior leaders prepared to implement the Army's , our handy , and much more!

You can access and download a mobile version by going to https://alu.army.mil/alog/ on your computer, phone, or tablet.

Miller’s Logistic Advisor Team 5622 is employed in Thailand for a six month rotation designed to build combined readiness with the RTA and strengthen partnerships critical to a .

You can read more about how the Army is advancing key data-centric capabilities across warfighting functions through Breaking Defense’s recap of last week’s demonstrations in California!

Each October, the Army observes to highlight how energy resilience serves as a mission readiness enabler for our Soldiers. Thank you to the Assistant Secretary of the United States Army - IE&E for inviting the G-4 and G-4 Sergeant Major to support this critical initiative!

You can read more about the Army's efforts leveraging this resilience to drive our here:

Please join the AUSA Family Readiness Forum at 0930 EDT to learn about Army programs that will help enhance positive relationships and improve your quality of life!


Join us via livestream on our events page at 9:30 a.m. EST for Family Forum II: Building connections: Strengthening personal, family and community relationships

While you wait for the Summer Edition of Army Sustainment to be published in the coming weeks, you can check out the Spring Edition here https://www.army.mil/armysustainment

Focused on readiness from fort to port, the Spring Edition included a wide variety of insightful interviews and articles covering the most relevant topics on strategic, operational, and tactical readiness.

Be sure to read the edition's introduction by GEN Ed Daly, the Commanding General of U.S. Army Materiel Command, where the Army's senior sustainer offers insight regarding the criticality of setting the theater to all sustainment operations.


Simply put, setting the theater provides strategic depth for sustainment across commodities and all supply classes and ensures that our forces can move quickly to, and then throughout, a theater to accomplish their mission without a cold start to logistics. Read the full article by Gen. Ed Daly, commanding general of the U.S. Army Materiel Command. https://go.usa.gov/xSHjz

Congratulations to this year's Best of the Best winners of the U.S. Army Chief of Staff's Combined Logistics Excellence Awards! Through demonstrated expertise in maintenance, deployment, and supply operations, each awarded unit has shown their consistent ability to build Total Army lethality through sustained readiness.

Thank you to everyone who competed in 2022 - we're already looking forward to 2023! Army Strong! 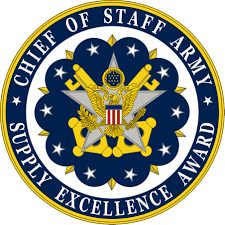 Tomorrow we will announce the "Best of the Best" award winners of this year's , so stay tuned!

Tomorrow we will announce winners and runners-up of the , so stay tuned!

Save the date! Tomorrow (28 July) from 1130 - 1330 the G-4 Sergeant Major will host a Town Hall covering the Army Commitment to Improving Overall Nutrition and Warrior Restaurant Modernization!

SMA Michael Grinston will offer opening remarks followed by a panel discussion and Q&A session regarding all things nutrition and wellness.

Congratulations to this year's winners and runners-up of the Army Award for Maintenance Excellence as part of the U.S. Army Chief of Staff's Combined Logistics Excellence Awards!

Tomorrow we will announce winners and runners-up of the , so stay tuned!

It is no secret that Soldier readiness builds lethality - with this in mind, the G-4 is excited to announce this year's winners of the U.S. Army Chief of Staff's Combined Logistics Excellence Awards (CLEA) throughout the week!

Sustaining readiness in maintenance, deployment, and supply operations is a cornerstone of the CLEA. Each of this year’s winners stood out from the crowd thanks to their remarkable contributions to the sustainment community. It will be an honor to highlight their professional excellence, and we’re already looking forward to next year’s competition!

We will announce award winners and runners-up across the CLEA's three categories of Maintenance, Deployment, and Supply Excellence on Tuesday, Wednesday, and Thursday, respectively. Be sure to watch this space on Friday as we announce and honor the top three "Best of the Best" awardees.

To learn more about the CLEA and its winners from 2021, be sure to check out last fall's edition of The Snapshot -https://api.army.mil/e2/c/downloads/2021/10/26/77d097ef/october-newslettervno-o.pdf

On this day 160 years ago, President Lincoln signed into law a resolution from Congress creating the Army Medal of Honor. Let us take time today to recognize the many brave Members of our Armed Forces and their countless acts of valor in combat.

To recognize several of these incredible individuals, below are six stories of Medal of Honor recipients who served as Army logisticians since WWII:

Near Isola Bella, Italy, on January 28, 1944, Technician 5th Grade Eric G. Gibson bravely led a squad of replacements through enemy fire. He destroyed four enemy positions, killed five German Soldiers and captured two others. Then T/5 Gibson secured the left flank of his company during an attack on a strongpoint. He was killed in action while engaging the enemy.

On July 29, 1944, during an enemy armored attack near Grimesnil, France, Sgt. Hulon B. Whittington assumed command of his platoon when the platoon leader and platoon sergeant became missing in action. Whittington mounted a tank, fired point blank and destroyed the leading German tank, which blocked all movement of the enemy convoy consisting of more than 100 vehicles. Whittington's actions inspired his unit to conduct a bayonet charge. When the medic became a casualty, Whittington personally administered first aid to his wounded Soldiers.

Pvt. George Watson was aboard a ship off the coast of New Guinea on March 8, 1943, when the ship was attacked by Japanese bombers and had to be abandoned. Instead of saving himself, Watson stayed in the water for a prolonged time, courageously helping others. Weakened by his efforts, he was eventually dragged down by the sinking ship and drowned.

Rather than leave when his mission was complete, Lt. Col. John U.D. Page, attached to the 52d Transportation Truck Battalion, chose to stay near the Chosin Resevoir and assist an isolated signal station. Between Nov. 29 and Dec. 10, 1950, Page rescued his driver by breaking up an ambush; created a tactical unit using Soldiers trapped with a Marine unit; exposed himself to enemy fire so casualties could be evacuated; and twice manned a machine gun on the rear deck of a tank and drove the enemy back. Page turned down a second opportunity to reach safety and, instead, returned to assist a departing convoy. When he charged the enemy ahead of the convoy, he was mortally wounded during hand-to-hand combat.

In An Khe, Binh Dinh Province, Vietnam on Feb. 23, 1971, Spc. 4th Class Larry G. Dahl's gun truck was sent with two others to assist in the defense of a convoy that had been ambushed by the enemy. The gun trucks entered the ambush area and immediately engaged the enemy. As the fighting subsided, an enemy soldier threw a hand gr***de into Dahl's truck. Instantly realizing the great danger, Dahl called a warning to his companions and threw himself directly onto the gr***de.

On Aug. 25, 1968, near Ap Nhi, Vietnam, Sgt. William W. Seay was on a resupply mission when his convoy was struck by North Vietnamese heavy weapons fire. Seay took up a defensive position and killed 10 Vietnamese soldiers. During the fighting, he left his protective cover twice to pick up a gr***de and throw it back at the enemy, saving the lives of many fellow Soldiers. After returning to his position the second time, Seay continued to direct his Soldiers even though he was seriously wounded. Weak from the loss of blood and with his right hand immobilized, Seay stood up and fired his rifle, killing three North Vietnamese, before he was killed by a sniper's bullet.

The July edition of the G-4 Sergeant Major's newsletter, “The Snapshot”, is now published! This month, we offer details to help smooth your PCS move as the peak season continues throughout the rest of the summer as well as a recap of how we celebrated the Army's 247th birthday! Additionally, this month's newsletter outlines how you can get published in the upcoming edition of "Logistics Times" in winter 2023.

You can check out past editions on the G-4's main website here: https://www.army.mil/g-4#org-newsletters

The spring edition of Army Sustainment detailed the Army's readiness posture - its accompanying Hip Pocket Guide outlines roles and responsibilities critical to our ability to Set the Theater and conduct Deployment Readiness Exercises.

You can download the latest edition and Hip Pocket Guide here -

The G-4 loved having the opportunity to get a first-hand look at all the fantastic work ongoing over at the 13th Expeditionary Sustainment Command earlier this week - thanks for hosting!

If you are doing a permanent change of station (PCS) move this summer, the Moving Your Personal Property Webpage at www.militaryonesource.mil/personalproperty has many online moving resources. Check out this 2:30 minute video from TRANSCOM for tips on navigating the page: https://youtu.be/0eOEhyXh9pg

Want to read about the latest Army and DOD improvements to the PCS process including simplified claims forms and refinements on how Soldiers and families input their desired pickup dates? Go here: https://www.army.mil/article/257684/dod_army_make_improvements_to_pcs_process

As part of the Army Birthday celebration on June 14, 2022, an Army Culinary Outpost Food Truck will be at the Pentagon Courtyard, from 11:00 a.m. to 2 p.m. Food trucks are operating at Army installations providing healthy and expedient meal options for Soldiers. Stop by the food truck, sample its offerings and celebrate the Army Birthday.
Learn more about the Army support for nutrition here: https://www.army.mil/.../support_for_national_nutrition... and from
the Joint Culinary Center of Excellence - https://quartermaster.army.mil/jccoe/jccoe_main.html
and Army Wellness Centers - https://phc.amedd.army.mil/Pages/default.aspx

Be the first to know and let us send you an email when U.S. Army Logistics, HQDA G-4 posts news and promotions. Your email address will not be used for any other purpose, and you can unsubscribe at any time.

"I believe in love at first sight, for you are the first person I saw when I opened my eyes and have loved you since that day, dear mum...." Unknown We celebrate Mother's Day with a musical performance of Brahm's Lullaby by Staff Sgt. Leslie Ostransky, Vocalist, and Staff Sgt. Grace Bauson, Harp. The United States Army Field Band Joint Base Myer - Henderson Hall

HHG Claims - Transferring to the Army 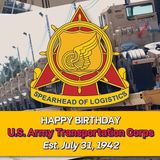 Logistics in the Information Age 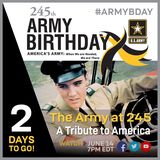 Here We Go, Get Motivated

A Special Day for a Special Person