Embassy & Consular Section of the Republic of Kazakhstan in Washington, D.C. Visit https://consular.

Wishing you and your family a blessed #Ramadan
May this holy month bring health, peace, and prosperity to all

On this photo: the Hazret Sultan Mosque, the Central Asia’s largest mosque, located in Nur-Sultan.

We are happy to share that 🇰🇿🇺🇸Open Skies Air Transport Agreement has entered into force, bringing high standards of aviation safety & expanding commercial partnership. It will strengthen P2P ties by encouraging affordable & efficient services to ✈️travelers.

The U.S.-Kazakhstan Air Transport Agreement signed on December 30, 2019, has entered into force. This bilateral Agreement establishes a modern civil aviation relationship with Kazakhstan consistent with U.S. Open Skies international aviation policy and with U.S. commitments to high standards of avia...

It has much to offer U.S. and Western businesses — and the Kazakhs are keen to develop equally strong ties with the West and the U.S.

Today, Rachel Vogelstein, of the White House Gender Policy Council, joined the #AIFC Kazakhstan's "Women's Economic Empowerment Roundtable Event via Education." She spoke about U.S. commitments to empowering women & girls, in all their diversity, & the importance of gender equity in Central Asia & beyond.

Photos from Ministry of Foreign Affairs, Republic of Kazakhstan's post

NUR-SULTAN – Kazakhstan has eased the rules on crossing state borders for foreign nationals, according to the Feb. 7 decision of the interdepartmental commission (IDC) on preventing the spread of the coronavirus infection, reports the Kazakh Foreign Ministry. According to the amendments, an IDC pe...

NUR-SULTAN – Thirteen routes have been created in the Imantau-Shalkar resort area in northern Kazakhstan, which is often compared with Switzerland due to the similar landscapes, said Daniyar Isayev, deputy head of the entrepreneurship and industrial-innovative development department of the North K...

NUR-SULTAN – President Kassym-Jomart Tokayev will deliver his address to the nation in mid-March, his spokesperson Berik Uali announced on Friday. The address, which usually takes place in September, is expected to announce political reforms for the near future. Tokayev is also expected to release...

The Man Who Led His Nation to Enlightenment: Kazakhstan Marks 150th Anniversary of Prominent Scholar Akhmet Baitursynov - The Astana Times

The Man Who Led His Nation to Enlightenment: Kazakhstan Marks 150th Anniversary of Prominent Scholar Akhmet Baitursynov - The Astana Times

NUR-SULTAN – From a teaching career to becoming the founder of the first Kazakh alphabet and establishing the first national newspaper, Akhmet Baitursynov left a significant mark in the history of Kazakh literacy and is rightly called Ult Ustazy (Teacher of the Nation). This year Kazakhstan will c...

The Ministry of Foreign Affairs of the Republic of Kazakhstan has received a letter from the international non-governmental organization Human Rights Watch (HRW) with information on cases of excessive use of force by law enforcement agencies during the January events in Kazakhstan. In addition, HRW has also published information about other abuses against detainees.
In this regard, we state the following.
The Republic of Kazakhstan condemns any possible cases of excessive use of force, unlawful detention, torture or ill-treatment of detainees.
President Tokayev has repeatedly stated that the investigation into the armed unrest must be impartial and conducted in line with the law. Firmly securing the rights of detainees and a fair legal process is indispensable.
The Head of State has called on the Prosecutor General’s Office and the Ministry of Internal Affairs to ensure strict compliance with the Constitution and the Criminal Procedure Code, which prohibit use of torture or other ill-treatment, while conducting the investigation.
All complaints of illegal detention and possible ill-treatment of detainees will be thoroughly investigated. A hotline has been set up to ensure citizens can receive relevant information and file complaints, including regarding actions of the law enforcement personnel. The investigating authorities verify all incoming information about violations. According to the data from the General Prosecutor’s Office, authorities have to date launched 98 criminal cases concerning complaints of the use of illegal methods of investigation and other violations of the rights of citizens.
The General Prosecutor’s Office and other state investigative bodies are ready and willing to thoroughly review each individual case raised by the public in Kazakhstan and internationally.
To monitor the protection of the rights of detained citizens, Human Rights Ombudsperson Elvira Azimova, as well as members of the National Preventive Mechanism for the Prevention of Torture (NPM) and the National Council of Public Trust have been provided access to penitentiary system facilities.
According to current information, regional NPM teams have made 97 independent monitoring visits to 83 facilities in 16 regions of Kazakhstan. The Human Rights Ombudsperson has received 48 citizen complaints alleging violations of their human rights, which are currently under review. Furthermore, at the request of the regional NPM teams, the access of lawyers and civil medics to the detainees has been ensured.
Reputable civil society representatives, including human rights defenders and lawyers, have recently established public commissions to investigate the January events.
Kazakhstan remains committed to its human rights obligations and is open to dialogue and cooperation with international nongovernmental organizations. In particular, the Minister of Foreign Affairs of Kazakhstan, Mukhtar Tileuberdi, has agreed to meet with the Executive Director of Human Rights Watch, Kenneth Roth.
Finally, Kazakhstan continues to engage actively with UN human rights bodies and mechanisms.

Kazakh Ambassador to the US Yerzhan Ashikbayev held talks with Assistant Secretary of State for South and Central Asian Affairs Donald Lu and Deputy Assistant Secretary of State for Democracy, Human Rights and Labor Kara McDonald.
American diplomats highlighted their support for the course of political and socio-economic reforms of the President of Kazakhstan Kassym Jomart-Tokayev, including the priority solution of issues of socio-economic inequality, the fight against corruption, and also welcomed the measures taken by the Kazakh authorities to ensure a transparent and thorough investigation of the January tragic events.
Expressing appreciation to the American partners for conveying full support for constitutional institutions, the Kazakh diplomat stressed that the Government of Kazakhstan is taking comprehensive measures for a constructive dialogue with the civil society and international partners to guarantee impartial investigation and ensure the implementation of the rule of law and respect for human rights.
Assistant Secretary Lu, in his turn, noted the commitment of the Joe Biden Administration to the further development of bilateral cooperation and stressed the US intention to provide practical assistance in the implementation of the planned reforms.

This Friday! Don’t miss your chance to discuss the postgraduate study and research opportunities at NU GSPP.

Our mission is to improve the quality of life of people in Kazakhstan and Central Asia by training leaders to improve governance through excellence in teaching, research, and executive development that focuses on key policy and leadership challenges. And we strongly believe that Good Governance Matters.

Be the first to know and let us send you an email when Embassy of Kazakhstan in Washington DC posts news and promotions. Your email address will not be used for any other purpose, and you can unsubscribe at any time.

Send a message to Embassy of Kazakhstan in Washington DC: 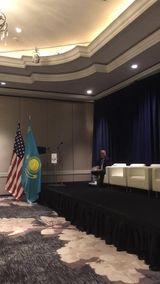 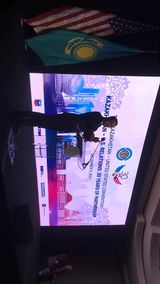 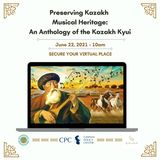 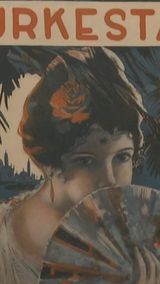 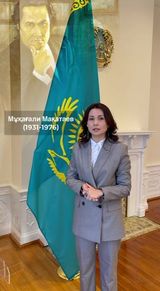 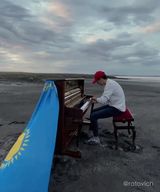 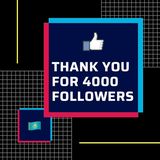 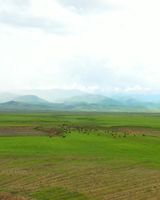 #Kazakhstan - the land of the Great Steppe

Kazakhstan’s Law Enforcement Agencies Continue to Provide Updates on Investigation into Tragic January Events https://www.gov.kz/memleket/entities/mfa-washington/press/news/details/316931?lang=en
We are thankful to Caspian Policy Center for thoughtful discussion. Ambassador Ashikbayev briefed on President Tokayev’s economic modernization & political liberalization agenda to build a more coherent & fair state, reassuring 🇰🇿Gov’s enduring commitment to respect human rights & fulfill intern’l obligations. Check out the quick recap: https://www.caspianpolicy.org/research/press-releases/protests-and-unrest-in-kazakhstan-what-happened-and-whats-next
Here’s an opinion by Ambassador Ashikbayev on the situation in #Kazakhstan published at Washington Post: ➡️Gov’t swiftly responded to legitimate demands; ➡️KZ is committed to the rule of law; ➡️Actions taken to secure the country & its people! https://www.washingtonpost.com/opinions/letters-to-the-editor/it-is-the-right-of-every-government-including-kazakhstan-to-secure-the-country-and-its-people/2022/01/14/0e7723bc-7267-11ec-a26d-1c21c16b1c93_story.html
Speaking to business reps. President Tokayev called on to team up in building a new #economic policy & follow the principles of: -fair competition -transparency of decisions -predictability of public policy -tax integrity of businesses -social responsibility of entrepreneurs Read more here 👉https://bit.ly/3qNxpBM
On Thursday Ambassador Ashikbayev gave an update on the situation in #Kazakhstan to compatriots & friends – Kazakh Community in 🇺🇸. United in common care for the homeland, participants discussed joint efforts in contributing to the steady development of their beloved country.
President Tokayev’s tasks to new Government
Speaking at the plenary session of the Majilis on Jan. 11 President Tokayev announces that the main phase of the counter-terrorist operation completed and the situation stabilized in Kazakhstan. https://astanatimes.com/2022/01/situation-stabilized-in-kazakhstan-as-hot-phase-of-counter-terrorist-operation-completed-president-tokayev-says/?fbclid=IwAR2GgVv35ue28u7Vce_HLbAFq7XZK5Iv9ujbexFgTUQyerfDCyvhQw9Z8OQ
January 10, 2022 is declared the Day of National Mourning for the victims of terrorist acts in Kazakhstan. Due to ongoing pandemic, a virtual Condolence Book is now available at the Embassy. The messages can be sent to [email protected]