Visit the guide below for information on EITC for individuals.
https://www.irs.gov/pub/irs-pdf/p4935.pdf

Collaborative Conversations: Building Relationships Between State ICWA Courts, Tribes, and Others to Improve Outcomes for Children and Families

Description
The Department of Health and Human Services Administration for Children and Families (ACF), in collaboration with the National Council of Juvenile and Family Court Judges (NCJFCJ), is hosting a web-based event about the Indian Child Welfare Act (ICWA).
This panel conversation will cover ICWA and the role of collaborative relationships between tribes, states, and others within their communities as a promising practice to improve outcomes for tribal children, their families, and communities. Panelists will include:

https://acf-hhs-gov.zoomgov.com/webinar/register/WN_wezGBmQ4RUWKmmSavrev0w
February 2, 2023
2:30 PM in Eastern Time (US and Canada)

ANA is happy to share that the Fiscal Year 2023 Notice of Funding Opportunities (NOFOs) are now published and live! The following funding opportunities are now available:

Applications for all five NOFOs are due March 31, 2023, 11:59 EST. Please refer to the funding opportunities on https://buff.ly/2E8nFqg Visit disclaimer page for all official updates.

Lone Tree shared information and responded to questions on how ANA can work within tribal and Indigenous communities across all regions.

Check out the newsletter this week!

Episode One: Preventing Violence Segment 2: Cultural and Community ConnectednessThis segment explores what culture and community have to do with violence and...

ANA is happy to announce that the Fiscal Year 2023 Notice of Funding Opportunities (NOFOs) are now published and live! The following funding opportunities are now available:

Applications for all five NOFOs are due March 31, 2023, 11:59 EST. Please refer to the funding opportunities on https://buff.ly/2QSxHSC for all official updates.

In coordination with , an open grant opportunity for Victims of Human Trafficking in Native Communities Demonstration (VHT-NC) Program Department of Health and Human Services Administration for Children and Families.

Today we remember Martin Luther King Jr. He was a social activist and Baptist minister who played a key role in the American civil rights movement from the mid-1950s until his assassination in 1968.

Check out this week's newsletter!

Want the best way to stay up to date with ANA and our partners? Check this out! Subscribe to our newsletter! Our ANA newsletter will be moving from a weekly to a monthly publication coming this Februa


Around the world, human trafficking has stripped nearly 25 million people of their safety, dignity, and liberty --

What is and what can you do if you’re in danger?

Show us you in support of !

January 11th is National Human Trafficking Awareness Day. To show your support in helping to raise awareness, join and wear blue. And don’t forget to post a selfie using . Spread the word! For more on happenings throughout the month of January, visit www.dhs.gov/blue-campaign/wearblueday.

Check out this week's newsletter and sign up to receive it by email!

The Administration for Children and Families (ACF) promotes the economic and social well-being of families, children, individuals, and communities with funding, strategic partnerships, guidance, training, and technical assistance.

ANA wishing you all the great things the year has to offer!

Be safe this holiday!

ANA wishes you good health, good times, and quality time spent with loved ones this holiday. ANA works each day to support tribal communities ensuring that tribal citizens benefit from all that is offered at ANA and ACF.

So have a safe and happy holiday!

On this day, the sun is at its lowest point in the sky, traveling across the sky world above us in a short stride, resulting in the shortest day and the longest night of the year in the Northern Hemisphere.

The winter solstice is an event that has been observed by many Indigenous peoples. While some have traditionally held special ceremonies during celestial events like the winter and summer solstices, others may have simpler ways of observing these moments.

In its period of darkness, the winter solstice is an opportunity to go inward with deep intention, to care for our spiritual selves, our bodies and minds, our loved ones and families, and to prepare for the longer days ahead.

The Administration for Children and Families (ACF), a division of the U.S. Department of Health and Human Services (HHS), promotes the economic and social well-being of families, children, individuals, and communities with funding, strategic partnerships, guidance, training, and technical assistance.

Check out this week's newsletter! It's full of resources, funding opportunities and information from ANA and our partner agencies!

Explore the more than 120 native languages that are being actively preserved and strengthened by the ARP grant projects funded by ANA by visiting our new dashboard!

Tips for coping with holiday stress

According to an HHS resource guide, the Mayo Clinic suggests the holiday season can often brings unwelcome guests — stress and depression.
You may be feeling additional stress, or you may be worrying about you and your loved ones' health. You may also feel stressed, sad or anxious because your holiday plans may look different since the pandemic.

But with some practical tips, you can minimize the stress that accompanies the holidays.

Stress and depression can ruin your holidays. Here's how to keep the joy alive.

Check out this week’s newsletter! You can also sign up to receive it by email!

ANA has taken a giant leap in language preservation by awarding ARP funding to some of the most hard-hit Indigenous communities. With the impact of COVID-19, many of these communities lost first-language speaking elders and with the additional funding provided by ANA, these languages can be saved and protected.

Visit the ANA website to see how these funds are changing many of our communities!

Welcome! You are invited to join a webinar: Celebrating International Day of Persons with Disabilities. After registering, you will receive a confirmation email about joining the webinar.

Celebrating International Day of Persons with Disabilities webinar provided by our Pacific region! Join us on December 8!

Join us as we open space to celebrate International Day of Persons with Disabilities with two Native community members who will be sharing their real lived experiences.

December is . Medical identity theft is when someone steals or uses your personal information (like your name, Social Security number, or Medicare number), to submit fraudulent claims to Medicare and other health insurers without your authorization.

Be the first to know and let us send you an email when Administration for Native Americans - ANA posts news and promotions. Your email address will not be used for any other purpose, and you can unsubscribe at any time.

Send a message to Administration for Native Americans - ANA: 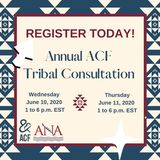 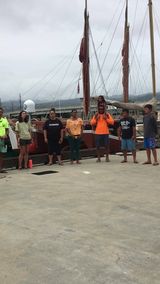 According to the National Institute of Justice, approximately 83% of American Indian/Alaska Native adults have experienced some form of violence in their lifetime, such as physical violence by an intimate partner, sexual violence, stalking, or psychological aggression.

The Administration for Native Americans - ANA recently funded the next evolution of the Yurok Language Program’s comprehensive effort to fully restore the everyday use of the Tribe’s first form of communication. Over the next three years, the Program will use the ANA award to make learning the Yurok language more accessible than ever before.

https://www.eventbrite.com/e/2021-national-native-american-language-summit-virtual-tickets-171225910307
Project Planning Season is here! Turn your vision for a community based project into a reality with funding opportunities from the Administration for Native Americans - ANA. Learn the fundamentals of how with us! The video below is an introduction to our Project Planning and Development Training, which is coming soon! Stay tuned for more information.

https://youtu.be/yx92xPKxdKk
Thank you Ka Paʻalana Staff for the love, support and dedication you all have for the keiki of this ʻĀina. My husband and I are taken back by all the effort you put in to make it possible for families like us that can't afford learning material (laptop), supplies (Kōkua kits) and food (food boxes) for our keiki. Because of all your effort, our son has the chance to learn from home and get a head start in his childhood education. There's no words that could honestly say how blessed and thankful we are to have you all a part of our life but most importantly a part of our son’s life and education. Thanks from the bottom of our hearts. — Ka Paʻalana Family Education Program parent share

Since the onset of the pandemic, raced to close the digital divide, the gap between those who have access to digital resources and those who do not. That’s why distributed 126 Lenovo Chromebooks and computer accessories to their Oʻahu and Hawaiʻi Island site participants in an effort to reach in Hawaiʻi. This , we mahalo supporters like Administration for Native Americans - ANA and Hawai'i Public Schools that help us meet the needs of our participants— mahalo nui loa!

To learn more, get involved, or support , visit our pidf.org and or contact us today.
x