Our great General Josiah Magama Tongogara has posthumously been honored with the
Great Commander of Zimbabwe Order of Merit!!!!.
This Award was conferred to him for his selfless dedication, bravery, military prowess and extraordinary leadership during the liberation Struggle. His widow, Senator Angeline Tongogara received the award on his behalf.

Honoring one of our dedicated foundation trustrees, General Zimondi. Thankyou for all you did for the foundation. Continue to Rest In Peace.

Senator A.K.Tongogara and family paying respects to the late General Nyikayaramba. He was a very active and dedicated trustee of the foundation. We thank you for all you did. Continue to Rest In Peace.

Celebrating another Heroes Day. We salute all the heroes and heroines who fought for the liberation of our dear country, Zimbabwe. Continue to RIP our General, Cde. Tongo! 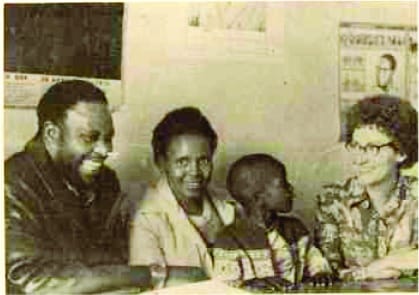 The JMT Foundation and the Tongogara family wish express their deepest condolences on the passing of Sister Janice Mclaughlin. She was a veteran journalist, family friend and a slawart supporter of the Zimbabwe liberation struggle. You lived an exemplary life sister and will be sorely missed. may your soul rest in peace. GOD BLESS YOU !

Another year has gone by, continue to rest in peace General Josiah Magama Tongogara.

Through the eyes of General Tongo. Visit the National Art Gallery, Harare

General Josiah Magama Tongogara we honour you today. We thank you for all your sacrifices. You are dearly missed.

Today we honor our fallen heroes and heroines, all those who gave up their lives for our nation's freedom. We thankyou for your selflessness and dedication.

Thankful for the honour bestowed upon our General Tongo by H.E. Mnangagwa and ZDF.

Josiah Magama Tongogara Barracks... We are honoured and humbled. Thankyou to our Zimbabwe Defense Forces http://www.herald.co.zw/govt-renames-all-army-barracks/

A fund-raising golf tournament to help young and gifted students was this Wednesday launched under the Josiah Magama Tongogara (JMT) Legacy Foundation which was established in memory of the late revered national hero and freedom fighter, General Josiah Magama Tongogara, the commander of the military campaign for the liberation of Zimbabwe.

The JMT Legacy Foundation unveiled a vibrant and dedicated fundraising committee headed by wife of the Commander Zimbabwe Defence Forces, Marry Chiwenga that will host a fundraising dinner and inaugural golf tournament on the 5th of November at the Borrowdale Brooke and Country Club.

Running under the theme 'Teeing off to a Brighter Future-Empowering the Youth Through Education', chairperson of the JMT Legacy Foundation fund-raising committee Marry Chiwenga says she is proud to be associated with such a noble programme and other initiatives that are benefitting a lot of underprivileged and needy students.

Trustee and last born daughter to the late national hero, Nyaradzo born after his death 36 years ago, who represented chairman of the JMT Legacy Foundation ambassador, Dr Simbi Mubako said the aim is to support and assist academically gifted students facing financial difficulties and help them develop leadership qualities.

One of the JMT Legacy Foundation beneficiaries Isaac Sharara, a 2nd year business studies and computing student gave a moving testimony how his life changed for the better with assistance from the foundation.

An auction of the late hero's portraits was conducted and raised a substantial amount for the foundation.

The foundation's scholarship programme established in 2013 has so far supported 89 students.

The foundation is registered as a non profit making organization in 2007 with the objective of promoting the values cherished by the late national hero who loved working with youth for education and leadership development.

The foundation supports disadvantaged students with good academic grades for leadership development by sponsoring tuition assistance and scholarships, and promotes development and entrepreneurial activities that strengthen economic empowerment among other activities.

The foundation appeals for support, contributions and donations in cash and kind to help fulfil its aims and objectives to honour the life of the late General Tongogara and his contribution to the liberation of Zimbabwe.

The foundation was established by Mrs Angeline Kumbirai Tongogara and has a board of trustees comprising prominent people, many of whom worked with the late general

Happy Heroes Day to you Zimbabwe

Happy Independence to our beloved Zimbabwe.

A letter of appreciation from our star student Isaac Sharara!

Today we honor our fallen heroes and heroines. The sons and daughters who gave up their lives so we can have a free Zimbabwe. The galant soldiers who selflessly gave up everything to fight so that we can enjoy the liberties we have today. We, the Josiah Magama Tongogara Foundation sat thank you comrades for all you did.

Be the first to know and let us send you an email when Josiah Magama Tongogara Legacy Foundation posts news and promotions. Your email address will not be used for any other purpose, and you can unsubscribe at any time.

My name is Alves Gomes, and I had very many meeetings with him both in Mozambique and London before and during Lancaster House Conference. Could you please help me with the addresses of the two houses he lived in London during the conference ? This is important as I am writing a book as a Tribute to Samora & Tongogara.
x

Other Harare government services (show all)