Welcome to the official Harris County Sheriff's Office page. Our mission is to provide help

HCSO units responded to an incident at the 3900 blk of Summit Valley Drive, near Addicks-Howell Rd & Westpark Tollway E.

Units determined an adult male suffered a gunshot wound and was transported by Lifeflight. The male was pronounced decreased.

Preliminary: an A/C repairman, believed to be doing service work at a home, was confronted by an unknown suspect. The male suspect shot the repairman. Motive is unknown. Suspect, described as a black male, large Afro-hair, red shorts, black t-shirt, fled the scene on foot. An active search is underway.

This National Police Week, take time to remember the law enforcement officers who have been lost in the line of duty. To all men and women in blue – thank you!

Yesterday, HCSO members and families of our fallen arrived in Washington DC.

Pct 1 deputies units responded to a shooting at the 7300 blk of Alabonson, near W. Little York. Gunshots were fired from a club across the street.

Upon arrival, units found a young teen (possibly 12 yrs) with a gunshot wound. He’s been transported to a hospital, unknown condition.

We held a cordon of honor and a police escort from Memorial Hermann The Woodlands Medical Center to Montgomery County Forensic Services for our teammate and friend, Deputy Robert Adam Howard, 27. He lost his life today after a fatal collision. Howard joined the Sheriff's Office three years ago and was an investigator in the Violent Gang Suppression Unit. Deputy Howard is survived by his wife and two young children. Please keep him and his family members and colleagues in your prayers.

Got GOAT???? If not, we may have located your animal. We currently have numerous goats missing their owner(s). Please call the HCSO Livestock Unit to see if we have your animal. 832-927-2969.

For years, this street in HCSO -District 4 Mission Bend, has been a parking nightmare for residents due to 17+ auto repair shops using it to parking customer vehicles.

So many families in Harris County are affected every day by the pain of the disappearance of a loved one.

We must stand together to make connections that can change lives!

On May 6, 2020, Sgt. Raymond Scholwinski passed away from COVID-19 complications. He was a 39-year veteran of the Harris County Sheriff's Office.

We hosted the 2022 Harris County Peace Officers’ Memorial Service at Crime Stoppers of Houston’s headquarters, along with our partners at the Harris County Constable Offices and Harris County Sheriff’s Office Foundation.
We paid tribute to fallen Harris County peace officers as part of an annual memorial service honoring those who have made the ultimate sacrifice of life in the line of duty.

We will be Live-Streaming this event on our page tonight at 6 pm.

To be notified when the broadcast begins, follow this page and set notifications to on for live feeds.

We look forward to the opportunity to honor and remember our Fallen Peace Officers and their Families.

In honor of National Corrections Officer Week, we celebrate our dedicated Detentions Teammates.

Our Detentions team is a hardworking and vital part of our community’s success. Thank you all for the quality of service you bring with you to work day in and day out!

May is #MentalHealthAwarenessMonth ! We are happy to announce our Harris County Sheriff's Office Green Badge initiative, in support of #MentalHealthMatters Our division consists of numerous #mentalhealth programs that better our response in patrol. Stay tune for more pictures of our team’s green badges!

Children's Day (El Día Del Niño) in Pasadena. Thank you Baker Ripley - each day you make a difference in our children's lives and the Harris County region.

Child Safety & Human Trafficking Awareness Event in West Harris County. Thank you Walmart for the partnership. HCSO is committed towards the safety of children and to ensure effective preventive action against human trafficking.

Adult male victim advised he was at the air pump when confronted by a suspect wearing a ski mask. The suspect robbed him of his vehicle. Suspect pulled a gun and victim tried to fight back by pulling a knife & the suspect began shooting him. The victim was able to stab the suspect during the altercation.

The victim was found to have about 18 gunshot wounds, none of wounds were fatal. He remains in ICU, in fair condition.

Subsequently, Mt. Belvieu Police Department was involved in a pursuit with the victim’s vehicle & was able to get the vehicle stopped in Chambers County. Suspect was still wearing the ski mask & in possession of the pistol.

Keiffer Fredrick Edwards (9-13-02) has been charged with Aggravated Robbery. Edwards is currently in the Chambers County Jail.

Edwards was recently in the Harris County Jail for Evading in a Motor Vehicle. He also has a pending Assault-Family Member charge in Harris County. Both charges are from April 2022.

Great work by patrol, investigators and our partner agencies! 👏🏼

The HCSO Military Liaison Office delivered a vanload of baby supplies donated by HCSO employees to Deputy Z. Hollis and his wife Mayra today.
Hollis serves with the Army National Guard and was called to active duty as part of the Joint Task Force Guardian Support Mission in the Southwest Border Region.
Mayra has spent most of her pregnancy alone and is due in May.

Mounted Patrol Deputy Daniel Cline’s farewell gathering. God bless you and your family on this new chapter and good luck! Thank you for your passion and dedication.

Also, thank you to Bo, your dedicated mounted companion. The countless hours you both spent together serving our communities were priceless. Both of you will be very missed. #HCSO #HCSOMounted

Be the first to know and let us send you an email when Harris County Sheriff's Office posts news and promotions. Your email address will not be used for any other purpose, and you can unsubscribe at any time.

In Memory of Deputy Almendarez

HCSO at the Rodeo

Ride along with Sgt. M. Carrizales with our Mounted Patrol Unit 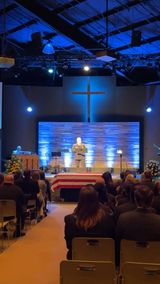 Ride Along With Deputy Rivera

Open Your Heart and Home to a Pet in Need